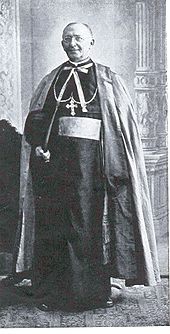 The bishop's coat of arms window, in the choir of the Neustadt an der Weinstrasse collegiate church . (Left the blue diocese coat of arms with a white cross, right a burning thorn bush )

Konrad Busch was born as the son of the businessman and later accountant Ludwig Busch and Elisabeth. Born small from Winzeln near Pirmasens . Grandfather Busch came from Alzey and was a general practitioner in Annweiler . The parents finally moved there, and later the family lived in Zweibrücken .

The boy first attended the Latin school in Annweiler, then as a pupil of the Episcopal Konvikt St. Joseph in Speyer, the state high school there. From 1867 he studied philosophy at the Lyceum in Speyer , then theology in Munich . Here he attended, among other things, the lectures of Professor Daniel Bonifaz von Haneberg , his future bishop.

In the war year 1870 he received the minor orders including the subdiaconate from Archbishop Anton von Steichele of Munich . On August 13, 1871, he was ordained a priest from Bishop Wilhelm Emmanuel von Ketteler in Mainz, since the Speyer Bishop Konrad Reither had just died. At first Busch worked as a cathedral chaplain in Speyer and worked as a repetiteur at the seminary and as a religion teacher at the teacher training institute.

When cholera raged in Speyer in the summer of 1873 and many deaths were to be mourned, Bishop Haneberg and his secretary cathedral vicar Peter Schwarz, cathedral pastor Dietrich Becker and cathedral chaplains Konrad Busch and Friedrich Molz personally cared for the sick in the apartments and hospitals despite the highest risk of infection .

In 1879 Busch became pastor of Annweiler, and in 1882 he was transferred to Landau . On May 30, 1889 Prince Regent appointed him Luitpold of Bavaria to the canon . At the same time he acted as cathedral priest. In 1895 Busch was promoted to dean , penitentiary and official .

In 1905 he gave the funeral sermon for the deceased Bishop Joseph Georg von Ehrler in the cathedral.

Konrad Busch was appointed Bishop of Speyer on March 21, 1905 by Prince Regent Luitpold. The episcopal ordination donated him after the confirmation of the election by the Pope on 16 July 1905 in Speyer Bamberg Archbishop Friedrich Philipp von Abert . In that year he was also raised to the nobility.

Bishop Busch was very interested in history and a member of the Palatinate Historical Society , which also dedicated a short biography to him when he died. From 1902 until shortly before his death, the prelate acted as vice chairman. He wrote several scientific treatises on diocesan history, including the choir rules and the Seelbuch of the Speyer Cathedral.

His cathedral dean, Franz Bettinger , was appointed archbishop of Munich-Freising in 1909. The last ceremony in which Franziskus Bettinger took part in his home country before moving to Munich was on August 1, 1909, the ordination of priests in the Speyer Cathedral. Dr. In 1956 Jakob Bisson describes in his book 7 Speyer bishops and their time an incident that he experienced himself. When the Speyer Bishop Konrad von Busch had already passed by, he was followed by the cathedral chapter with cathedral dean Bettinger - already appointed archbishop, but not yet consecrated . When Bettinger's gigantic figure became visible, Jakob Bisson heard a man next to him saying to his offspring in the broadest Palatinate: "The one where he kums now is taller than the bishop!"

In the last year of his life, von Busch was seriously ill and could no longer carry out his official duties. In 1909 he had taken another trip to Rome, and on December 8, 1909, the day he returned, he was ailing. In the ordinary session of February 21, 1910, he suffered a stroke, staggered home and was bedridden from then on. The left side of his body remained paralyzed. He died on Friday, September 9, 1910 at 6:30 a.m. in Speyer. Von Busch was buried in Speyer Cathedral on September 14th , in the presence of Archbishop Franz Bettinger from Munich as well as Bishops Ferdinand von Schlör , Würzburg, Johannes Leo von Mergel , Eichstätt, and Willibrord Benzler , Metz.

On his grave slab in the Speyer Cathedral in front of the King's Choir the following inscription was once to be read:

In the Palatinate wine town of Burrweiler there is the "Bischofskreuz" vineyard, which is named after a weather cross that Bishop Konrad von Busch personally consecrated there in 1909.

The upper part of the right choir window of the collegiate church (Neustadt an der Weinstrasse) bears a colored glass coat of arms of the Speyer bishop Konrad von Busch, under which the restoration of the church took place.