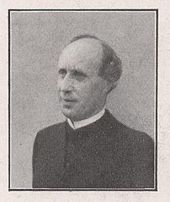 Jakob Bisson (born October 30, 1888 in Münchweiler am Klingbach , † March 8, 1963 in Speyer ) was a German Roman Catholic priest , of the Speyer diocese , division pastor in World War I , persecuted by the Nazi regime and Palatinate church historian .

Jakob Bisson lost his parents at an early age and was taken in as an orphan in the Nardini house in Pirmasens. After attending school and studying, he was ordained a priest on July 28, 1912 in Speyer, from the hand of Bishop Michael von Faulhaber , who 49 years later also Pope Benedict XVI. ordained a priest. He initially worked as a chaplain in the parish of Winnweiler , and during the First World War he worked as a pastor for the German troops on the western front for three years . In August 1914, on the 4th day of mobilization, he entered the Bavarian Army . There he worked first with the II. Army Corps , Field Hospital 16, later with the medical company of the 5th Infantry Division . Finally, Bission advanced to chaplain in the 3rd Infantry Division , then to the independent division pastor of the 5th Infantry Division . In his capacity as a military priest, he received the Iron Cross II. Class and the Military Merit Order VI. Class with swords.

After returning from the war, Bisson became cathedral chaplain on December 7, 1918, and cathedral vicar (bishop's secretary) and religion teacher at the teacher training institute in Speyer on January 20, 1922. From 1922 to 1924 he headed the diocese newspaper Der Pilger . In the period of separatism he strongly opposed the separation of the Palatinate from the motherland. On January 1, 1928, he was transferred to Zweibrücken as a religion teacher.

Jakob Bisson completed his studies with a doctorate in philosophy . The subject of his dissertation in 1931 was free will with Alexander von Hales . The significance of this scholastic is presented in this work to the effect "... that in his Summa Theologica he first used the whole philosophy of Aristotle as an auxiliary science." This is explained by the fact that since the end of the 12th century the writings of this philosopher have been on a larger scale than had previously become known. In Zweibrücken Jakob Bisson participated as a councilor to the political conflicts in the period before the takeover of the National Socialists in part in the 1,933th In this context he was put into protective custody from June 26 to July 1, 1933, in the regional court prison in Zweibrücken . From January 1, 1934, the clergyman worked at the Humanist Gymnasium Speyer, where he was suspended from school service from October 4, 1941 to October 9, 1942 because of his emphatic opposition to the Nazis.

As a teacher at the humanist school he taught religion and Hebrew . One of his students was the later university professor and Romance scholar Walter Selb , who dedicated one of his works to him.

Jakob Bisson was a member of the board of directors of the Society for Middle Rhine Church History.

As a papal honor, he received the title of Papal Chamberlain and the title of Monsignor . On July 29, 1962, he celebrated the golden jubilee of the priesthood. Just a day later, he suffered a stroke from which he did not recover. Jakob Bisson died on March 8, 1963 and was buried in Hauenstein . Bishop Isidor Markus Emanuel von Speyer personally attended the funeral.

His publications deal with the history of the Catholic Church in the Palatinate and in the Diocese of Speyer. The lasting value of these texts lies in the use of knowledge that was not recorded in writing and, especially as sources from the time of National Socialism, were considered to have been lost in the years after 1960. His main work Seven Speyer Bishops and their time 1870–1950. Contributions to the local church history. Pilger-Verlag Speyer 1956, is a local historical treasure trove and an indispensable source for every Palatinate church historian.

Jakob Bisson's main work, a standard source for the history of the Palatinate church

Obituaries from The Pilgrim