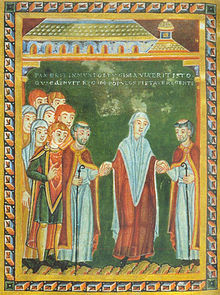 Gisela von Schwaben, also Gisela von Limburg (born November 11, 989, November 13, 990 or (according to the grave slab) November 11, 999, † February 15, 1043 in Goslar ), was German Queen since September 21, 1024 and since March 26, 1027 German Empress as wife of the king and emperor of the Roman-German Empire Konrad II. She is the mother of Emperor Heinrich III. Before her marriage to Konrad, Gisela was married and widowed twice.

Gisela was considered a beautiful and clever, but a little arrogant woman. The Gesta Chuonradi II imperatoris of Hofgeschichtsschreibers and -dichters Wipo According to Konrad she was a necessaria comes (necessary companion). This is supported by the high number of interventions in Konrad's diplomas.

Her mother was Gerberga von Burgund , daughter of Conrad III. of Burgundy from the Welfs family and granddaughter of the West Frankish Carolingian king Ludwig IV. Her father, the Swabian Duke Hermann II of Swabia , also boasted Carolingian descent. In this respect, Gisela was the eighth or ninth generation of the Carolingians . On her grave slab, which was found in 1900 when the imperial tombs were opened in Speyer, the date of birth is November 11, 999. According to research, this date is incorrect as it cannot be combined with the dates of their marriages.

Gisela concluded her first marriage around 1002 or 1004 with a Count Brun (probably Count of Braunschweig ), a relative of the Liudolfinger family , who died in 1008 or 1010. Around 1010 she married Ernst I from Babenberg , who in 1012 after the death of Hermann III. was enfeoffed by Swabia (Gisela's brother) with the Duchy of Swabia . He died in a hunting accident on May 31st (or March 31st) 1015. At the end of 1016 or at the latest in January 1017 she married Konrad II. This marriage was among others by Thietmar von Merseburg (VII. 62; older count: 45) regarded as an illegal marriage of relatives . A kidnapping of Gisela before marriage is not impossible, but historians regard it as very unlikely, as there are very few sources for this, which are also very far removed from these events.

She was not only the heir to the Duchy of Swabia, but obtained through her mother after the death of her uncle Rudolf III. (1032) also a claim to the Kingdom of Burgundy. This could be one of the reasons for the connection between Konrad and Gisela, as Gisela wanted to secure these claims and those of her children from the first two marriages.

The son Liudolf , who became Margrave of Friesland , and possibly a daughter by the name of Gisela come from his marriage with Brun .

From her second marriage Gisela had two sons, the dukes Ernst II (around 1010-1030) and Hermann IV (around 1015-1038) of Swabia, of whom the older one is particularly known for his rebellion and the minstrel poem " Duke Ernst " . First Gisela led the regency for him in Swabia. After her third - controversial - marriage and the bad relationship with Emperor Heinrich II , the administration was withdrawn and Archbishop Poppo von Trier was transferred. This was - in addition to the successful attempts to wrest the Burgundian inheritance from him and his brother in favor of the younger Heinrich - one of the reasons for the young duke's uprising. Rudolf's successor became Konrad on March 2, 1033, and not his stepson Hermann, whose sons were then withheld from the Duchy of Swabia in favor of Heinrich in 1038.

During their third marriage, she gave birth to three children: two daughters, Mathilde von Franken and Beatrix, and a son, who later became Emperor Heinrich III., Whose upbringing she devoted a great deal of attention to.

On September 21, 1024 Gisela was crowned queen by Archbishop Pilgrim of Cologne . Previously, Archbishop Aribo von Mainz rejected Gisela's coronation as queen on September 8, 1024 for unexplained reasons and only crowned Konrad as king. The coronation meant a considerable increase in rank for the queen. Of course she owed this to her husband.

In Rome, Pope John XIX. less than three years later, on March 26, 1027, Konrad and Gisela received the imperial crown. Although she could not pursue self-sufficient politics as Queen and Empress, she exerted influence on Konrad's politics in many ways. For example, she had a say in questions of filling leadership positions in the Church.

After the death of her husband in 1039, her influence waned. Gisela only appeared rarely and always with her son Heinrich III. in public before she died of dysentery on February 14 or 15, 1043 . She was buried next to Konrad II in Speyer Cathedral.

From his marriage to Brun

From his marriage to Ernst I.

From his marriage to Konrad II.