Coat of arms of the Austrian Babenbergs (Bindenschild), which originally goes back to the Eppensteiner , ( Scheibler's Wappenbuch , older part, around 1450–1480 )

The Babenbergs were an Austrian margrave - and ducal family of Franconian - Bavarian origin. The name refers to Bamberg in what is now Upper Franconia . They ruled Austria as margraves and dukes from 976 until they died out in 1246 - before the rise of the House of Habsburg .

The connection between the Austrian and the Franconian Babenbergers , also called the older Babenbergers, has been asserted again and again since the Middle Ages. The direct derivation from the Franconian Babenbergers is not pursued further by science today. Since the Austrian Babenbergs come from the Bavarian aristocracy, a relationship is obvious and is assumed to be through maternal ancestors. The descent from the Luitpoldingern is now assumed by various theories and evidence as likely. The first Babenberg Luitpold was probably a son or grandson of the Bavarian Duke Arnulf des Evil . He was also the brother or nephew of Count Berthold from Schweinfurt .

Neither did the family call themselves “Babenberger” during their lifetime, nor did the members have their nicknames that are common today. The nicknames of the Babenbergs were first used systematically by Ladislaus Sunthaym , who assigned them to the Babenbergs in his genealogy towards the end of the 15th century. 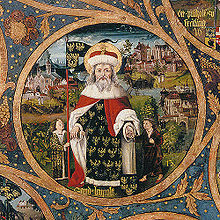 In 976 Luitpold was first mentioned as Count of the rebuilt Marcha orientalis (Ostmark / Ostarrîchi ), an area of ​​no more than 100 kilometers in length on the eastern border of Bavaria, which developed into the Duchy of Austria . Luitpold was loyal to Emperor Otto II. After the suppression of the Bavarian uprising in 976, he was appointed margrave. He extended his domain at the expense of the Hungarians to the east to the Wagram . To the north of the Danube it dominated only a narrow strip of land, while to the south clearing was carried out far into the foothills of the Alps .

994 the Margrave Office went to his son Henry I about. Heinrich, who continued his father's policy, was followed in 1018 by his brother Adalbert , whose remarkable loyalty to the emperors Heinrich II. And Heinrich III. was rewarded by many favors, and in 1055 his nephew Ernst . Under Adalbert, the Leitha , March and Thaya became border rivers; they were for many centuries or still are today.

The following Margrave Leopold II wavered in the investiture dispute , but ultimately sided with the Pope under the influence of Bishop Altmann von Passau . Heinrich IV , however, despite Leopold's defeat at Mailberg in 1082, was not able to drive him out of the march or to succeed him through his son Leopold III. in 1096 to prevent. In the dispute between Emperor Heinrich IV and his son Heinrich V , Leopold III. took the side of the son, but was drawn to the side of the emperor and married his daughter Agnes , widow of Duke Friedrich I of Swabia , in 1106 . In the period that followed, he tried to increase and round off his land holdings: he moved into dilapidated fiefs , bought and inherited. He built a residence in Klosterneuburg. In 1125 he refused the royal crown. His zeal in founding monasteries (especially in Klosterneuburg ) earned him the nickname of Pious and in 1485 he was canonized by Pope Innocent VIII . He is the patron saint of Vienna , Lower Austria and Upper Austria .

Fief flag ( banner of arms ) of the Austrian Babenberg since 1192, originally to Eppensteiner back and flag (and arms) of Austria was

The fifth of Leopold's sons was Otto , Bishop of Freising . His eldest son, Leopold IV , became margrave in 1136 and received from King Konrad III in 1139 . the Duchy of Bavaria , which Heinrich the proud had been withdrawn from the family of the Guelphs.

Leopold's brother Heinrich Jasomirgott became Count Palatine of the Rhine in 1140 and after Leopold's death in 1141 Margrave of Austria. After his marriage to Gertrude , the widow of Heinrich the Proud, he was enfeoffed with the Duchy of Bavaria in 1143 and resigned from his office as Count Palatine. In 1147 he took part in the Second Crusade . After his return he renounced Bavaria at the instigation of the new King Friedrich I. The son of Henry the Proud, Henry the Lion, initially regained Bavaria as the beneficiary. As a replacement for the loss of the Duchy of Bavaria, the margravate Austria, whose capital had been moved to Vienna in 1146 , was elevated to a duchy and Heinrich Jasomirgott to the duchy ( privilege minus 1156). Around 1155 he built the Babenberger Hof in Vienna as a new residence after moving his residence there from Klosterneuburg . This courtyard remained the residence of the Babenbergs until around 1275, when a new castle was built on the site of today's Swiss wing of the Hofburg .

The second duke was Heinrich's son Leopold V , who succeeded him in 1177 and took part in the crusades of 1182 and 1190. In Palestine he got into an argument with King Richard the Lionheart ; he captured Richard on his journey home and handed him over to Emperor Heinrich VI. He received 50,000 silver marks, half of the ransom paid by England, and with it he founded Wiener Neustadt , expanded Vienna and generally ensured economic growth. Leopold expanded the territories of the House of Babenberg by acquiring Styria according to the will of his relative Ottokar IV. He died in 1192, after which Austria fell to his son Friedrich and Styria to his other son Leopold. After Friedrich's death in 1198, Austria and Styria were taken over by Duke Leopold VI. reunited with the glorious.

The new duke fought against the Saracens in Spain , Egypt and Palestine , but is now more valued as a legislator, promoter of literature and founder of cities. Under him, Vienna became a center of culture in the Holy Roman Empire and in particular of the great school of minstrels . In his later years he had an argument with his son Friedrich. He died in 1230 in San Germano , where he had gone to fight between Emperor Frederick II and Pope Gregory IX. To make peace. 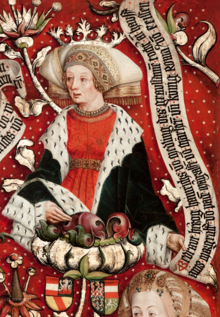 Gertrud, heir daughter of the Babenbergs, Margravine of Moravia and Baden. (Excerpt from the Babenberger family tree , Klosterneuburg Abbey)

The son of Leopold VI., Friedrich II. , Succeeded him as duke and got the nickname the arguable due to ongoing battles with his ministerials under the leadership of the Kuenringer, the kings of Hungary and Bohemia and with the emperor. He robbed his mother and sister's possessions and was hated by his subjects for his policy of oppression. In 1236 he fell under the imperial ban and was expelled from Austria. After the emperor's excommunication, he unsuccessfully negotiated with the Roman-German Emperor Friedrich II to elevate Austria to a kingdom. He died on June 15, 1246 in the fight against the Hungarians on the Leitha . With his death, the Babenbergs became extinct in the male line. Since the privilege minus also permitted a female succession, the succession in Austria and Styria was controversial among Friedrich's female relatives who were still alive. His niece Gertrud , daughter of his older brother Heinrich, who died in 1228, married Margrave Vladislav of Moravia, a son of the Bohemian King Wenceslaus I , in 1246 . This marriage had already been agreed in 1238, but Friedrich repeatedly postponed it. Vladislav died a few months later on January 3, 1247. Thereupon Gertrud married the Baden margrave Hermann VI. who also died in 1250. The son Friedrich , who came from this marriage , held the title Duke of Austria and Styria until his death in 1268, but was never able to achieve actual rule. The Austrian nobility turned to the Bohemian king in 1251. His son Ottokar then invaded Austria at the end of 1251 and married Margarete , Friedrich II's sister , in 1252 and thus became Duke of Austria. Gertrud then allied himself with the Hungarian King Béla IV and married Roman von Halicz, a relative of Béla, in 1252. After Roman was unable to assert himself militarily in Austria, he divorced in 1253 and returned to Hungary. Ottokar, who had succeeded his father Wenceslas I as King of Bohemia in 1253, reached an agreement with Béla IV in 1254 and left Styria to him. Ottokar defeated Béla on Marchfeld in 1260, who then ceded Styria to Bohemia in the Peace of Vienna on March 31, 1261. Ottokar, who separated from Margarete in 1261, thus ruled Austria and Styria. After Ottokar's death in the Battle of Marchfeld in 1278, the Babenbergs' inheritance fell to the House of Habsburg .

Numerous rulers from the Babenberg family are buried in the chapter house of Heiligenkreuz Abbey .

The family coat of arms of the Austrian Babenbergs showed two black lions one below the other on a golden background and is possibly related to the coat of arms of the related Swabian Staufers . The Mödling secondary generation line from Babenberg led three black lions one below the other on a golden background. The red-white-red fiefdom flag of the Eppensteiners came over the Styrian Traungau and the Styrian Otakare in 1192 to the Austrian Babenbergs. Eventually it became the red-white-red shield of Austria, the eventual center of power of the Babenbergs, and let the original Babenberg heraldic lions fade into the background and finally into oblivion. However, they have been preserved in the coat of arms of Carinthia , because when the Babenbergs died out in the male line in 1246, Duke Ulrich III. von Carinthia removed his panther coat of arms and created a claim coat of arms to underline his claim to the inheritance of the Babenberg heritage. The claim was based on the fact that Ulrich's grandmother was born in Babenberg and Ulrich himself was closely related by marriage to the Babenbergers through his two marriages. The new coat of arms showed the three black lions (Babenberg-Mödling) on ​​a golden background in front and the Austrian red-white-red shield on the back. In this form it was adopted by the Meinhardins as the subsequent dukes of Carinthia as a family coat of arms , and also by the Habsburgs as their legal successors, in the multi-panel coat of arms for the Duchy of Carinthia. 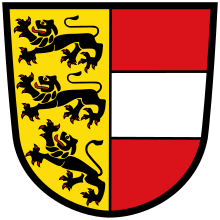 Heraldically on the right the three black lions from Babenberg-Mödling