Hainburg on the Danube

Hainburg an der Donau is a municipality in the Bruck an der Leitha district in Lower Austria with 6,837 inhabitants (as of January 1, 2020).

The city of Hainburg is located on the Danube between Vienna and Bratislava in the industrial district in Lower Austria. In the northeast of the city, the Danube forms the border with the Slovakian capital Bratislava ( Devín district , which borders on the hunting lodge settlement). There is no border crossing to Bratislava from Hainburg. Furthermore, Hainburg is the easternmost city in Austria, but the easternmost municipality in Austria is Deutsch Jahrndorf in Burgenland , which also borders Bratislava. Hainburg is also between the geographical border of the Carpathian Mountains (to which the Braunsberg still belongs) in the east and the Danube in the north.

View of Hainburg on the Danube around 1900

Hainburg around 1873 ( recording sheet of the state survey)

The first settlement possibly goes back to the Celts on the Braunsberg. However, there are indications of an earlier settlement by the Urnfield culture or during the Hallstatt period due to the strategically excellent location. Today's urban area was in the catchment area of Carnuntum , the capital of the Roman province of Pannonia , in which Mark Aurel also temporarily resided.

The first written mention was made in the Nibelungenlied in connection with Rüdiger von Bechelaren .

Emperor Heinrich III. around 1050 ordered the Heimenburg to be built on the Schlossberg . It was finally built by Bishop Gebhard III. von Regensburg, Duke Konrad I of Bavaria and Margrave Adalbert the Victorious .

With its 2.5 km long city ​​walls , three preserved gates and 15 towers from the 13th century, Hainburg has one of the oldest and best preserved city fortifications in Europe.

In 1108 the castle came into the possession of the Babenbergs . In the second half of the 12th century, the castle was expanded with the ransom for Richard the Lionheart . Around 1220–1225 the fortifications were reinforced. Among other things, the Wienertor and thus the largest medieval city gate in Europe was built. The lower part was built in the first half of the 13th century, the upper part in 1267/68 by Ottokar II of Bohemia .

On February 11, 1252, the sister of the last Duke of Babenberg , Friedrich II, Margarethe von Babenberg , married the Margrave of Moravia and later King of Bohemia Ottokar II in the castle chapel on the Schlossberg .

In 1278 Ottokar lost the Battle of Dürnkrut . The castle came into the possession of the Habsburgs . They pledged the castle to various owners. The city was neglected and lost its importance. The castle became the property of the city in 1629.

In the course of the first Turkish siege of Vienna , the Ottoman army crossed the border near Hainburg in September 1529. During the conquest, the city and castle were devastated.

On July 11, 1683, in the “second Ottoman campaign” ( Great Turkish War ), the city was captured and completely destroyed, the castle complex and fortifications suffered severe damage. The population tried to escape through the Fischertor into the Donauauen, but the gate wings could not be opened in time. Mass panic and slaughter broke out in the narrow alley in front of the Fischertor (the alley is now called “Blutgasse” in memory of the massacre). According to tradition, in addition to the then city population of approx. 4000 people, there was also an approximately as large number of people seeking protection from the surrounding area in the city. Of these over 8,000 people, all but 100 were killed. One of the few survivors was the Wagner journeyman Thomas Haydn, grandfather of Joseph and Michael Haydn .

In 1709, Count Löwenberg repaired the castle chapel. In 1784, Joseph II established a tobacco factory in the city with the tobacco patent , thereby establishing tobacco processing in Hainburg, where cigarettes and smoking tobacco were produced until 2011. The city was almost completely repopulated.

In the 19th century, Hainburg also became a garrison town , where officer candidates are trained. After the First World War , the city became Austria's easternmost city in 1918 .

During the Second World War , the city was almost spared from attacks. In 1945 the death march of the Hungarian Jews who had been conscripted as slave labor to build the south-east wall led through Hainburg.

After the war, the tobacco factory was practically one of the few sources of income for the new republic (in 1945 more than half of the tax revenue was covered by the tobacco tax). Although occupied by the Soviet Army , Hainburg was also the first port of call for the German-speaking population in Slovakia and Hungary .

In the 1960s, a viewing road was built on the Braunsberg, which from this point on became the “ Iron Curtain ” observation tower . From 1975 the old castle complex was gradually rebuilt.

In 1984 the then DOKW (now part of the Verbund group) wanted to build a power plant in the Hainburger Au on the northern side of the Danube. The protests were so massive that after the occupation of the Hainburger Au and a dispute with the gendarmerie forces, the federal government finally withdrew the project. Today the area is part of the Donau-Auen National Park .

Since 2009 the city has also been connected to the public transport system of the city of Bratislava ( Dopravný podnik Bratislava ). Line 901 operates on the Bratislava - Wolfsthal - Hainburg route.

In 2017, the city of Hainburg was named the most culture-friendly municipality in the Bruck an der Leitha district by the Culture.Region.Lower Austria .

On September 1, 2018, a pioneer jet boat of the armed forces had a boat accident on the Danube. In the course of a girl camp, 8 young participants went along, a boat capsized in a wave, 2 women, 18 and 22 years old, were caught under the boat by their life jackets for 39 and 45 minutes respectively and were seriously injured. The criminal case against the skipper was concluded with Diversion in May 2019.

Since the price of land in Bratislava rose sharply in the 2000s, many Slovaks move to the not far away Hainburg, whose population development was previously rather negative. 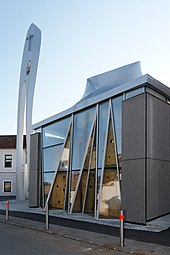 Hainburg castle ruins on the Schlossberg

Hainburg is the starting point of the Zentralalpenweg 02 , an Austrian long-distance hiking trail that leads from here to Feldkirch in Vorarlberg. Also for the Eastern Austrian Grenzlandweg 07 from Nebelstein in the Waldviertel to Bad Radkersburg through the municipality.

The municipal council has 29 members.

Sons and daughters of the township

Cities and municipalities in the Bruck an der Leitha district