The older pre-Roman Iron Age is known as the Hallstatt Period or Hallstatt Culture or Older Iron Age in large parts of Europe from around 800 BC. Chr. Designated. The border to the subsequent La Tène period is 450 BC. BC, but in fact the transition took place smoothly over several decades.

The epoch was named in 1874 by the Swedish prehistorian Hans Hildebrand after the burial ground above Hallstatt in the Salzkammergut in Austria, who proposed the division of the Iron Age into a Hallstatt and a Latène period. The finds from the eponymous location Hallstatt are divided into the stages HaA to HaD . HaA and HaB still belong to the Urnfield culture - only HaC and HaD correspond to the Hallstatt period.

As early as 1881, Otto Tischler had used primers from graves to make chronological considerations about the Northern Alpine Iron Age. Moriz Hoernes used the term Hallstatt culture in 1905.

HaC is referred to as the older, HaD as the younger Hallstatt period. The dating is now mainly supported by dendrochronology . For the beginning of HaC, woods from the wagon grave of Wehringen (Augsburg district) provide a key date, with 778 ± 5 BC. BC (burial mound 8). Despite the lack of an older dendrodate for HaC, the convention remains that the Hallstatt period coincided with the advent of iron technology around 800 BC. To let begin. The radiocarbon v may be due to the so-called "Hall Instead plateau" between about 750 and 400th Chr. Do not contribute to the specification, since in this time range no temporally resolvable measured values ​​are achieved.

On the basis of the rapidly changing primer fashion , HaD could be divided into 3 levels (D1 – D3). In HaD1, boat and snake fibulas are predominant, in HaD2 the timpani fibula and in HaD3 the double timpani and foot ornamental fibula. The transition to the La Tène period is linked to the appearance of animal primers, Certosa primers and Marzabotto primers. 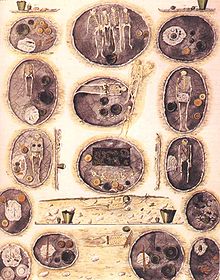 The Hallstatt culture usually stands for the period of the older Iron Age . In 1846, Johann Georg Ramsauer discovered and partially excavated an extensive burial ground on the Salzberg near Hallstatt . He had the furnishings of each individual grave documented with excellent drawings, a rarity in the early days of archeology .

The burial ground lies in a high valley above Lake Hallstatt . In the area you can find traces of settlement that go back to the Neolithic . The main phase of colonization extends from HaC to LtA . After that, Hallein- Dürrnberg seems to have taken the leading position in salt mining.

The burial ground includes over 1000 graves. 55% of them are body graves , 46% cremation graves . 26% of the graves are arms graves, which were mostly created on the outer edge of the burial ground, while the unarmed graves are in the middle. Brooches , belts and jewelry were found in women's graves, needles and weapons in men's graves.

Expansion of the Hallstatt culture

Remnants of the Hallstatt culture have been found from north-east France to the north-west of the Balkan Peninsula . In 1959 , Georg Kossack divided the Hallstatt culture into a western and an eastern district. The Westhallstattkreis includes NE France, southern Germany, the Middle Rhine region, Bohemia and Upper Austria; The Osthallstatt district includes Moravia, Lower Austria, Styria, western Hungary, Slovenia and northern Croatia.

This assignment was not made on the basis of different languages or dialects , as these have not been handed down, but is based on the forms of material culture and burial customs. If in the west important personalities were buried with sword (HaC) or dagger (HaD), in the east they were given a battle ax with them in their graves. In the west there are rich chariot graves, while in the east the warrior was buried with his complete armament, including helmet, breastplate etc.

Since no written documents have survived, it is unknown which language the makers of the characteristic material culture spoke. At the beginning of the 20th century, the cultures in the Caput Adriae region were equated with the Illyrians , now the Osthallstatt culture is often assigned to the Celts . However, it is now questionable whether it is possible to equate material culture, language or even biological origin.

During this time, a clear hierarchy of society can be determined, which was reflected in richly furnished burials under burial mounds, such as the grave of Hochdorf an der Enz (Baden-Württemberg), in some cases with the addition of wagons and harnesses ( chariot grave ). The largest central European barrow of this time is the Magdalenenberg in Villingen .

In the 8th century BC Iron was also used in Central Europe. The old long-distance trading system for trading copper and tin collapsed. New traffic routes with new trading stations were formed. The trade in iron created a new upper class who invested their wealth in Mediterranean imports and "princely seats" (especially in Baden-Württemberg, Switzerland and eastern France). Instead of the large settlements customary in the Bronze Age, individual farms were created, especially in Bavaria. These manor houses signaled a new claim to property and the need for demarcation and representation.

The burial rite changed from the uniform urn burials of the late Bronze Age to sometimes pompous graves. Here, too, a need for representation made itself felt with the magnificently furnished large burial mounds. These mounds served as a burial place for one, rarely several generations. 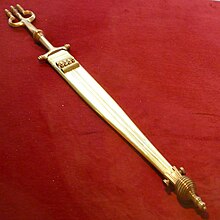 The classification of the settlements of the upper class as "princely seat", divided into castle and lower town, is controversial. Wolfgang Kimmig (1910–2001), prehistorian at the Eberhard Karls University of Tübingen, coined the term especially for the Heuneburg on the upper reaches of the Danube, his colleague Manfred Eggert (* 1941), also at the University of Tübingen, rejected the term after recent research on the outlying settlement the Heuneburg, at the Ipf and in Hochdorf an der Enz and develops a more differentiated picture of the Celtic central places. From 2004 to 2010, the settlement structure of the Hallstatt period in Baden-Württemberg, eastern France, Franconia, Hesse and western Bohemia was examined in the priority program “Early Centralization and Urbanization Processes” of the German Research Foundation .

Kimmig had given three criteria to classify a place as a "princely seat":

Since this system is quite flexible, a few fragments of imported ceramics were enough to designate a site as a “princely seat”. For example, Attic pottery was found in Bragny-sur-Saône , but it is a lowland settlement and not a fortified hilltop settlement. The excavator Guillot then interpreted the settlement as a trading center, while Spindler saw it as a “princely seat”.

Eggert sees the problem in the fact that the princely seat concept is based on a certain type of settlement. But it is questionable whether the “princes” of the Hallstatt period were determined to be of a certain type.

Finds of Greek ceramics , Etruscan bronze vessels in rich tombs and in fortified settlements and also Massaliotic wine amphorae show contacts with the Mediterranean, especially the proto-Celtic Canegrate culture along the Rhone river to Massilia and Liguria and in the area of ​​the Golasecca culture . In the eastern Hallstatt district, contacts from the Fritzens-Sanzeno culture to the Villanova culture can be proven.

Iron was initially used sparingly in the Hallstatt period and only caught on in the Latène period. Finds of special horse snaffles and daggers with openwork handles show that Hallstatt C1 may have had contacts with the steppe zone ( Thrako-Cimmerian horizon ) (see Thracians , Kimmerians ), but probably with the Gava culture , which in turn conducts brisk trade with the steppe.