The title of this article is ambiguous. For the heraldic figure see amphora (heraldry)

Amphora from the Eastern Mediterranean, approx. 750–600 BC Chr.

An amphora or amphora (from ancient Greek ἀμφορεύς amphoreus 'two-handled clay vessel'; formed from ἀμφί amphí 'on both sides' and φέρειν phérein 'carry') is a bulbous, narrow-necked vessel with two handles, mostly made of clay, but also of metal (bronze, silver , Gold). Originally, two handles were supposed to make it easier to carry. Amphorae are among the ancient vases .

An amphora is any pottery that has two handles and whose base, which often consists of a point or a button, makes it difficult or impossible to hold it upright.

The amphora is also a unit of measurement . The volume as a Roman measure of capacity is one Roman cubic foot, which is about 26.026 l .

Amphorae were used in ancient times as storage and transport vessels for oil , olives and wine as well as for honey , milk , grain , garum , tropical fruits such as dates and others. They were produced in those regions in which the goods to be transported were produced, for example where wine or olive cultivation took place. Depending on the content, the volume is different, capacities are between 5 and 50 liters.

Often they were thrown away as one-way containers after transport, so the Monte Testaccio in Rome consists largely of amphorae fragments. Other specimens found a new use, for example as an urn in cremation burials or to cover the dead in body graves .

Today amphorae are only made for decorative purposes, for example as a vase . The amphora still plays a special role in the production of special wines, the so-called "amphora wine". This expansion is particularly popular with "biodynamic wines", but sulphurized wines from Georgia are also often expanded in special amphorae. See also: Quevri wine .

A change in shape and frequent inscriptions offer dating options. Absolutely datable finds from shipwrecks and other closed finds allow a chronological classification. The chronology of the pre-Roman Iron Age of Central Europe also includes the amphorae chronology .

As the origin and content of many amphorae forms are known, archaeological finds also allow the reconstruction of trade connections . Numerous amphorae also have amphorae stamps.

Belly amphora of the Andokides painter , Athena (standing) and Herakles (lying), Munich, Staatliche Antikensammlung 2301 A (around 520 BC)

There are different types of amphorae that were in use at different times. Some had a lid. The following types are examples of fine ceramics of the archaic and classical times. Certain types can also be found in Toreutic.

In the neck amphora, the handles are attached to the neck, which is separated from the stomach by a clear kink. There are two different types of neck amphora:

Some special forms of the neck amphora have certain peculiarities:

In contrast to the neck amphora, the abdominal amphora does not have a separate neck, rather the abdomen merges into the neck in a curve. From the middle of the 5th century it was hardly produced.

The pelike is a special form of the abdominal amphora that appeared towards the end of the 6th century. With her, the belly is offset downwards, so the largest diameter is in the lower area of ​​the vase body. The low center of gravity and the wide base give these vessels a particularly stable stand.

Similar to ancient amphorae are the Amphoriskos and the Pithos . 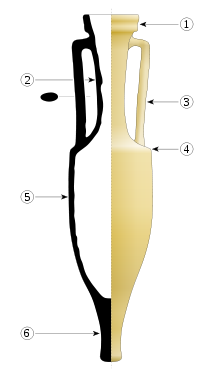 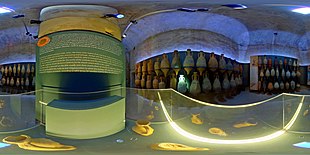 Roman amphorae were mainly used for the transport and storage of basic foodstuffs such as olive oil , wine, fish sauces , fruits and grain. The capacity was often around 25 to 26 liters, which explains why the term amphora has become an important unit of measure for liquids over time (26.2 liters). Large bulbous olive oil amphoras from the Baetica of the Dressel 20 type with a content of 70 l could sometimes also reach a total weight of 100 kg. Occasionally stamps have been affixed to these, although research is uncertain whether these were made by the amphorae pottery or by the producer of the olive oil. Like the painted or carved numbers and letters ( graffiti or tituli picti ), they are an important epigraphic source for economic history.

Until the 1960s, amphora stamps and shapes were the main focus. In the 1970s and 1980s, international discussion forums on amphora research, including typology and chronology, took place. Around 1990 the amphorae from Augst / Kaiseraugst were evaluated for the first time, which served as the basis for the processing of amphorae from Mainz.

As evidence of a past commercial and consumer good, the Roman amphorae represent important potential information carriers on the economic history of the Roman era and provide information about the consumer behavior of the population at that time. The amphorae went unnoticed for a long time. The amphorae, like the rest of the ceramics, are often classified according to shape, origin and also according to content, since their number and variety is too great to be determined according to shape or origin.

At the end of the 19th century, the German archaeologist Heinrich Dressel established the first typological classification of the amphorae known at the time. The types named by him bear his name, supplemented by a numerical designation that marks the type of amphora (see picture example “Dressel 1B”). In part, its classification is still used today as the basis for the designation of the various types of amphora: Wine amphorae, such as Dr. 1, Dr. 2-4, Dr. 5, and oil amphoras, such as Dr. 20 and Dr. 23, will continue to be named after him (Dr. = Dressel). Dressel's work arose, among other things, from studying Roman finds, including Monte Testaccio, one of the largest complexes of Roman amphorae finds, and was published in the Corpus Inscriptionum Latinarum due to the small inscriptions . Other Roman amphora types are named after researchers such as the Italian underwater archaeologist Nino Lamboglia or sites such as Augst .

The containers were mostly produced where they were needed for filling goods and from where they could be transported to their sales areas and destinations in a convenient manner. From the shape and origin of the amphorae it is possible to determine the transported products and their trade routes.

The scientific investigations into the manufacture of the amphorae are used to determine the origin of the clay mixture and the firing temperature. First it is checked which and how many types of clay were used in the production and whether the vessels have a natural sedimentary structure, or whether additional leanings have been added to the clay mixture. Then the firing temperature is determined. Although the weak and overburn samples also exist, a normal fire temperature of approx. 950 ° C was aimed for for most of the Italian amphorae.

Amphorae were mainly used as a means of transport, storage or as grave goods. But in antiquity they were mainly used to transport certain foods, so to speak as the containers of antiquity. The amphorae were filled with various goods in the south and were specially traded in the north, where due to the different climate, corresponding products could not be grown and manufactured. The main trade routes via waterways were in the Mediterranean. Tall ships had space for up to 10,000 amphorae as they could be stacked several times. As a rule, the same product was filled into the same containers. There are only indications of unusual amphora contents in individual cases. The goods imported in the amphorae include, for example, olive oil from southern Adriatic Italy (Brindisi) and North Africa (Tripolitana I), pickled olives from Morocco (Schörgendorfer 558), wines from Catalonia, southern France, Italy (Dressel 2-4), Crete, Rhodes (Camulodunum 184) and North Africa, fish sauce from Upper Adriatic Italy (Dressel 6A) or figs and dates from Egypt and Syria.

Either the amphorae of one type dominate within a product group or there are amphorae of different shapes in more or less equal quantities. It is noteworthy that once they had fulfilled their function of transporting goods, they were not used in the same way a second time. They were either disposed of as garbage without further use or converted into coffins, urinals, building materials or even antique Molotov cocktails. They were attractive for re-use because of their mass availability. Almost 6,000 amphorae were found in Augst and Kaiseraugst, 5,000 in Mainz, 7,500 in the Mainz area, 1,500 each in the legion camp of Dangstetten and in Neuss. In addition to the written and image sources, the archaeological findings and finds provide information about their diverse areas of application. Some of the most famous examples of the rubble mounds or rubbish dumps, which consist of amphorae, would be the rubble mound of the legionary camp on the Kästrich in Mainz and the amphorae depot at Dimesser Ort and the Hopfengarten in Mainz.

Graffiti on amphorae in Mainz

Certain stamps called graffiti or marks ante cocturam are pressed into the as yet unfired amphorae . The Mainz amphorae have more than 200 scratches and marks. Only a few of them allow statements to be made about product labeling and product owners. Graffiti and brands ante cocturam are related to the production of containers and do not refer to the goods to be filled or to their future owner.

Numerous post cocturam scratches are so shortened or fragmented that an interpretation is not possible. The graffiti post cocturam mainly contain dimensions and name people or groups who are to be interpreted as possible product owners . The graffiti convey different information than the brush inscriptions.

Company signs such as trident, anchor, palmette or star provide additional information about the origin of the amphorae.

Distribution of the amphorae

Unlike the imported tableware, the amphorae are pure transport containers that are found in settlements, graves and shipwrecks and largely come from long-distance trade. Their geographical and sometimes wide spread corresponds to the distribution and sales of the content. Therefore, the delivery areas of these amphorae are shown in the distribution maps, not the production areas, which are only localized by the stamps or scientific investigations.

Analyzes of the remains of the contents determine the form, chronology, origin and imported goods (mostly Mediterranean foods). This applies in particular to the amphorae of the early and middle Imperial Era, while in late antiquity the relationship between form and content is not always clear.

With a few exceptions, the mapped sites are settlement finds, i.e. amphorae that were emptied and finally thrown away as part of settlement activities and that have become known from literature and through autopsy. However, the distribution of the amphorae reflects - as always with archaeological maps - the state of research. Distribution maps of amphorae have so far mainly been available for the Mediterranean region. The distribution and thus the questions of sales areas and trade routes in the provinces north of the Alps have not been dealt with very much.

In addition to the pointed amphorae used for trading, transport and storage of goods, there are occasionally higher quality amphorae, for example made of glass and metal. These amphorae usually have one foot. The shape of the amphora was only rarely taken up in Roman times, sometimes in the style of a pelike ; other forms of vessels (such as pitchers) are much more common.

The Portland vase with its cameo glass relief images was in the 18th and 19th centuries. Century had a strong role model effect on the art of that time.

Forms and types of Greek ceramics