The title of this article is ambiguous. Further meanings are listed under tripod (disambiguation) .

Tripod (altgriech. Τρίπους tripous) is generally the term used for a Tripod vessel or furniture, in particular, but for a frame to which a vessel can be placed. Tripods can be found in almost all times and cultures. In addition to the (cooking) kettle, they were part of the basic equipment of the migrant peoples. They later became symbols of victory over the enemy's house and hearth; they were therefore often publicly displayed as a victory prize and placed under the care of a deity as a consecration gift .

The tripod was best known for its function as the seat of the oracle priestess Pythia in Delphi . For the Chinese tripod see under thing (vessel) .

A geometrically decorated clay tripod from the 9th century BC. (The burial object imitates a more valuable bronze device.)

The following manifestations and phases can be distinguished for the Greek cultural area:

The tripod of Delphi 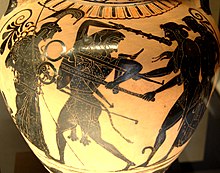 Heracles and Apollo fight for the tripod. The vase picture shows a Greek tripod (end of the 6th century BC)

The introduction of the tripod as an object of worship in Delphi is possibly due to the worship of Athens by the Cretans, to whom the establishment of both the Apollo and Athena sanctuaries at Delphi is ascribed. Several ancient works of art, including the relief on the gable of the Siphnian treasure house in Delphi, implement a myth according to which Herakles stole the tripod from Delphi from his half-brother Apollo . He had come to Delphi for atonement after killing his children and Iphitus in a fit of delusion . However, since murderers had no access to the sacred precinct, he was turned away and forced to enter and abduct the tripod to force his rehabilitation. There was a fight with Apollon, which was only ended by the intervention of Zeus . The city of Gythion was founded in the place where the reconciliation took place .

The tripod as a device of the mantic

The tripod is closely related to the cult of Apollo. Whether Pythia is basically to be presented on a seat that was placed with its three legs above the crevice from which the inspiring gases rose, or whether she could also have sat on a kettle that was in turn placed on the tripod is controversial.

In any case, it can be assumed that there was a connection to the oracle of Delphi even before the Pythias were installed. Due to the close relationship between the deities Apollon and Dionysus , the custom of setting up tripods as consecration offerings also passed from the Apollo to the Dionysus shrines, while other deities were only given tripod donations in exceptional cases and as a rule on the instruction of Apollo. Although it was also used as an anathema , the tripod, insofar as it was assigned importance beyond practical everyday life, was always related to the belief in oracles and divine inspirations.

The tripod in Goethe's Faust

In the last scenes of the first act of Faust II, Goethe also uses the tripod as a symbol of deep knowledge, which the magician and seer Faust is supposed to open with a key on his descent into the underworld, the "walk to the mothers" . A reference to the equilateral universal triangle , which according to Plutarch (Decay of the Oracle, Chap. 22) consists of 183 worlds, and to the area within the triangle, the field of truth, cannot be ruled out; at least Goethe gave his interlocutor Johann Peter Eckermann a reference to Plutarch.

According to another interpretation, the key is to be seen as a phallic symbol and the tripod as a woman's womb . Faust's evocation of the ghostly apparitions of Paris and Helena would be understood as a symbolic act of procreation and placed in a certain context with the theme of "mothers".

Finally, it should be noted that the entire scene is in an ironically broken context: Faust is supposed to conjure up the ghost figures at the request of the imperial court and for its entertainment; Mephisto initially declares himself, similar to the first part of the tragedy with Faust's desire for the pure, innocent Gretchen, as powerless and not responsible and then provides his friend - as he calls Faust himself in this context - with the necessary props. In the prompt box cowering, he then followed Faust's spirits demonstration. This can be made possible by a magic lantern , which, however, does not project its image onto a wall, as is usually the case, but onto the smoke rising from the tripod. 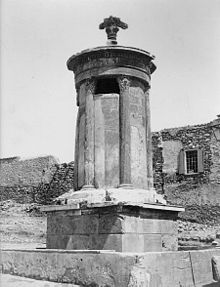 Both the three-legged base and the metal cauldron of a tripod were valued gifts and expensive valuables. The units of value τριπους and λεβης (cauldron) on coins from Knossos and Gortyn prove that the early tripods must have been real means of payment. The high value is also emphasized several times in the Homeric epics and is even given quite precisely through comparisons. In the Odyssey (XV, 84) the value of a tripod is equated with that of a golden cup or a pair of mules, in the Iliad (VIII, 290) even with that of a team of horses with a cart or a woman. Tripods are also often listed under hoped-for or actually presented gifts.

At sporting events tripods were often offered as prizes, for example from Achilles in the Iliad (XXIII, 264). But victories in the musical field were also rewarded with tripods. While originally the winners in these competitions were able to take their prizes home with them and use them as they saw fit, in later times the winning tripods were intended to remain in place as consecration gifts ( Herodotus I, 144). Particularly large anathemas required a supporting and elevating substructure. This explains the origin of the tripod statues, which, figuratively elaborated, increased the stability of the construction and enabled a central, middle support under the cauldron or the bowl. The tripod bases of these consecration gifts, which were publicly displayed - often by victorious choir rains - developed into tripod structures. A well-known example of this is the Lysicrates Monument .