The title of this article is ambiguous. Further meanings are listed under Magic lantern (disambiguation) .

The Laterna magica (Latin for “magic lantern”), also called Skioptikon , is a projection device that was widespread throughout Europe from the 17th to the 20th century and advanced to become a mass medium in the 19th century . It represented the technical and technical combination of known optical effects in a single instrument. The various forms of image projection of the Laterna magica are summarized under the term projection art.

The magic lantern is a projection device that works according to the reverse optical principle of the camera obscura : It is a box with an opening in which a light source is located - in the 17th century initially a simple candle , oil lamp or pitch torch , later a Lime light burner or an electric arc lamp . This light penetrates through the opening and out through a lens system on the front of the box. A concave mirror behind the light source increases the brightness of the emerging light beam. The lantern images are inserted into the image guide, which is attached between the box and the lens system, and projected with the light that falls out. Mechanisms for changing images and often also for image movements are integrated in the image guidance. Representative pictures, but also writing, play of colors or ornaments are thrown onto a projection surface (usually a canvas) in this way. The magic lantern is therefore the forerunner of modern slide projection and film projection . 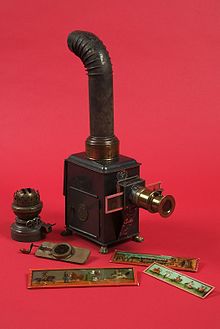 Another model permanently on display at The Children's Museum of Indianapolis

When the magic lantern came about is not clearly known. The silhouette projection by Johannes de Fontana (1420–1430, p. 70r) is considered to be the oldest representation of a projection of a picture carrier. However, this projection does not use a lens system and should have shown a rather blurred image. The invention is often awarded to the Dutch physicist Christiaan Huygens (1629–1695). It is unclear how seriously Huygens intended this. "Huygens is said to have refused [..] to build a" bagatelle "like the magic lantern for his father." A scientific magic lantern representation is in the work Ars magna lucis et umbrae ("The great art of light and shadow “) By the German Jesuit Athanasius Kircher from 1671. In the text next to the magic lantern, Kircher mentions a "Walgenstenius". Kircher was not - as widely assumed - the inventor of the magic lantern, but with his work he spread the knowledge about the basics of this projection device. Thomas Rasmusser Walgenstein , a Danish mathematician, made the Laterna magica famous on many trips through Europe and is considered to be the eponym.

In the early years of the magic lantern, the projection artists painted the lantern pictures or placed orders. They often used the illusion effect of light images in dark rooms to make them appear as reality. For this, the magic lantern was set up so that it was not visible to the audience. In the theater of Goethe's time, stage fog served as a projection surface so that, if the effect matched the scene, the impression of freely floating figures was created. With these representations of ghosts, so-called phantasmagoria , the magic lantern established itself as a professional entertainment medium outside the theater. The phantasmagoria had their heyday in the late 18th and early 19th centuries. Because of the effect of these projections, the magic lantern was also known under the name of the "terrifying lantern".

The subject of ghost appearances faded into the background in the 19th century, when stories, fairy tales and attractive visual effects increasingly dominated the presentations. Religious and scientific topics were also presented to the public.

In the course of the industrial revolution , the magic lantern developed into a mass medium in the 19th century. Lanterns and picture series were mass-produced cheaply, new forms of distribution and an extensive lending system led to the widespread use of industrial products. Companies offered projection equipment and image material in extensive catalogs. Due to the mass production, the magic lantern was now affordable for private use and became an entertainment medium for the family. There were even suitable devices for children, which could be purchased in a box and with several colorful glass pictures.

From the 1830s onwards, fog imaging devices made up of several projection units (mostly two or three-beam devices, some of which were also positioned next to each other) played a prominent role. They made it possible to cross-fade various images and fade-ins (to generate fog images ).

Due to the technical reproduction of the pictures, photographic processes quickly appeared alongside the painted pictures. The increasing qualitative deterioration of the mass-reproduced projection images as well as the performances triggered a public debate about the future of projection art in the 1890s. With the development and spread of the cinematograph at the end of the 19th century, the art of projection of the magic lantern lost its importance.

The audiovisual media of the 20th century ( film , slide projection ) developed experiences from the projection art of the magic lantern, for example in terms of image design and dramaturgy. The early film is now regarded as a late form of historical projection art.

The German Film Museum in Frankfurt am Main shows a collection of Laterna Magicas in its permanent exhibition.

Performance and areas of application

Demonstration with a magic lantern

Providers of the demonstrations were mainly wandering showmen who presented their magic lantern programs at fairs, fairs or in variety theaters . Magic lantern performances were also held in churches and inns. The demonstrations lasted up to two hours and were accompanied by music and a reciter or "lecturer" who commented on the images and involved the audience.

Industrial mass production favored the standardization of performances. The manufacturers delivered picture series with a ready-made text or comment, which was often adopted during the performances.

In addition to the broad field of entertainment, the magic lantern was also used on a large scale from the 19th century onwards for the purpose of popular education and education in order to provide information and instruction to the public in a wide variety of areas: “Object instruction in general and especially scientific and popular science Associations have long mastered this excellent means of instruction and with the greatest success ”. Representations dealt with geography , literature , theater , social, biblical and political topics. At the beginning of the 20th century, for example, the German and Austrian Alpine Association (DÖAV) had around 11,000 lantern pictures in its inventory. This was based on socio-educational, religious or political intentions of state or church institutions, social organizations such as the Temperenzverein , parties and other political groups. Particularly in the area of ​​social education, narrative and informative picture series were used in order to be as effective as possible. The popular education movements made a significant contribution to the development of projection art as a mass medium .

The images that are pushed into the lantern for projection were either painted (sometimes printed) or later photographs, which were mostly colored. The carrier medium for transparent colored surfaces and opaque contours is glass. Standardized image formats were only established in the 19th century in the course of industrial production. The formats of the glass projection images and the sizes of the devices sometimes differed considerably. Toy lanterns and pictures for private use were much smaller than projection devices for professional demonstrations. At the heyday of the magic lantern in the 19th century, different types of projection images were widespread, which could convey spatial-temporal processes to the viewer in different ways: through series of images, changes in the image itself with the help of movable masks or fades:

Wikiversity: The magic lantern in the theater of the Goethe era  - course materials