This article describes the optical device - for the Thrash Metal band see Zoetrope . 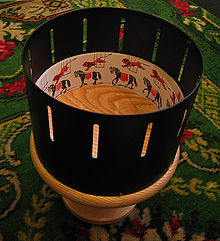 Replica of a Victorian zoetrope

The zoetrope or zootrope (also popularly known as the miracle drum ) is a simple optical device that mechanically generates moving images. It is one of the forerunners of cinematography .

The zoetrope consists of a dark rotating drum, open at the top, with narrow slits at the edge at regular intervals. On the inside wall of the drum is a strip of paper with drawn phases of movement or series of photographs , with as many pictures as the drum has slots. The drum is set in rotation and the viewer looks through the slits passing by at the paper strip. As with flip books , the stroboscopic movement is used to create the illusion of a continuous movement. This is based on the inertia of human vision, which means that the images recorded by the eye in rapid succession (more than 15 per second) are no longer individually resolved and perceived as continuous movement. The principle of operation corresponds to that of the film projector .

The zoetrope was invented in 1834 by William George Horner (1786-1837), an English mathematician, under the name Daedaleum or Daedatelum . The name refers to the recorded movement phases that the builder and sculptor Daidalos is said to have created as sculptures in Greek mythology . In the 1860s, the invention found its use - first in the United States - under the name Zoetrope or Wheel of life , including as a widely used toy. Further developments such as the Praxinoscope followed .

To this day, the Zoetrop is primarily known as a children's toy, not least because anyone can make it themselves with little effort. But the zoetrope also has a permanent place in the historical collections of film museums, as it shows the basic functionality of film in a simple way.