A candle is a light source made of wax , stearin , paraffin , tallow or whale rat with a wick in the middle that gives off light and warmth with an open flame.

In addition to being used as a source of light and heat, candles are also used to a much lesser extent as timepieces ( candle clocks ) and controversial remedies ( ear candles ).

The origin of the word for candle in the meaning "tallow, wax light", from Old High German kerza (8th century) or karz (9th century), Middle High German kerze , kirze for "tow, tinder, wick, light, candle", Middle Low German kerte , kerse is unclear. On the part of etymological research, a historical borrowing via charza from the Latin charter for "papyrus sheet , writing material, document" is being considered. This hypothesis is supported by the fact that candles were long made from wrapped birch bark soaked in oil. Since birch bark was also used as writing material, a connection between papyrus and candle for Latin charter seems possible. On the other hand, a borrowing from Latin [ candēla ] cērāta "wax light" (from Latin cērāre "to cover with wax") is to be assumed. 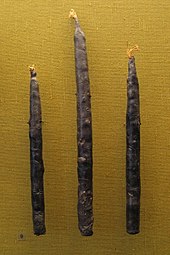 With stone lampshells in which a wick burned in liquid sebum or oil, the Cro-Magnon people probably defied the darkness around 40,000 years ago.

It is estimated that the invention of the candle itself dates back at least 5,000 years. It is known that candles were already being used in the Middle East at this time. They were created by dipping a funale (wick) made of rush, straw, hemp, papyrus or reed in tallow and soaking it.

Historians found evidence that many other earlier civilizations developed candles with wicks using waxes from available plants and insects. Early Chinese candles were apparently made by pouring them into paper tubes, using wicks made from rolled rice paper and a combination of waxes from native insects and seeds. In Japan candles were made from the wax of tree nuts, while in India candle wax was made by boiling the fruits of the cinnamon tree. As a special form came from the end of the 3rd century BC. Chr. Wax torches on. In ancient Greece in the 6th century BC In BC, wood and pine in bowls were soaked with oil and fat, in Egypt castor oil was used for this at that time .

In general, the further development of the previously simple candles is attributed to the ancient Romans, who repeatedly dipped rolled papyrus in liquid sebum or, from the 2nd century onwards, liquid beeswax. In the 1st / 2nd In the century AD, the candle is described as a short-lived light that has a thread (wick) and must be constantly maintained. These small tallow or wax torches were attached to the tips of a candelabra as lighting fixtures. The Romans have been using low tallow, pitch and wax candles since the 2nd century AD . They used the candles made in this way to accompany travelers at night and for religious ceremonies. Around the middle of the 2nd century AD, the Romans had developed low wax candles to such an extent that they could burn in a closed room without the annoying, excessive soot and bad smell, which was inevitable with torches.

Above all, the needs of the church and the stipulation that only beeswax could be used as candle raw material for these candles led to beeswax becoming an important commodity in the Middle Ages. A guild of light pullers has been known from France since 1061, and in the 14th century a guild of candle makers in Hamburg. Two candle trading companies had existed in London since the late Middle Ages, that of the wax candle merchants and that of the tallow candle merchants . Multi-wick candles twisted together like a rope, which burned down like a torch, were referred to with the German word " Tortsche " in the early modern times .

Outside the churches and aristocratic houses, pine shavings or candles made from the cheaper tallow were used, so-called “Unschlittkerzen”, also known as “ rush lights ” in north-western Europe . The fat required to make the Unschlittkerzen was obtained from beef fat tissue or mutton tallow and was not purified. Accordingly, unschlittkerzen smelled and sooted strongly. With all candles made from these fuels, the wick had to be regularly "blown" or "cleaned" (that is, shortened) in order to avoid soot and dripping. Tallow candles were whitened with arsenic in the 17th century .

It was not until 1725 that the Walrat, an inherently white basic candle material, was used primarily for luxury candles. Henri Braconnot and François Simonin generated 1818 and Claude-Anthelme Manjot 1820 first stearin .

In 1823, Eugène Chevreul , the founder of oleochemistry , applied for a patent for non-drip candles and founded a candle manufacture together with Joseph Louis Gay-Lussac in 1824. From 1831 De Milly introduced a series of improvements, such as soaking the wicks with salt solutions, avoiding the crystallization of stearic acid, and pressing and pouring the candles (Milly candles). Shortly after the invention of paraffin , candles (Belmontin candles) were made by Seligue in Paris and by Young in Manchester (England) after initial attempts in 1839.

At present, candles often consist of around two thirds of paraffin and one third of stearin, high-melting hardening additives in small amounts, opacifiers (alcohols, acetone) and possibly color pigments, the wick is spun from cotton. While candles were drawn up to the 19th century, today they are mostly poured in candle molding machines or produced by pressing. Winding is only used for high-quality beeswax candles, possibly also kneading the beeswax. At the end of the 20th century, a separate branch of handicraft developed around candles and their shapes and colors.

Lighting a candle is significant in the beliefs of many cultures. A burning candle symbolizes the soul that shines in the dark realm of death. The altar candles and the Easter candle symbolize the resurrection in Christianity, that is, Jesus' triumph over death, or Jesus Christ , who came into the world as light and illuminates the darkness. The Easter candle is a symbol of the body of Christ. Grave lights are placed on graves in memory of the deceased, especially at All Souls Day . Candles also serve as votive lights .

An absorbent wick , usually made of braided cotton threads , is surrounded by wax or a similar fuel that melts at a low temperature (around 60 ° C is typical). After lighting the wick, the wax melts. By the capillary action of the wick wax is transported in the flame, where it evaporates, and then in the presence of oxygen to burn . The convection , i.e. the rising of the warm combustion gases, supplies the flame with unused air and gives the candle flame its characteristic elongated shape. The candle goes out when the oxygen level drops to around 10–14%.

If the wick becomes too long, the candle will begin to soot. One reason is the incomplete combustion of the wax vapor and the preservation of the wick due to non-volatile components in the wax. Modern candles therefore contain appropriately adapted wax mixtures (for example in a ratio of 80% paraffin to 20% stearin ) and an asymmetrically braided wick with tension threads. As a result, it leans to one side when burning and emerges from the flame. Here it comes into contact with oxygen and can burn up (see glowing wick tip in the picture). In the past, the wick had to be shortened (“blown”) regularly to avoid soot. There are special wick scissors for cutting off the so-called snuff .

Candles are usually lit by an open flame (match, lighter, other burning candle). The candle can be extinguished with a candle extinguisher , wick scissors, wide copper tweezers or simply by blowing it out. After being blown out, aerosols are produced by the post-evaporation of the fuel , which are of little health concern.

Origin of the flame 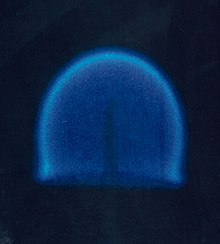 The combustion zones of a candle flame are shown in the illustration on the right. The hottest areas are outside the glowing yellow flame and do not contribute to the generation of light. The explanation for this is provided by Kirchhoff's law of radiation , which establishes a connection between radiation emission and absorption by a body: Oxygen and other gases involved are transparent, which is why they do not emit light even at temperatures of 1400 ° C. However, the black soot particles in the flame glow intensely ( black body ) and emit a continuous spectrum according to their temperature. Corresponding to its temperature, the radiation maximum of a candle is around 2 µm in wavelength, so that only a weak extension of Planck's radiation curve is visible, which has a high red-yellow component.

In zone 1 , the wax is evaporated and only partially burned because oxygen does not diffuse into it from the outside quickly enough . The temperature here is around 600 to 800 ° C and increases to 1000 ° C in zone 2 . The bluish color is caused by the transfer of radiation from excited molecules in the combustion gases. In zone 3 (annealing zone), the wax , which mainly consists of hydrocarbon chains , is broken down by the combustion process. This converts the carbon of the hydrocarbon chains into carbon dioxide and the hydrogen into water vapor. Due to an incomplete combustion process, carbon is deposited into soot particles that glow at 1200 ° C and thus produce the bright glow. The zone 4, the flame surface, is the most active zone of the candle. The combustible components from the wax find enough oxygen for complete combustion and generate temperatures of up to 1400 ° C.

If you blow out a candle, wax fumes rise. They can be ignited and can make the candle burn again. This is known as smoke ignition .

In weightlessness a candle burning with a spherical flame. The combustion rate is low because the oxygen can only reach the flame zone via diffusion. No soot is formed, but the bluish light of the excited combustion gases can be observed.

Beeswax was used as fuel in the past, today mostly stearin or paraffin or a mixture of these with a melting point of around 60 ° C.

Ozokerite , a mined mineral from the order of the resins, was used for the manufacture of candles on the Vltava River even before the discovery of paraffin. The pale yellow ceresin is obtained by adding 6 to 10% sulfuric acid (which does not remain in the product) . 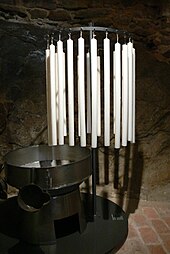 Candles are made by kneading, drawing, pressing, pouring or winding.

The candle business is highly seasonal. Around 35 percent of candle purchases are made during the Christmas season ; There is also a great need at Easter . Since production in many companies takes place all year round, precise production planning and extensive storage are necessary, which puts a strain on the liquidity of the manufacturing companies. The production methods are not subject to any significant technological progress, so that regular new investments in machines are not necessary. The high acquisition costs of the sometimes very large machines represent a significant market entry barrier. Because of the poor order situation, some well-known companies in the industry had to file for bankruptcy.

In 2006 more than 40 manufacturers in Germany produced over 100,000 tons of candles. An almost as high and steadily increasing volume is imported from the Asian region. In order to counteract these imports and to support the European candle industry, the EU introduced an unlimited anti-dumping tariff for candles from some manufacturers from China in mid-May 2009 , after a preliminary decision in 2008.

Original candles for decoration and for special occasions

For decorative purposes and special occasions, there are unusual and original candles, for example in the shape of animals and plants and also with lettering.