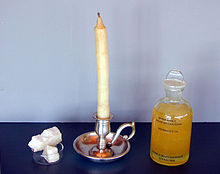 Right: Bottle with Spermaceti. Left: a candle and pieces of whale rat 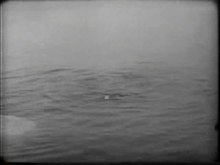 Play media file
A sperm whale is hunted, its spermaceti skimmed off, its blubber cut off and boiled. From the film: Down to the Sea in Ships (1922)

The whale rat (also Spermazeti or Spermaceti , White Amber , Cetaceum ) is a fat and waxy substance from the melon in the head of sperm whales . Because of its diverse uses, sperm whales have become a preferred object of industrial whaling .

Originally, it was assumed that Spermaceti was the sperm of the sperm whale. Ceti means sea ​​monster or whale in Latin , literally translated Spermaceti means whale sperm. To this day the sperm whale is called Sperm whale in English . Hence the German name spermaceti is because the substance as a medicine was ( "Seeing then that helps it soon and counsel does in a number of disability", Adam Lonicer ). Whale rat is not to be confused with ambergris .

Section through the head of a sperm whale, spermaceti organ and junk melon marked in gold

Spermaceti is found in the so-called Spermaceti organ and the junk melon of the sperm whale ( Physeter macrocephalus also Kaschelott , Cachelot ), which in principle represent an oversized melon. This white, soft, spongy tissue is located over the jawbone and is saturated with spermaceti . If you stab a live or still warm sperm whale in the forehead, spermaceti will flow out of the wound. Since different components are distributed differently in the organ, it serves as a kind of "acoustic lens" for echolocation . The thesis that it increases the density by solidifying at low temperatures and thus reduces the buoyancy of a diving sperm whale, is considered to be refuted by measurements on diving animals.

At the end of the Second World War , the numbers of still hunted whales (mostly baleen whales ) were so reduced that the hunt for sperm whales was resumed - at the same time the industry discovered new areas of application for whale oil and whale rat. The new hunt reached its peak in 1964, when 29,255 specimens were shot and brought in around 81,000 t of spermaceti . The United States banned imports of whale products in late 1970. England banned the import of whale products in 1973 with the exception of whale oil and whale rat. The hunt ended worldwide in 1984 with the general ban on whaling by the International Whaling Commission .

At body temperature, the spermaceti is a liquid, dark-yellow, clear substance. When it cools, a solid mass of brown raw whale and thin, odorless, light yellow whale oil (Kaschelottöl, Cachelotöl; English sperm oil ) separates from this. If raw whale is cleaned with caustic soda , it is a whitish, almost odorless and tasteless, slightly brittle, coarse-leaved, waxy mass (whale; English spermaceti wax ). Its melting point is around 45 ° C. Raw Spermaceti provides about 11% whale rat. Whale oil can be converted into so-called “synthetic whale oil” by hydrogenation .

From a chemical point of view, Walrat is a mixture of triglycerides , various diacylglyceryl ethers (approx. 2%) and waxes. The waxes are long-chain monohydric alcohols esterified with a fatty acid, primarily cetyl alcohol (C 16 H 33 OH) and oleyl alcohol (C 18 H 35 OH). This was cetyl palmitate won.

The composition of the sperm whale spermaceti differs markedly from the fat mixtures in the melons of other whales. While waxes only make up a small proportion of the mixture in most whales, their proportion in the sperm whale ranges from 38% to 98%, depending on age and sex. A similar value is only achieved for dwarf sperm whales (Kogiidae), Amazon river dolphins (Iniidae) and ganges dolphins (Platanistidae). Isovaleric acid is missing in the triglycerides and waxes of the sperm whale spermaceti  - otherwise only the fats of the Amazon dolphin ( Inia geoffrensis ) show this feature . The waxes of these two species also contain predominantly long-chain (C 10 -C 22 ) fatty acids, while shorter-chain fatty acids are more common in other whales.

Spermaceti was stored and processed separately from the bubbler . Blubber was used to produce oil for fuel and lamps.

Whale oil is bottled in a whale oil refinery. USA 1902.

Whale oil was especially used as a fuel in oil lamps (especially in lighthouses, street lamps) because it burned brighter and cleaner than any other oil available and did not give off a bad odor. It was replaced by cheaper, more efficient paraffin oil at the end of the 19th century . Whale oil was a popular lubricant for fine, light machines such as sewing machines and watches. It was also used to protect metals from rust because it would not dry out or become rubbery and would not attack the metal. It was later used primarily as a high-pressure lubricant because of its high temperature resistance , but was also a component of hydraulic fluids , inks and as an impregnation agent. Because of its properties, whale oil has been widely used in the aerospace industry. It was also often used sulfonated .

It could be stored for a long time, but had the disadvantage that it stank very much in its raw state, so it had to be stored separately. The oil (wax) from the seeds of jojoba ( Simmondsia chinensis ) is used today as a substitute for whale oil , as it has very similar properties.

Walrat was used to make fine candles ; these shone brighter than beeswax candles and burned cleanly, but smelled strongly of sebum . A light intensity unit, the Berlin light unit , which was outdated today and was used in the past , was defined by a Walrat candle with specified properties . Pure whale rat is very brittle and cannot be used alone for candles, but is mixed with beeswax, sebum and stearic acid . It was also used in cosmetics, for example in a cold cream formulation around 1890 , in finishes for textiles and leather and as a softener . It was also used to cover dried flowers .

With the appearance of the eighth edition of the German Pharmacopoeia in 1978, the use of whale rat in pharmaceutical preparations (e.g. in cooling ointment ) was replaced by artificially produced cetyl palmitate or cetyl stearyl alcohol .