This article deals with the fertilization fluid; for semen ceti see Walrat .

Sperm ( ancient Greek σπέρμα spérma , German 'descendant, descent, sex, stem, descendant, son, scion, basic material, germ, seed, seed, seed, seed' ) is the fertilization fluid of male (in hypotheses of antiquity and the Middle Ages also as the procreation contribution of female) animals and humans . The sperm of humans and mammals consists largely of the secretion fluid formed in the vesicle and other accessory sex glands . This contains the sperm formed in the testes that have passed through the vas deferens into the prostate . It also contains epithelial cells of the testicular tubules . The carrier liquid is known as seminal plasma or seminal plasma .

In male orgasms, semen is expelled through the penis ( ejakularche ) around the middle of puberty , after the testes have started to produce sperm ( sperm arche ). During vaginal intercourse , the contact of sperm with an egg can lead to fertilization .

In many worms, arthropods, molluscs and also in some amphibians (newts), spermatophores (packets of semen) are used for sperm transfer instead of liquid sperm; many aquatic animals release the sperm directly into the water.

The medical examination of the semen is sperm called. 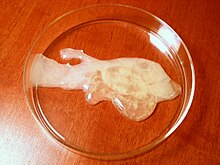 Human sperm in a petri dish

The fresh ejaculate of a physically healthy, sexually mature man is milky-cloudy, slightly shiny and interspersed with glassy, ​​sticky threads. It is weakly basic with a pH between 7 and 7.8 , which protects the spermatozoa from the acidic vaginal environment . Occasionally, for example after a long period of abstinence , there are yellow pigments , so-called flavins, in the semen, which can make them appear slightly yellow.

The sperm in the ejaculate usually gives the human sperm a characteristic smell and taste, such as that of white musk or chestnut blossoms , which, however , can be more or less clearly changed by certain aromatic foods or drinks. For example, the spices cinnamon , cardamom and peppermint are suitable , with fruit especially pineapple . Names such as Siebtrunk and white men's gold refer to the positive change in taste. Garlic and onions , broccoli and asparagus cause the opposite effect in taste .

When exposed to ultraviolet radiation ( Wood lamp ), semen glows bluish. Washing does not remove the fluorescent properties of tissue “contaminated” with semen , which is important for forensic medicine . However, this detection method has only limited reliability due to some significant limitations and shortcomings.

Sperm in liquid seminal plasma outside the body can survive for up to twelve hours; However, if sperm gets on a towel, cellulose or the like and dries in the air, it only has a survival period of a few minutes. Within the female body, in the vagina, sperm can survive for up to five days, depending on the current phase of the woman's cycle. During this time they are theoretically capable of fertilization. There is some evidence that components of the seminal fluid stimulate the production of cytokines in the uterus . These promote the implantation of the fertilized egg cell in the uterine lining.

Sperm consists of cellular components, the mature sperm (or spermatozoa , also called seminal filaments ) and the secretion of the accessory sex glands , the seminal plasma (or seminal plasma ).

On average, the volume of a human ejaculation is 2 to 6 ml, with 1 ml containing an average of 20 to 150 million sperm (compare with the stallion 200-300 million). That is 0.5% of the total ejaculate - the rest is seminal fluid. Around every sixth Swiss man between 18 and 22 years of age examined contains less than 15 million sperm per milliliter of ejaculate. The sperm quality in industrialized countries has been declining worldwide for years.

The seminal fluid is usually slightly salty and protein-rich (through the sperm) and contains dopamine , noradrenaline , tyrosine , the binding hormones oxytocin and vasopressin as well as various estrogens , pheromones (odorous substances), β-endorphin and the main component water .

Genital organs of the man

In the testes and epididymis, which only contribute 3–5% of the total volume of an effusion, testosterone , which regulates the production of the sperm cells, and a fluid that helps to mature and immobilize the sperm cells are produced in addition to the sperm .

The seminal vesicles are paired glands that consist of a tortuous tube. The inner wall of this tube consists of secretory epithelium . The secretion of the seminal vesicles makes up most of the volume, approx. 50–70%, of the ejaculate. It is used to liquefy the ejaculate and contains fructose ( fruit sugar ) and other substances that nourish the sperm cells, as well as large amounts of prostaglandins and fibrinogen . Semenogelin gives the fresh ejaculate a gel-like consistency, the prostaglandins contribute to fertilization by making the uterine lining more receptive to the fertilized egg, and possibly by stimulating the smooth muscles in the uterine wall to peristaltic movements that bring the sperm towards the ovaries . They also prevent infections in the male genital tract.

In the case of effusion, the prostate (prostate gland) contributes 10–33% in the form of a thin, milky liquid. The capsule of the prostate, like the seminal vesicle, contracts during ejaculation, so that the fluid from the two organs is mixed and expelled. The secretion of the prostate contains ions ( sodium , potassium , zinc and magnesium , calcium , citrate ions , phosphate ions ), a coagulation enzyme and profibrinolysin . The pH value is slightly acidic (pH 6.4). This is particularly important as sperm cells only become optimally mobile at a pH value of 6.0 to 6.5. Furthermore, PSA (prostate specific antigen) contain, to make movable about the sperm. The prostate also releases white blood cells , various granulocytes, into the seminal plasma, usually 1 (max. 2) million per 1 ml. Hence the infectiousness of the sperm (for example HIV ). The characteristic smell of semen is the provided equally by the prostate spermine causes.

In advance, triggered by the excitement, the parasympathetic nervous system innervates the Cowper's glands and stimulates them to secrete a relatively small proportion of 2–5% clear mucus ( pre-ejaculate ). In addition to the lubricant effect, the slimy secretion presumably serves primarily to neutralize urine residues and possibly also the acidic vaginal environment.

Semen under ultraviolet radiation (above) and normal lighting (below)

During erection of the penis already in infant occur, the production of sperm begins usually only during puberty . Sperm is also produced without (manual) stimulation, e.g. B. emitted during pollutions in sleep ; in the process, the body gets rid of the sperm that have matured for more than ten days and have not been eliminated by the body's own degradation mechanisms.

In forensic medicine , the detection of sperm plays a role in solving sexual crimes. Even a single sperm can be identified with the Hy liter . With molecular biological methods to create a is genetic fingerprinting possible that - except in identical twins  allows an unambiguous identification of a person -.

Sperm (including dried ones ) fluoresces when exposed to ultraviolet radiation (see picture), which can be used for criminal investigations.

Sperm can also contain pathogens such as the HI or hepatitis B virus; the diseases in question are therefore sexually transmitted .

Proteins contained in semen can cause allergic reactions, but semen allergies are very rare. The symptoms are similar to those of a pollen allergy ( hay fever ). Self-allergy ( autoimmune reaction) is also possible - men occasionally have an allergic reaction to their own sperm, which was first described in 2002 as Post Orgasmic Illness Syndrome (POIS).

Haem (at) ospermia is the appearance of blood in semen. This occurs with acute or chronic seminal vesicle inflammation , tuberculosis , constipation , inflammation or injuries.