Testosterone is a sex hormone ( androgen ) that occurs in both sexes, but differs in concentration and mode of action in men and women. As the backbone of the testosterone is composed of all androgens androstane (19  C - atoms ). The precursors of testosterone are the gestagens (21 carbon atoms) or dehydroepiandrosterones (DHEA) . Testosterone is an artificial word derived from testis ( testicles ) and steroid .

In 1930, Adolf Butenandt tried to isolate male sex hormones from bull testicle extracts and later from male urine, which he and Kurt Tscherning succeeded in doing for androsterone in 1931. Based on his analyzes, Butenandt already suspected the correct structural formula for testosterone, whose partial synthesis from cholesterol succeeded Leopold Ružička in Zurich in 1934 . It was discovered and named testosterone for the first time in 1935 by Ernst Laqueur , who isolated this steroid hormone from bull testicles .

In men, testosterone is mostly produced under the influence of LH ( luteinizing hormone ) in the Leydig cells in the testes. The adrenal cortex produces small amounts of other androgens, but only a very small amount of testosterone.

In women, the ovaries and adrenal cortex produce small amounts of testosterone. In the biosynthesis of the organism , cholesterol is the precursor or progesterone is an intermediate product for testosterone synthesis .

Testosterone has different effects on various organs. It causes z. B. as a "male sex hormone " the development of the male phenotype , is responsible for growth (especially the build-up of muscle mass and fat stores ) and ensures sperm production .

Testosterone is bound to a protein and transported via the blood to many other target organs that have receptors for this hormone. The transport protein is called sex hormone-binding globulin (SHBG).

In the body part is of testosterone in the target cells by the enzyme steroid 5- α -reductase (SRD5) to the biologically more active dihydrotestosterone (DHT) metabolized .

A negative biological feedback (Feedback) testosterone inhibits the pituitary gland , the secretion of luteinizing hormone (LH) and in the hypothalamus that of Gonadoliberins which also gonadotropin-releasing hormone is called, (GnRH).

Testosterone is transported to the seminiferous tubules via the androgen binding protein (ABP) of the Sertoli cells . Here it causes the spermatids to mature into sperm (see also testicular function ). In addition, testosterone causes the development of the penis , scrotum , accessory sex glands and secondary sexual characteristics in male individuals during puberty and ensures that these characteristics are maintained in adults.

Outside of the sexual organs, the hormone promotes the growth of body hair and whiskers (but not the scalp hair ; see also hair loss ) and has an anabolic , i.e. muscle-building, effect. Furthermore, testosterone strengthens the formation of new cartilage and bone, similar to thyroxine . A high testosterone level promotes the development or increase of sexual desire ( libido ) and in general drive, perseverance and "lust for life" as well as dominant and aggressive behavior. Finally, the action of testosterone leads to an increase in red blood cells ( erythrocytes ) by stimulating the release of erythropoietin in the kidney and activating the bone marrow .

Artificial testosterone supply in women can lead to masculinization (voice, muscles, facial features, hair) and enlargement of the clitoris , which often no longer regresses completely after discontinuation (depending on the duration, level of the dose and individual disposition).

The behavioral biological effects in animals were researched and observed in the form of imposing behavior , fighting behavior , courtship and the urge to mate. This was u. a. by castration (removal of gonads) and subsequent hormone supply to animals (aggressive stallions become gentle, adapted geldings ).

A study showed that testosterone in women led the test participants to make fairer offers in a negotiation experiment. The researchers explain this effect by the fact that the hormone increases the sensitivity for the status, and assumed that in the socially complex human environment it is not aggression but rather pro-social behavior that secures status. In middle-aged women, elevated testosterone levels are associated with a higher risk of depression. 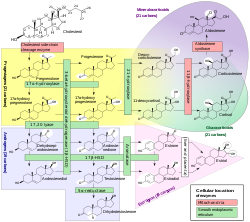 The starting material for testosterone biosynthesis in the Leydig cells is cholesterol (cholesterol), which can be processed in two different ways. The last step, the reduction of androstenedione , is catalyzed by the enzyme testosterone-17β-dehydrogenase .

In animals in which multiple births are the rule, including most mammals, the adult testosterone level is largely dependent on the position of the fetus in the uterus. Fetuses lying in the uterus between two females later have a lower testosterone concentration than those lying between two male siblings. As a result, adult animals show very different behavioral patterns.

The testosterone level in the blood serum of a healthy man is subject to daily fluctuations and follows a circadian rhythm , with the value going through a maximum early in the morning and a minimum in the afternoon. Depending on age, the morning concentration of total testosterone in boys fluctuates between 1 and 4 nmol / l before puberty and between 13 and 23 nmol / l after reaching sexual maturity with a mean value of around 16 for older men and around 18 for younger men . The normal range for all men is between 12 and 40 nmol / l (12 and 30 nmol / l). Testosterone levels in women vary with the phase of the menstrual cycle and body mass index , making it difficult to establish normal ranges. In general, however, the normal range is between 0.4 and 2.0 nmol / L (12–58 ng / dL).

There is obviously a correlation between sleep time and testosterone levels. In a study carried out with 800 healthy men of all ages, the testosterone level first rose with increasing average sleep duration (measured over three weeks), reached a peak after about eight hours and, surprisingly, fell sharply again immediately afterwards. While the increase is explained by an increased hormone production, which mainly takes place during sleep, the decrease is still unexplained.

The testosterone level decreases continuously with increasing age. This alone has initially no disease value. Treatment is only indicated if there are additional symptoms of testosterone deficiency ( hypogonadism ). If hypogonadism is present, substitution therapy may be indicated even at higher levels.

The testosterone level is mainly determined from the blood serum. Due to the daily fluctuations in the testosterone level, the blood sample takes place in the morning hours. The determination is usually carried out using an immunoassay method. Since this provides inaccurate results with low testosterone levels, a combination of extraction, chromatographic methods and subsequent immunoassay or mass spectrometric determination is recommended in such a case . Liquid chromatography with mass spectrometry coupling enables the measurement of different steroids in the same sample.

The hormone dihydrotestosterone (DHT) is the active form of testosterone. In the case of hereditary hair loss, there can be an inherited hypersensitivity of the hair roots to DHT and lead to a progressive reduction in the size of the hair roots. One treatment option is medication to lower DHT levels.

The following options are available as replacement therapy:

With trans identity , trans men can choose to take testosterone. This leads to a general masculinization with corresponding facial and body hair, change in fat distribution, muscle building and a noticeable change in the pitch of the voice.

Testosterone as a doping agent

Some bodybuilders and endurance athletes use testosterone as a doping agent to accelerate their muscle building or to overcome natural performance limits. However, there is a risk of using an excessive dose, which can lead to serious, possibly permanent, urological problems. Synthetic testosterones in the form of short-chain (propionate), medium-chain (enanthate / cypionate) and long-chain esters (undecanoate, bucciclate) are common, the majority of which are obtained on the black market. With these products, there is a risk of contamination, incorrect dosages and liver damage, among other things.

Possible side effects, especially when consuming synthetic testosterones and using high doses, are: