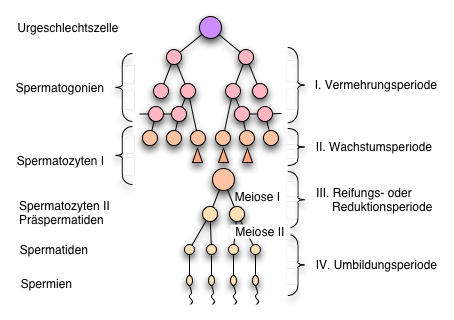 The spermatogenesis ( ancient Greek σπέρμα sperm "seed", γένεσις génesis "Arise, Will") is the formation of sperm , that male germ cells.

In the following, spermatogenesis in humans, i.e. in men, is discussed. Both prenatally and during puberty, spermatogonia form from the stem cells in the testes (the so-called stem spermatogonia). After puberty , spermatogonia can differentiate into first-order spermatocytes (cell enlargement). Before that, however, they divide mitotically , so that (in contrast to oogenesis ) the number of germ cells in the organism is regenerated throughout its life ( spermatocytogenesis ). Spermatogenesis can thus be divided into three stages: mitotic reproduction, meiotic maturation and finally differentiation or spermiogenesis .

B spermatogonia are connected by cytoplasmic processes and thus form groups that go through the following stages together and simultaneously.

In spermiogenesis, the spermatids mature into sperm. This leads to nuclear condensation, a loss of cell plasma and the formation of a kinocilium (a tail). In addition, the acrosome , which is later used to penetrate the egg cell, originates from the Golgi region. From a single, diploid spermatogonium, four haploid sperms arise through meiosis, two of which have an X chromosome and two have a Y chromosome .

The pituitary LH ( luteinizing hormone ) controls testosterone production through a negative feedback mechanism involving the hypothalamus . The testosterone that is formed is transported into all tissues via the blood and lymph, but acts primarily in the brain and genital organs. There the testosterone has to pass the blood-testicular barrier , as it is crucial for spermatogenesis. This is made possible by the also pituitary FSH : The FSH promotes the construction of testosterone-binding proteins in the Sertoli cells , which it transports through the blood-testicular barrier.

Also important for spermatogenesis are the Leydig intermediate cells , which go through two flowering stages: during the embryonic development of the testes and LH -induced during puberty. You can now produce testosterone.

The female counterpart to spermatogenesis is oogenesis . Compared to oogenesis, hydromobile compact cells are formed in spermatogenesis, which are able to actively fertilize an egg cell. In spermatogenesis four sperm are created, where the analogous steps of oogenesis only produce one egg cell . While the cytoplasm with the mitochondria is largely removed during spermiogenesis , both are retained in the oocytes. Also in men there are no pronounced cycles of hormone regulation that control oogenesis in women.