This article describes the body fat of ruminants. For viscous skin fat, also known as sebum, see sebum gland . Both are not to be confused with the mineral talc .

The fat around a calf's kidney 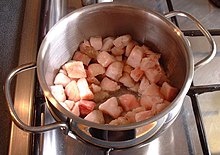 Melting the fat in the saucepan

Ready-made beef tallow in a glass

General chemical structure of the triglycerides of sebum. R 1 , R 2 and R 3 therein are alkyl radicals or alkenyl radicals with a mostly odd number of carbon atoms. Tallow is like other fats and oils a mixture of different tri esters of glycerol .

Tallow ( latin sebum ; also unsolved , and medium high German unslit : tallow , Island t , Unselt , Inschelt ) or visceral fat is from slaughtered ruminants obtained (and other cloven-hoofed animals) of solid fat . It is a yellowish-white mass of higher consistency and viscosity than the semi-solid, greasy fats, which mainly contains triglycerides with saturated fatty acid residues with an even number of carbon atoms. However, there are also esterified fatty acids with an odd carbon number such as pentadecanoic acid (C15) and margaric acid (C17) in the triglycerides.

Beef suet, which covers almost all of the sebum requirement, is of greatest economic importance. Smaller amounts of other types of tallow such as mutton tallow or deer tallow can, however, also be used.

Because of its high melting point and recently also because of its cholesterol content , tallow is rarely used for food purposes. The recovered from adipose tissue around the kidneys of cattle and sheep suet ( English suet is) but uses suitable for cooking and baking and is regarded in the British and American cuisine. In Belgium , French fries are traditionally fried in beef kidney fat. Fine tallow is carefully melted and purified from fresh raw materials and is also available in stores under the name Premier Jus . The margarine , which was originally obtained mainly from tallow, is now mostly made from vegetable oils. Tallow is also used as bird food (for example in tit balls ).

Soaps, lipsticks, shampoos, shaving creams and other cosmetics are made using sebum. Deer tallow is used as a cream that prevents skin areas from becoming sore. Oil paper , pastel pencils and erasers are kept supple by sebum. For candle production , in addition to traditional beeswax , fatty acids ( stearin ) obtained from vegetable fats and tallow are used, but today candles are mostly made from the cheaper paraffin on a petroleum basis .

One of the most important uses is the production of oleic acid for oleochemistry from tallow via hydrolysis and subsequent crystallization . This process can produce concentrations of around 70%, known as olein. Oleic acid occurs as a component of the corresponding triglycerides in almost all natural (vegetable and animal) oils and fats, beef tallow has a share of 26–45% and mutton tallow even 31–56%. In addition to oleic acid, palmitoleic acid , linoleic acid and other unsaturated and saturated fatty acids can be contained in this mixture . Tallow can also be used as a raw material for the production of biodiesel through transesterification , but is only used very rarely.

Other uses of tallow in the industrial sector are uses as a lubricant in general locksmith work , assembly , thread cutting and other work. Screws that were lubricated and preserved with island during assembly under water can usually be loosened without any problems even after decades. Water turbine parts were / are coated with heated sebum (unschlitt) for sealing purposes and to prevent corrosion. In the 19th century, a mixture of beeswax and slurry was used to seal and preserve rifle cartridges (grease dipping).

The notches in the saddle of stringed instruments are often smeared with sebum by their users in order to allow the strings to slide easily in the bridge. This applies to both classical instruments and modern electric guitars and basses. Some musicians also grease their fingertips with sebum for playing by plucking and striking the strings of their instruments. This is gentle on the fingertips and allows easier play. Tallow was even used as a material in the fine arts in the 20th century, most prominently in the work of Joseph Beuys , whose Fettecke became an icon of modern art.

Historical use of sebum

Even in early cultures, tallow was used to make soaps and (preferably bull tallow) ointments . Until the early modern era, unschlitt was obtained mainly from billy goats, sheep and deer, as well as from bulls and calves. In seafaring, tallow was essential for keeping the rigging supple ; the riggers always carried him with them in a split horn . Tallow has also been used for centuries for shoe wax , for sealing wooden barrels and as a lubricant (for carriages and other equipment).

Tallow has been used by miners as fuel for their mining lamps since the Middle Ages . Uncleaned beef suet , so-called Unschlitt , was used for Unschlitt candles or Unschlitt lamps like oil lamps in everyday life, for example it lit the light rooms . Also in the world wars used in trenches and in bombing raids Hindenburg light was a Talglampe.

In the 19th century, due to the increasing importance of hygiene products and the expansion of the production of stearin candles, tallow processing became an industrial trade in which tallow was traded worldwide.

Up until the 19th century, sometimes until the 20th century, tallow was handcrafted from slaughterhouse waste in small businesses. To melt the tallow out, the ground raw mass was heated with water, sometimes with the addition of a little sulfuric acid over a fire or with the introduction of steam .

From the 19th century onwards, only double-walled, closed-top boilers were used industrially, from which the foul-smelling vapors were led into a tall chimney or into the furnace. The melted fat separated from the greaves was already a commodity in itself (raw tallow), but it was not pure enough for the manufacture of candles and soaps, but was subjected to a further refining process (refined tallow).

Most of the tallow obtained in Germany went from the butchers and slaughterhouses directly to the soap makers . High quality imported goods came from Poland, Holland, Denmark and Russia. Most of the merchandise came from Russia, with the calf tallow being imported more from the south from the Black Sea and the beef tallow mainly from the inner and northern provinces of Arkhangelsk and Siberia via Petersburg and other western ports. At the end of the 19th century, wooden barrels were typically used for packaging; the white tallow had the peculiar shape of a truncated cone with bottom surfaces 75 and 45 cm in diameter. The often common storage of the barrels on the open deck without protection from the sun was a disadvantage for the durability. There were special department stores in Petersburg for shipments coming from the interior of Russia, in which experts checked, sorted and stamped the goods. Most of the great sebum production in Australia and Argentina went to England.

White mutton tallow could be distinguished from yellow beef tallow by color. Mutton tallow is a bit harder and more brittle, but turns yellow and rancid more easily than the soft and slippery beef tallow.

It was more important to distinguish between light tallow and soap tallow:

The value of the sebum was measured according to the freezing point of the fatty acids (the so-called sebum titer).

In addition to making candles and soaps, tallow was widely used in leather processing and as a lubricant. However, the sebum used by pharmacists to make plasters and ointments was not taken from the trade, but melted from fresh raw material.

The history section is based on a text from Merck's dictionary of goods :