A black body (also: black body , Planck radiator , ideal black body ) is an idealized thermal radiation source . The idealization is that such a body completely absorbs all incident electromagnetic radiation of any wavelength , while real bodies always reflect part of it. At the same time, it emits electromagnetic radiation as thermal radiation, the intensity and spectral distribution of which are independent of the further nature of the body and its surface and only depend on its temperature.

The black body serves as a basis for theoretical considerations and as a reference for practical investigations into electromagnetic radiation. The term "black body" was coined in 1860 by Gustav Robert Kirchhoff .

Spectral distribution of the intensity of black body radiation 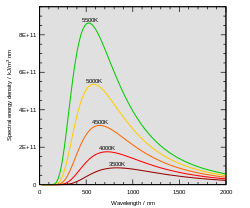 Different temperatures of the black body 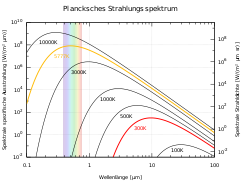 The intensity and frequency distribution of the electromagnetic radiation emitted by a black body are described by Max Planck 's radiation law. With increasing temperature, the maximum of the frequency distribution shifts to higher frequencies, i.e. to shorter wavelengths, in accordance with Wien's law of displacement . The Stefan-Boltzmann law describes that the total emitted energy is proportional to the fourth power of the absolute temperature of the black body.

Radiation means loss of energy and cooling of the body. In the case of a real body, in addition to the lower radiation compared to the black body, the radiation from the environment must also be taken into account, for example when looking at an object either under the open sky or under a roof (e.g. stable, carport).

The attempt to describe blackbody radiation theoretically has contributed significantly to the development of quantum physics . In a purely classical description, blackbody radiation diverges in the UV range (the so-called ultraviolet catastrophe ). Only the assumption by Max Planck in 1900 that matter can only absorb and release radiation energy in the form of certain energy quanta could this puzzle be solved.

An ideal black body cannot be realized. There are no known materials which completely absorb electromagnetic waves regardless of frequency. A soot-covered surface has an absorption level of approx. 0.96 in the visible spectral range - but not at other wavelengths. Many non-metallic substances have a high degree of absorption in the mid-infrared, but can appear white in the visible (e.g. wall paint).

As a rule, only the absorption and emission properties of the radiation source are of interest, but not their shape. Instead of a surface, the opening of a cavity radiator or simply a long blind hole is used. This allows the ideal properties of a black body to be better represented, even if the inner surfaces have a low degree of absorption. 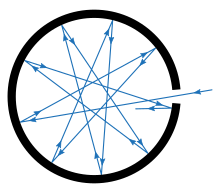 Black body model. A very small hole lets any radiation into a hollow body, but only thermal radiation out.

If an opening is made in the cavity wall that is small enough not to disturb the thermal equilibrium noticeably, the hole absorbs the incident radiation almost ideally, and only thermal radiation emerges through the opening. The radiation emanating from the opening has the properties of a black body if the opening is small compared to the internal volume. The degree of reflection of the inner cavity surface can be significantly greater than zero. Radiation incident from the outside into the cavity is then reflected back and forth in the interior many times, mostly being absorbed and only a small remainder being re-emitted through reflections. Such openings appear practically completely black. To support absorption, the cavity walls are made black and rough if possible. Black bodies used in practice are hollow spheres with an opening or hollow cylinders open on one side . Blind holes can be made in the body for measurement purposes. Black heaters for high temperatures (e.g. up to 1800 K, i.e. around 1500 ° C) consist of ceramic materials on the inside. Absorption bodies in the form of hollow cones are often used for the thermal determination of the radiation power of laser beams. Absorbent coatings depend on the wavelength to be measured.

Technical applications and occurrences in nature

Consider an evacuated cavity with walls of any non-transparent material held at a constant temperature . The walls give off thermal radiation and after a sufficient time a state of thermal equilibrium will be established.

The energy density in the cavity does not depend on the nature of the walls. To prove this, connect two cavities, whose walls have different radiation properties but the same temperatures, through an opening. A color filter in the opening only allows radiation of that frequency to pass. Radiation is exchanged between the cavities through the opening. If the spectral energy density were higher at the frequency in one cavity, more radiation would flow into the lower-energy cavity than vice versa and the energy density and thus the temperature in the second cavity would increase. This spontaneous emergence of a temperature difference would contradict the second law of thermodynamics . Therefore, the spectral energy densities at all frequencies and therefore the total energy density in both cavities must be identical.

In a similar way it can be shown that the radiation in the cavity must be homogeneous , isotropic , unpolarized and independent of the volume of the cavity.

The spectral energy density in the cavity thus represents a universal function that only depends on the frequency and temperature:

Because of the constant conversion factor , the spectral density of the cavity radiation must also be universal :

If the body placed in the cavity (e.g. an absorbing gas) does not absorb all of the incident radiation, it also has to emit less radiation to replace the absorbed radiation. It has the directional spectral absorption factor , that is, it absorbs the fraction at the temperature and the frequency of the radiation which comes from the direction described by the polar angle and the azimuth angle . In order to maintain thermal equilibrium, the body must in turn radiate as much energy at every frequency and in every solid angle as it absorbs from the cavity radiation. So its spectral radiance is

Since the emission of any body can never be greater than that of a black body, the following applies:

where is the directional spectral emissivity of the body ( ). Comparison with the previous equation shows:

"A good absorber is also a good emitter."

Influence of the wall materials

In the cavity there is a balance between the radiation and the spectrum of a black body.

The black body for reference

Color temperature according to Planck's law of radiation

The color temperature is a comparative value that describes the maximum intensity curve of a black body according to Planck's law of radiation and Wien's law of displacement . This intensity maximum shifts to shorter wavelengths with increasing temperature.

Incandescent lamps with a filament temperature of around 2700 to 2800 K, like the classic incandescent lamp, or of 3100 to 3200 K, like the halogen lamps, have their radiation maximum in the near infrared . The spectral component in the visible range gives a yellowish impression. The color impression of the radiation of a thermal radiator as well as a black radiator can be used to determine its temperature.

At around 5500 Kelvin, the maximum intensity is in the middle of the visible range and roughly corresponds to bright sunlight in a clear sky. If the temperature rises further, the intensity maximum is in the ultraviolet and, at further increased temperatures, reaches the range of X-rays .

With increasing temperature, the maximum radiation intensity of a black body shifts to shorter wavelengths, the color impression changes from red to bluish-white. The color of a (heat) light source can be specified as the temperature of a comparable black body. This gives the color temperature of the light source. This also applies analogously to other self-emitters. A prerequisite is that their properties do not deviate too much from a gray body .

For the visible range, an approximation of Rayleigh and Jeans applies at high temperatures . The spectral radiance, that is the power per unit area and solid angle and per frequency interval, is proportional to the square of the frequency.

An increase in temperature over a certain range no longer influences the relative radiation distribution in the visible, the color impression remains "white". In the CIE standard color table , the "black body curve" ends at a point that is a very unsaturated violet hue. This point corresponds to the color temperature "infinite".

The effective temperature of the sun is 5777 K.

The temperature that a black body would have to have according to Stefan-Boltzmann's law in order to emit the same radiant power per unit area as a given radiator is called the effective temperature of this radiator. The less the radiator corresponds to a black body, the more it deviates from the actual temperature. The term “effective temperature” therefore only makes sense for radiators whose radiation properties are not too different from those of a black body, i.e. for stars and filaments . In fluorescent lamps , polar lights and other light sources with a strong line spectrum using the term color temperature .

A real body usually has different emissivities at different frequencies and possibly even in different radiation directions. For a complete characterization the emissivity as a function of the frequency and the beam angle must be given.

A Lambert radiator is a body with a direction-independent emissivity, it emits completely diffuse . A gray body is a body whose emissivity is the same at all frequencies. For both cases there are simplifications for radiation calculations, so that real bodies - as far as possible - are approximately considered as diffuse radiators and gray bodies.

The designation “black” body can lead to the erroneous assumption that generally all black -looking materials have a high degree of absorption or emissivity, including in the infrared wavelength range. The “black” in “black body”, however, refers as a generalized term to the entire electromagnetic spectrum, not to a black impression in the range of light that is visible to humans. Specifically, this means: