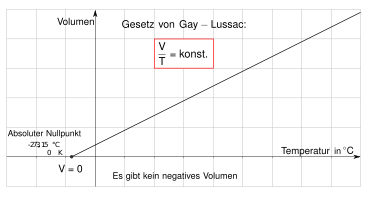 Absolute zero, illustrated with the help of Gay-Lussac's law: the quotient of volume and temperature is always constant. Since a negative volume does not make sense physically, there must also be a lower limit for the temperature.

The absolute zero point designates the lower limit value for the temperature . This defines the origin of the absolute temperature scale and is set as 0  Kelvin , which is equal to −273.15  degrees Celsius . The existence and extrapolated value of absolute zero can be derived from Gay-Lussac's first law .

According to the third law of thermodynamics , the absolute zero point is an ideal value which cannot be reached; however, real temperatures can be achieved close to absolute zero without limitation. With laser cooling , samples could be cooled down to a few billionths of a Kelvin.

In 1699, Guillaume Amontons discovered that the volume of a quantity of gas changes linearly with its temperature. Since the volume of a gas should not become negative, however, he concluded that there must be an absolute zero point at which the volume of the amount of gas would be zero. By extrapolating his measured values, he estimated the location of this zero point and came to a value of minus 248 degrees Celsius. However, this method must be viewed very critically, since the law of volume reduction only applies to ideal gases , but not to substances that change their physical state, e.g. become liquid.

William Thomson, 1st Baron Kelvin , discovered in 1848 that it is not the volume reduction that is decisive for this question, but the loss of energy. It does not matter whether it is a gas or solid substance. Thomson then proposed to define a new, absolute temperature scale to which the change in volume is proportional. This new temperature scale no longer has negative values, starts at zero (this corresponds to minus 273.15 degrees Celsius, see properties of the Kelvin scale ) and increases so that a temperature difference of one Kelvin corresponds to a temperature difference of one degree Celsius. This same step size was achieved by stipulating that the Kelvin is the 273.16th part of the thermodynamic temperature of the triple point of water - this is 0.01 ° C. The unit for this temperature scale was initially called degree A (A for absolute), later K (K for Kelvin ). Since 1967, by definition, the Kelvin is no longer supplemented with degrees (°).

“If you suddenly remove the magnetic field, the thermomagnetic cooling effect occurs . In this way, a temperature of 0.05 K was achieved with potassium chrome alum. In 1935 it was even reached 0.005 K. [...] In order to correctly assess the progress achieved, one would actually have to use the logarithmic temperature scale as suggested by Lord Kelvin. According to this, a decrease from 100 K to 10 K would have the same meaning as [...] from 1 K to 0.1 K. "

Physical systems with temperatures close to absolute zero exhibit some special behaviors such as superfluidity and Bose-Einstein condensation . These temperature ranges of low temperature physics can only be reached with special methods.

At normal pressure, all elements are solid at zero, with the exception of helium , which is in a liquid or superfluid phase there.

Nernst's theorem makes thermodynamic statements about the zero point in connection with entropy . Perfect crystals reach a constant value for the entropy at the zero point , since the entropy is defined according to the statistical definition as the logarithm of the number of possible microstates multiplied by the Boltzmann constant and there is only one possible realization of the observed macrostate . In (amorphous) glasses there are several equal energy realizations of a state with , so that the entropy is different from zero.