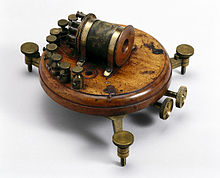 William Thomson, 1st Baron Kelvin or Lord Kelvin for short , OM , GCVO , PC , FRS , FRSE , (born June 26, 1824 in Belfast , Province of Ulster , United Kingdom of Great Britain and Ireland , † December 17, 1907 in Netherhall near Largs , Scotland ) was a British physicist in the fields of electricity and thermodynamics . The unit Kelvin was named after William Thomson, who introduced the thermodynamic temperature scale at the age of 24. Thomson is known for both theoretical work and the development of measuring instruments.

William Thomson was the son of James Thomson (1786-1849), who was professor of mathematics in Belfast and from 1832 professor of mathematics at the University of Glasgow . One brother, James Thomson , was an engineer. His mother Margaret Gardiner died when he was six years old (1830) and he was raised by his father, who originally wanted to be a Presbyterian minister and raised his children strictly in this belief. He also received his first mathematics lessons from his father. From 1834 he studied at the University of Glasgow, with actual university studies taking place from 1838, including astronomy, chemistry and physics. In 1839 he received a gold medal from the university for an essay on the figure of the earth. The training in theoretical physics took place at that time in Glasgow under the professor of natural philosophy William Meikleham and the astronomy professor John Pringle Nichol, often under the influence of French physicists and mathematicians such as Pierre Simon de Laplace (especially his celestial mechanics), Joseph-Louis Lagrange , Augustin Jean Fresnel , Adrien-Marie Legendre and Joseph Fourier , whose Analytical Theory of Heat Thomson studied. This was in contrast to Cambridge, where there wasn't even a chair in natural philosophy at the time. Thomson visited Paris in 1839 and studied in Cambridge from 1841. His first publication in 1841 was a defense of Fourier analysis against mathematical criticism from Edinburgh, and in 1842 he published an essay in which he applied the mathematical treatment of heat flow by Fourier to electricity. In Cambridge he took part in the last part of the Tripos exams in 1845, for which he prepared under the private tutor William Hopkins , then known for these preparatory courses , which took up a large part of his time, and became Second Wrangler . At that time neither electricity, magnetism nor heat were the subject of the tests, which only changed significantly with the reforms of James Clerk Maxwell . He received a bachelor's degree (BA), won the Smith Prize and became a Fellow of Peterhouse College, Cambridge. Around this time he also studied the work of George Green , which had a great influence on him, and in 1845 went to Paris for further studies, where he worked with Augustin-Louis Cauchy , Charles-François Sturm , Jean-Baptiste Biot and Joseph Liouville, among others Had contact and was in the laboratory of Henri Victor Regnault . At the suggestion of Liouville, he began to deal intensively with the theory of electricity and the physical concepts associated with it at the time (at that time the idea of ​​electrical fluids prevailed, and in addition to theories of long-range effects of the associated forces, ideas about a mediating medium, the ether).

Thomson returned to Glasgow in 1846 when the chair of natural philosophy ( theoretical physics ) became vacant, for which he successfully ran with the support of his influential father. He was Professor of Theoretical Physics in Glasgow from 1846 to 1899, doing research mainly in the fields of electricity and thermodynamics .

Thomson's early work concerned thermodynamics, for example a work on thermodynamics based on Carnot's heat theory in 1848 , in which he introduced, among other things, the absolute temperature scale that was later named after him. Its unit Kelvin in its current form is the SI unit of temperature that has been legally established since 1968 . At that time, his thoughts on thermodynamics were still flawed and it was only the exchange of ideas with James Prescott Joule from 1847 that convinced him of a dynamic theory of heat. In 1847 an intensive collaboration began with the theoretical physicist George Gabriel Stokes , which was then continued in an extensive correspondence over fifty years and initially concerned hydrodynamics.

Thomson was also a forerunner of the dynamic theory of electricity and magnetism (including light as an electrodynamic phenomenon) before James Clerk Maxwell . Thomson used the dynamic theory of heat as a suggestion. He was also the first to mathematically formulate Michael Faraday's line of force concept . Thomson's theories from the 1850s were a major influence on Maxwell's own theory. Thomson himself hesitated to accept Maxwell's theory for a long time and pursued his own theory, which should deal with electrodynamics, light, chemical processes and gravity in a uniform way via the effect in the ether. He also rejected the atom concept (and supported PG Tait in his attempt to represent atoms as knotted rings in the ether) and later was an opponent of Ernest Rutherford's ideas on radioactivity.

His textbook on theoretical physics Treatise on Natural Philosophy with Peter Guthrie Tait from 1867, which for the first time combined Newtonian, Lagrange and Hamiltonian mechanics with a representation based on the energy concept, was very influential . In it, the force was just a concept derived from the extremal principles of energy. The collaboration between Thomson and Tait, who was a professor in Edinburgh, began in 1861. Several volumes were planned, but only the parts on kinematics and dynamics were published. This was also because in 1873 the Treatise on Electricity and Magnetism by Maxwell appeared, with which Thomson agreed.

Together with James Prescott Joule, he discovered the Joule-Thomson effect in 1852 and the magnetic AMR effect in 1857 . In 1867 Thomson developed the application of Fourier analysis to calculate the tides and constructed the first tide calculator in 1872 . He was also instrumental in the preparation and laying of deep-sea telegraph cables in the Atlantic . On the first cable, which was laid in 1858, he was a director of the company and a technical advisor, but came into conflict with EOW Whitehouse director for failure to follow Thomson's recommendations. There were also patent disputes. The second cable project in the 1860s was more successful. To determine the water depth in cable projects, he invented a Thomson plumbing machine, patented in Great Britain in 1876 . The telegraph equation was not developed by Thomson, but by Oliver Heaviside in 1885. The proceeds from the cable project made Thomson wealthy and were a major reason for his elevation to the nobility and peerage. Among other things, he bought a large property on the Scottish coast in Largs and a 126-ton yacht that he named Lalla Rookh .

Thomson constructed the form of the dry compass that is still used today and also worked intensively on electricity. He developed the Thomson bridge named after him , the Thomson oscillation equation and the Kelvin generator and described the Thomson effect . In addition, he constructed a mirror galvanometer (used in the first telegraph cables across the Atlantic), a voltage balance and, last but not least, the quadrant electrometer. His versatility in almost all areas of physics has resulted in over 70 patents being granted to him. Both scientific recognition and financial independence were thereby granted to him.

He published over 600 scientific papers.

As a professor, he introduced laboratory courses on the same level as theoretical lectures and awarded prizes to gifted students.

Thomson also intervened in the debate about the theory of evolution. In 1862 he estimated the age of the earth to be 25–400 million years, with 98 million years being the most likely value. In 1869 he declared that this time frame was too short for an evolution according to the mechanisms assumed by Charles Darwin and suggested that life had reached the earth with a meteorite . He later narrowed the time when the earth was formed to 24.1 million years and saw this as his greatest achievement. He came to this conclusion because of the still existing geothermal energy , which, according to later knowledge, is partly fed from radioactive processes in the earth's interior. When measurements of radioactive decay later led to higher values, he did not change his mind.

He also clearly demarcated his thermodynamic calculations from what he believed to be "vague observations" by geologists such as Charles Darwin , who had estimated that it must have taken a little over 300 million years for a 500-foot-high limestone cliff in southern England to pass through the sea was eroded.

Lord Kelvin also doubted Darwin's result because in 1862 he assumed that the most permanent energy source for solar radiation was the release of gravitational binding energy proposed by Helmholtz . Assuming that the solar mass is strongly concentrated towards the center, its age would be less than 100 million years. He later narrowed the cooling time of the earth's mantle to 20 to 40 million years. Although he saw Ernest Rutherford suggest radioactive decay as a source of geothermal energy in 1904, he did not share this opinion. The energy released by the sun over geological time periods could only be explained by nuclear fusion from 1920 . 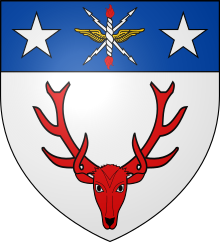 Coat of arms of Baron Kelvin

In 1866 he was knighted and in 1892 as Baron Kelvin, of Largs in the County of Ayr , raised to hereditary nobility . The namesake for the title is the river Kelvin through Glasgow, on which the university is located, and Largs the place of his country residence on the coast. A seat in the House of Lords was associated with the title . Since he left no descendants, the title of nobility expired on his death.