Ernest Rutherford, 1st Baron Rutherford of Nelson (born August 30, 1871 in Spring Grove near Nelson , New Zealand , † October 19, 1937 in Cambridge , United Kingdom ) was a British physicist who received the 1908 Nobel Prize in Chemistry . Rutherford is considered one of the most important experimental physicists .

In 1897, Rutherford recognized that the ionizing radiation from uranium consists of several types of particles. In 1902 he hypothesized that chemical elements change into elements with a lower atomic number through radioactive decay. In 1903 he differentiated radioactivity into alpha radiation , beta radiation and gamma radiation according to their increasing penetration capacity and introduced the term half-life . This work was awarded the Nobel Prize in Chemistry in 1908 .

His best-known contribution to atomic physics is Rutherford's atomic model , which he derived from his experiments in scattering alpha particles on gold foil in 1911 . Rutherford expanded the atomic model of Thomson , who had assumed a uniform mass distribution.

Rutherford demonstrated experimentally for the first time in 1917 that irradiation with alpha particles can convert one atomic nucleus (in his case nitrogen ) into another (in his case into the next heavier element oxygen ). During these experiments he discovered the proton . Under his guidance, John Cockcroft and Ernest Walton "smashed" an atomic nucleus with artificially accelerated particles; Lithium bombarded with protons was converted into two alpha particles, i.e. helium nuclei. Another scientist in Cambridge, James Chadwick , succeeded in 1932 in experimentally demonstrating the neutron , which Rutherford had theoretically postulated years earlier.

Ernest Rutherford was the fourth of twelve children of James Rutherford (1838-1928) and his wife Martha Thompson (around 1843-1935). His parents immigrated to New Zealand as a child . From Spring Grove , the family moved to Foxhill in 1876 . From March 1877, Rutherford attended the Primary School led by Henry Ladley there . In 1883 the family moved on to Havelock , where their father ran a flax mill he built on the Ruakaka River . For economic reasons, the family had to move again five years later, this time to Pungarehu on New Zealand's North Island . Supported by a grant from the Marlborough Education Board, Rutherford attended Nelson College from 1887 to 1889 . There he played in the rugby team and was head boy in 1889. His interest in mathematics and science was encouraged by his teacher William Still Littlejohn (1859-1933).

From February 1890, Rutherford studied at Canterbury College in Christchurch . There, the professor of mathematics and natural philosophy Charles Henry Herbert Cook (1843-1910) promoted Rutherford's mathematical talent, while the professor of chemistry Alexander William Bickerton (1842-1929), who also taught physics, aroused Rutherford's interest in physics. In 1892 Rutherford passed the exams for the Bachelor of Arts , in 1893 he earned a Master of Arts degree and a year later a Bachelor of Science degree . Rutherford's first research dealt with the influence of high frequency Hertzian waves on the magnetic properties of iron and was published in the Transactions of the New Zealand Institute .

During this time, Rutherford lived in the house of the widowed Mary Kate De Renzy Newton, a secretary for the Woman's Christian Temperance Union . There he met her daughter, his future wife Mary "May" Georgina Newton (1876–1945).

Rutherford applied in 1894 for the New Zealand place for an " 1851 Exhibition Scholarship ", a scholarship funded from the surpluses of the Great Exhibition of 1851 in London. He was defeated with his application to the chemist James Scott Maclaurin (1864-1939) from Auckland University College . When Maclaurin did not accept the £ 150 scholarship intended for a study visit to Great Britain, Rutherford was awarded it as the second applicant.

On August 1, 1895, Rutherford left New Zealand on a steamship from Wellington . During a stopover, he demonstrated his Hertzian wave detector to William Henry Bragg at the University of Adelaide and received a letter of recommendation from Bragg. In October 1895 Rutherford began his work at the Cavendish Laboratory of the University of Cambridge , directed by Joseph John Thomson . Initially, he was concerned with improving the sensitivity of his detector, which he could soon use to detect radio waves at a distance of about half a mile. Thomson, who quickly recognized Rutherford's experimental talent, invited Rutherford at the beginning of the Easter semester in 1896 to help him investigate the electrical conductivity of gases . They used the X-rays discovered a few months earlier to trigger conductivity in the gases. Rutherford developed the experimental techniques to measure the rate of recombination and the velocities of the ions formed under the action of the X-rays . In the following years Rutherford continued these experiments using ultraviolet radiation .

After two years in Cambridge, Rutherford received his "BA Research Degree" in 1897. Through Thomson's advocacy, he was awarded the 250 pound per year Coutts Trotter Fellowship of Trinity College in 1898 , which enabled Rutherford to spend another year at Cambridge.

Professor in Montreal, Manchester and Cambridge

The newly constructed physics building at McGill University was one of the most modern research facilities of its time. 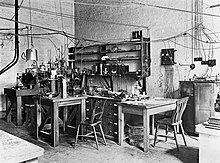 In 1898 he received a call to the McGill University in Montreal ( Canada ), where he worked until 1907. For the research he carried out during this time, he received the Nobel Prize in Chemistry in 1908 .

He then began to teach at the University of Manchester in England , where he worked with future Nobel Prize winners such as Niels Bohr and Patrick Blackett , among others .

During the First World War , he traveled to the USA in 1917 with Henri Abraham and Charles Fabry to discuss the issue of anti-submarine defense .

In 1919 he went to Cambridge as a professor , where he was director of the Cavendish Laboratory . 1921 his work appeared Nuclear Constitution of Atoms (dt .: About the core structure of atoms) . From 1925 to 1930 he was President of the Royal Society .

In 1933 he assisted William Henry Beveridge in founding the Academic Assistance Council (AAC, now the Council for Assisting Refugee Academics ), of which he became the first president.

In 1934, together with Mark Oliphant and Paul Harteck, he succeeded in the discovery of tritium and the first targeted implementation of a nuclear fusion reaction .

Rutherford's ashes were buried in Westminster Abbey in London near the grave of Isaac Newton .

Rutherford is one of the world's most honored scientists. The British crown ennobled him in 1914 as a Knight Bachelor , accepted him in 1925 in the Order of Merit and raised him to hereditary peer in 1931 as Baron Rutherford of Nelson , of Cambridge in the County of Cambridge .

A 1,906 newly discovered and Willy Marckwald described uranyl -mineral received his honor the name rutherfordine . In addition to the Nobel Prize in Chemistry, which was awarded to him in 1908, Rutherford received numerous scientific and academic prizes and honors. The Royal Society awarded him the Rumford Medal in 1904 and honored Rutherford in 1922 with their highest honor, the Copley Medal in gold. The Accademia delle Scienze di Torino honored him in 1908 with the award of the Bressa Prize (Premio Bressa). The Columbia University gave Rutherford every five years awarded Barnard Medal for the year 1910th

In mid-1946, Edward Condon and Leon Francis Curtiss (1895-1983) proposed by the US National Bureau of Standards to introduce a new physical unit Rutherford with the unit symbol rd for measuring activity , but this did not prevail.

In the 2005 New Zealand's Top 100 History Makers series , Rutherford was voted the most influential New Zealander in history. A memorial was built in his place of birth and his former primary school in Foxhill is keeping his memory alive with the Rutherford Memorial Hall.