The Franklin Institute , named after the scientist and statesman Benjamin Franklin , is a science center and technology museum in Philadelphia , Pennsylvania . It was founded on February 5, 1824 by Samuel Vaughn Merrick and William H. Keating and is one of the oldest scientific institutions in the USA.

Franklin Institute of the State of Pennsylvania share dated November 11, 1914

Originally the museum was housed in a building at 15 South 7th Street . In 1834 a committee for meteorology was founded in cooperation with the American Philosophical Society under the direction of James Pollard Espy , which set up a network of stations for weather observation. In September 1884, the first US Electrical Engineering Exhibition was held on South 7th Street. Nikola Tesla gave his lectures on wireless power transmission in 1893. In 1934 the facility moved to its current location at Benjamin Franklin Parkway, and in the same year Philo Taylor Farnsworth demonstrated the first all-electronic television system at the Franklin Institute . 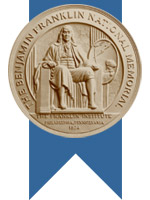 The Franklin Institute has been awarding various awards for outstanding technical and scientific achievements since 1824, although the names have changed over the years. Important awards from 1875 were the Elliott Cresson Medal , the Howard N. Potts Medal , which was awarded from 1911, the Franklin Medal from 1915, the John Price Wetherill Medal and from 1924 the Louis E. Levy Medal for authors of outstanding articles in the Journal of the Franklin Institute. From 1968 the Albert A. Michelson Medal in physics was awarded.

From 1998 onwards, all of these different awards were grouped under the name Benjamin Franklin Medal , which is awarded annually in several different disciplines such as electrical engineering , mechanical engineering , physics and biology , and before 1998 also in materials science . Well-known historical awardees included Henry Ford , Nikola Tesla , Marie Curie , and Thomas Alva Edison .

The most recent awards from the Franklin Institute are the Bower Award for Business Leadership and the $ 250,000 Bower Award and Prize for Achievement in Science . Both prizes go back to the foundation of the chemical industrialist Henry Bower and have been awarded since 1990.

In 1826, the Journal of The Franklin Institute ( ISSN  0016-0032 ) was created to publish patent information and document scientific and technical achievements. It is one of the oldest journals in the United States and is now primarily concerned with engineering and applied mathematics .