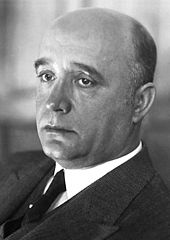 Friedrich Carl Rudolf Bergius (born October 11, 1884 in goldsmiths near Breslau , today part of the Fabryczna district of Breslau ; †  March 30, 1949 in Buenos Aires ) was a German chemist and entrepreneur . Bergius created the basis for the Bergius Pier process for producing gasoline and diesel oil from coal and hydrogen under high pressure, as well as an improved process for converting wood into sugar . His chemical-industrial development work was made difficult by the fact that it took place at a time of great catastrophes: two world wars, hyperinflation and the banking crisis.

In 1931 Bergius and Carl Bosch received the Nobel Prize in Chemistry “for their services to the discovery and development of high pressure chemical processes”. Bergius said at the award ceremony that he had "set himself the goal of looking for knowledge that should be of use to mankind".

Friedrich Bergius was the son of the factory owner Heinrich Bergius (1848–1906), who ran the chemical factory goldsmiths and came from an old German family who had already made some merits in the field of science. His ancestors include Professor Johannes Bergius (* 1587) in Frankfurt (Oder) , who was court preacher at the Brandenburg court, and Carl Julius Bergius (* 1804), professor of economics in Breslau. The mother Marie b. Haase was a daughter of the classical philologist Friedrich Haase . Friedrich Bergius had four sisters: Johanna, Frieda, Julie and Margarete.

Studied in Breslau and Leipzig

After attending a secondary school, Bergius acquired practical knowledge in a laboratory in a steel works. He then began studying chemistry and chemical technology at the University of Wroclaw in 1903 . The outstanding lecturers with whom he studied were Walter Herz (1875–1930), Albert Ladenburg (1842–1911) and Richard Abegg (1869–1910). In 1907 he gained in Leipzig Promotion at Arthur Hantzsch (1857-1935) with the theme of absolute residual sulfuric acid as a solvent for Dr. phil.

He then moved to Berlin to work with Walter Nernst (1864–1941) for two semesters and worked at the Institute for Physical Chemistry with chemical equilibria of gas reactions; there he met the chemist Matthias Pier . He expanded his knowledge in 1909 with Fritz Haber (1868–1934) in Karlsruhe through additional knowledge in the field of high pressure reactions.

In 1909 he moved to the Physics Institute in Hanover, where Max Bodenstein taught. Due to the insufficient security equipment at the institute, Bergius set up a private laboratory in the immediate vicinity of the institute. There he immediately dealt with heterogeneous high pressure reactions at temperatures of 500 ° C and pressures of 200 at. Initially, he dealt with the production of hydrogen gas through the action of water and coal at high pressures (200 at) and high temperatures. Through chemical analyzes, he was able to determine that under these conditions peat in the reactor changed into a coal-like substance in a few minutes through the coalification process , a process that takes several million years in nature. Cellulose, lignin or wood could also be converted into a coal-like compound.

In 1912 Bergius became a lecturer for pure and applied physical chemistry at the TH Hannover with his habilitation thesis Application of high pressures in chemical processes and the reproduction of the development process of hard coal with the experts Bodenstein and Hermann Ost .

In the summer of 1913, a colleague of Bergius, H. Specht, converted the carbonization product of the peat into a benzene-like organic liquid at 450 ° C and a hydrogen pressure of 150 atm. The experiment was repeated with brown and hard coal and an organic liquid similar to benzene was also formed.

In 1913 he applied for a patent for a process for " liquefying coal ". With this process of hydrogenating coal, he laid the foundation for the later Bergius-Pier process , which enabled the production of synthetic fuels independently of crude oil.

On January 1, 1914, he joined Theodor Goldschmidt AG in Essen and took over the management of the scientific laboratory. He was also on the company's board of directors. In 1916 the laboratory was relocated to Mannheim-Rheinau in order to set up a semi-technical test facility there in order to check the previous findings of coal research. The aim of using his results industrially required considerable investment funds, so that in 1918 a consortium for coal chemistry was founded. However, inflation soon led to funding problems. Bergius was able to acquire the necessary equity capital through other companies such as Shell and ICI . In 1924 Theodor Goldschmidt AG withdrew from the consortium, Bergius continued to work there.

However, larger projects were not possible without sufficient capital. In 1925, Bergius therefore left all patent rights to BASF , which in the same year merged with the other chemical companies ( Bayer , Hoechst, etc.) to form IG Farben AG . A ten-year consultancy activity was planned for Bergius - but no use was made of this, so Bergius left the further process development.

After the patent rights were sold, Bergius lived in Heidelberg, where he maintained contacts with artists, politicians and writers. His liberal political views connected him with Gustav Stresemann . In 1916 he had already dealt with the chemical conversion of wood into sugar at Theodor Goldschmidt AG and turned to this wood chemistry from 1925. The first plant for wood saccharification was developed in Mannheim-Rheinau under the direction of Bergius. The process engineering implementation in a continuously running large plant was very difficult. Only later did the Mannheim-Rheinau plant succeed in extracting around 66 kg of sugar from 100 kg of wood.

Inflation and banking crises coincided unfavorably with the entrepreneurial projects. The company ran into financial difficulties. Bergius also had to make a financial contribution personally. A bailiff who withheld Bergius' prize money traveled with him to award the Nobel Prize. From 1933 the situation improved because "the Nazi state was interested in the further development of the Bergius process within the framework of the autarky policy", so that Bergius could get state money for his company. Bergius became a member of the NSDAP and got to know its leading representatives personally. His attitude towards the Third Reich was positive, to which his national-conservative views contributed.

In 1938 he tried to rent or buy the Rhenanenhaus in Heidelberg's old town to set up a chemical laboratory.

Due to the financial difficulties of his ventures, Bergius had to use all of his private fortune and ultimately also sell his house in Heidelberg. It didn't help, however; a short time later he was a penniless inventor. He moved to Berlin. There he was given a private laboratory for research purposes. After the Second World War he received orders to build chemical plants in Spain and in Argentina in 1947. Bergius died in Buenos Aires in 1949 at the age of 64, where he found his final resting place in the German cemetery in Chacarita .

Further developments of the Bergius process

Hydrogenation plants that work with the Bergius Pier process were built in various countries from the mid-1920s . In the German Reich , the systems became particularly important as part of the self-sufficiency efforts from 1933. By 1944, a total of 14 hydrogenation plants in the German sphere of influence went into operation using the IG Farben's high-pressure hydrogenation process, which mainly produced aviation fuels , but also petrol , lubricating oils, diesel fuel and other synthetic products.

In the USA, after the Second World War, various hydrogenation processes under the name CtL (Coal to Liquid) were carried out by Kellog and in South Africa by Sasol , with the Fischer-Tropsch synthesis developing in particular. In addition to the liquefaction of coal, further research was carried out on the processes for saccharifying wood . Processes for the saccharification of wood were used economically in the Soviet Union (e.g. Chalov or Riga processes) and from 1953 to 1959 in Japan (Noguchi-Chisso process). In the Eastern Bloc countries , the hydrogenation plants remained in operation. Various pilot plants for coal gasification have been built in the USA, including in Baytown (Texas), Catlettsburg (Kentucky) and Fort Lewis (Washington). Test facilities were also built in Germany: in Bottrop (1981, production of 200 tons of coal oil / day) and in Saarland ( Völklingen- Fürstenhausen).