Motor gasoline (abbreviated "gasoline") is a complex mixture of about 150 different hydrocarbons whose boiling range is between those of butane and kerosene / petroleum . It is mainly made from refined components of petroleum refining and used as a fuel . Motor gasoline is one of the “petrol fuels”; there are also other petrol fuels .

The original name comes from the Arabic word for benzoin , luban jawi - " incense from Java ". This expression came to Europe through Arab trade relations with Catalonia . With the dropping of the first syllable and the change of the first a to e , Italian benjuì emerged , and Middle Latin benzoë , from which the German word Benzol developed.

In 1825 Faraday discovered the compound later called benzene in empty gas cylinders, he called it bicarbure d'hydrogène at the time before Eilhard Mitscherlich renamed it gasoline . However, he used it to describe today's benzene. Mitscherlich named the substance after the starting material he used, benzoin resin. The assignment to today's gasoline was done by Justus von Liebig .

The term “petrol” therefore does not go back to the engine builder Carl Benz , as is sometimes erroneously assumed , in contrast to diesel fuel , which is actually named after Rudolf Diesel . The discovery of the gasoline-air mixture as a suitable fuel source for automobiles goes back to Siegfried Marcus .

There are different types of gasoline, which differ in their anti- knock properties and in the composition of the hydrocarbon mixture to achieve this.

Car manufacturers prescribe a minimum octane number for their engines ; Detonation damage can occur on grades with lower octane numbers unless the engine is able to adjust to this with the help of a knock sensor by adjusting the ignition timing within certain limits and with a slight loss of performance. With grades with a higher octane number, on the other hand, slight increases in performance or efficiency are also possible. However, since the adjustment limit is usually designed by the manufacturer for a specific octane number specified in the operating instructions, many engines cannot take advantage of the new 100-octane petrol.

In Germany, since November 2007, the price of normal petrol has been adjusted to that of premium petrol. Representatives of automobile clubs expressed the assumption that the petroleum companies wanted to get rid of normal petrol in the medium term in order to have more revenue and lower costs, which the petroleum companies rejected as unfounded in 2007. In mid-September 2008, Shell was the first major mineral oil company to completely remove normal petrol from its range because it was hardly ever bought. Regular petrol disappeared from German petrol stations in 2010 and the pumps were switched to Super E10. 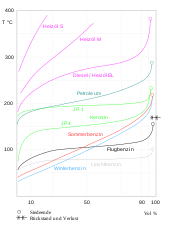 Boiling curves compared to other fuels

The main components of gasoline are mainly alkanes , alkenes , cycloalkanes and aromatic hydrocarbons with 5 to 11 carbon atoms per molecule and a boiling range between 25 °C and ≈210 °C. In addition, various ethers (such as MTBE , ETBE ) and alcohols ( ethanol , very rarely methanol ) are also added to the crude petrol . The ethers or ethanol increase the anti-knock properties of the finished gasoline.

In the first step, the hydrocarbons are obtained from crude oil by fractional distillation . After possibly several refining steps, the following (mostly desulfurized ) components (selection) are obtained:

The following components do not come from the above-mentioned refinery production, but are added to the gasoline when the individual components are mixed:

Typically, only a selection of these components are produced in a single refinery . Ether and ethanol are usually bought in.

The components are i. i.e. R. stored separately in tanks and mixed from there via a blending station to the finished product. The mixing ratios differ depending on the variety (see apertures ). For example, more high-octane components are added to high-octane grades. Some specifications ( DVPE , E70 ) vary depending on the season. A distinction is made between summer, transitional and winter goods. In order to prevent the formation of vapor bubbles in summer, fewer low-boiling components (butane, isopentane) are used in the blend. A proportion of more low-boiling components in winter gasoline, on the other hand, makes cold starts easier.

In addition to the most important quality , octane number (RON and MON), the following specifications (see below) have a significant influence on the blend :

The blend must be designed as economically as possible, i. H. RON or MON, DVPE and aromatic content should be "approached" as far as possible. Of course, such criteria differ from refinery to refinery. The price structure of the product environment ( jet price , MTBE price , naphtha price ) also influences the blending strategy.

In the desulfurization of petroleum products, sulfide groups are cleaved from the carbon chains by hydrodesulfurization . This produces hydrogen sulfide , which is removed by amine scrubbing and then converted to elemental sulfur using the Claus process , among other things. Desulfurization is a prerequisite for usability in engines with catalytic converters .

The basic fuel does not differ between the various mineral oil companies , it often even comes from the same refinery . An additive package that is specific to the group supplied is added to it, usually by means of a so-called "end point dosing" directly before loading into the tanker truck . These additives include antioxidants, anti-corrosion agents, detergents (protection against deposits in the injection system) and carburetor anti-icing agents.

Around 19.5 million tons of motor gasoline were produced in Germany in 2014.

Leaded petrol has been banned in the EU since 2000 (see development of petrol ) . Only aviation fuel may still be leaded. However, the addition "lead-free" is still included in the variety designations. September 1, 2021 was the last time leaded gasoline was sold in Algeria .

Synthetic petrol was obtained in Germany from the 1920s until the end of the Second World War due to a lack of oil, among other things by liquefying coal (e.g. Leuna-Benzin ). Today, various fuels are referred to as synthetic gasoline , which differ from conventional fuels in the manufacturing process and changes in the chemical structure.

With the complete combustion of one liter of gasoline, 2.32 kg of carbon dioxide are released directly in addition to water. 15-20% additional CO 2 emissions have already been generated by the time it is made available at the filling station, so a total of approx. 2.7 kg of CO 2 per liter of petrol must be assumed.

According to a Shell study, 15–20% of the total CO 2 emissions ( well-to-wheel ) are generated in the production and provision of petrol and diesel fuels ( well-to-tank ).

The most important types of petrol are specified in the EN 228 standard.

In addition to the (minimum) octane number , the following important specifications must also be met:

According to § 13 of the Ordinance on the Quality and Labeling of Fuels (10th BImSchV), the guaranteed qualities at the pumps and at the filling station must be “made clearly visible” in commercial transactions. In Germany, therefore, the round stickers required by the 10th BImSchV (Appendices 1a-b and 2a-b) can be found on all petrol pumps with the text:

Due to EU regulations, Super E10 with an addition of up to 10% bioethanol has been coming onto the German market since January 1, 2011. For this fuel, the 10th BImSchV prescribes additional warnings on the E10 compatibility of the vehicles. See also: 10. BImSchV: Markings on petrol pumps .

Around 18.5 million tons of motor gasoline were consumed in Germany in 2014 (of which around 2,000 tons were normal gasoline). Since a disproportionately large amount of diesel fuel is consumed in Germany, some of this has to be imported and some made available through increased crude oil imports. The resulting production surplus of gasoline (see production ) is exported (mainly to Switzerland and the USA).

The prices for motor gasoline (trade name: Regular = RON 91, Premium = RON 95, Premium Plus = RON 98) in Europe are based on the Rotterdam market. Gasoline is traded in US dollars per 1,000 kg (US$/t). Various publications such as Platts , ICIS and OMR report (sometimes daily) on current trading prices and volumes. The reference density used commercially (to put the price of a current batch of a given density in relation to the listing) is 0.745 kg/dm³ for regular and 0.755 kg/dm³ for all premium grades. Furthermore, transport costs and the margin of fuel trading must also be taken into account.

In addition to the above price amounts, which are reflected in the product price and contribution margin, there are also taxes and duties. 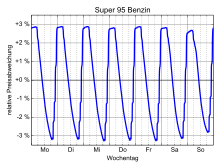 Average weekly course of the price fluctuations of Super 95 petrol in Germany in the period from November 2014 to June 2015. During the day the price decreases continuously, only to then rise sharply again after the closure of some petrol stations from 8:00 p.m.

In order to uncover any violations of antitrust law, a market transparency office for fuels was set up at the Federal Cartel Office, which is intended to create market transparency as far as possible at petrol stations . On December 1, 2013, it started regular operation.

With the product price and the contribution margin (which includes the oil storage amount) as well as the energy tax (petroleum tax), a “new” net price is determined on which VAT of 19% is then charged.

In Switzerland, the costs for mineral oil tax , the climate cent , the import fee for compulsory stocks and value added tax are added to the import price.