The fuel consumption indicates the amount of fuel that an internal combustion engine burns within a certain time or that is consumed when a vehicle covers a certain distance .

For road vehicles in Europe, the average consumption over a distance of 100 kilometers is usually used as a comparison value. For other land vehicles as well as air and water vehicles and for drives, specifications in liters per hour (l / h) or kilograms per hour (kg / h) are common. For combustion engines themselves, the specific fuel consumption in grams per kilowatt hour (g / kWh) is an important parameter.

The energy supplied in chemically bound form ( calorific value of the fuel) is converted into mechanical work in the combustion engine . However, the thermal efficiency only reflects the efficiency of the energy conversion, without making quantitative statements about the chemical energy supplied and the mechanical work performed. The energy of the fuel not taken as mechanical work is mostly lost as thermal energy ; therefore, for example, to assess the fuel consumption of vehicles, other specific, usage-dependent reference values ​​such as distance covered, time, passenger- kilometers or tonne-kilometers are used .

In the case of internal combustion engines , the amount of fuel consumed per unit of work is usually specified, i.e. the specific fuel consumption in g / kWh or kg / kWh. The specification in g / kWh is mainly for the best point, the operating point with the highest fuel efficiency. The actual specific consumption as a function of speed and power output is shown in a consumption map, the graphic representation of which is reminiscent of a clamshell. This is why the consumption map is also referred to as a shell diagram .

For rocket engines , the specific fuel consumption is given as a specific impulse .

If the specific heating energy of the fuel ( ) and the specific fuel consumption of the machine ( ) are known, the effective (useful) efficiency can be calculated.

In the case of steam engines and turbines as well as combustion engines and turbines , the efficiency corresponds to the part converted into mechanical energy to the calorific value energy of the fuel. Modern gas-steam combined cycle power plants can convert up to 60% of the calorific value into electrical energy, diesel generators up to 50% and coal-fired power plants around 40%.

Calculation of CO 2 emissions based on fuel consumption

In the discussion about the greenhouse effect , the proportion of carbon dioxide (CO 2 ) in the exhaust gases is assessed. In this sense, an ideal fuel (for vehicles close to the ground) is hydrogen . It is completely converted into water (vapor). ( Water vapor is a strong greenhouse gas in the upper layers of the atmosphere , but acts as a lower cloud, lowering the temperature, see water vapor # climate effects .) The other extreme is pure carbon (coal), it burns completely to carbon dioxide (CO 2 ). Common fuels mainly consist of hydrocarbons and lie in between (hydrogen is mainly obtained from hydrocarbons, which then also releases carbon dioxide; see main article hydrogen). The carbon content of fuels is constant and a carbon atom with two oxygen atoms forms a CO 2 molecule. Other connections are hardly formed. The amount of CO 2 generated can therefore be calculated directly from the consumption by adding 32 g of oxygen to each 12 g of carbon according to the molar mass .

In addition to water and small amounts of other combustion products, the combustion takes place 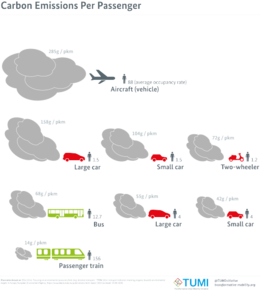 When one liter of diesel is burned, about 14% more CO 2 is produced than when one liter of gasoline is burned, i.e. if a gasoline engine consumes about 14% more than a diesel engine, the engines are equivalent in terms of CO 2 emissions . As a result, gasoline and diesel vehicles cannot simply be compared based on fuel consumption measured in liters. The reasons are differences in the specific weight (density of diesel around 12% higher) and in the carbon content in the fuel, which is higher in diesel.

These are averaged values . Driving uphill increases the emissions drastically, while driving downhill with the engine cut-off cause no kilometer-related emissions.

Conversion between l / 100 km and mpg

In the Anglo-American measurement system , the fuel consumption of vehicles is given in miles per gallon . The abbreviation is mpg or MPG , or MPGe for the equivalent for electric vehicles. The unit of mpg is the distance traveled in miles (1.609 km) that uses one gallon of fuel. In some African countries, in Italy, Japan and South America as well as partly in the Netherlands, the unit kilometer per liter is common.

The following parts of this article appear since 2017 is out of date to be : it is now the Worldwide harmonized Light vehicles Test Procedure short WLTP other driving cycles are therefore not "widespread".
Please help to research and insert the missing information .

For motor vehicles in Europe, the fuel consumption is usually in liters per 100 km distance for the standardized driving cycle according to 70/220 / EEC . Above all, it represents a comparability of vehicles through uniform measurement; a statement about the actual consumption of a vehicle type in daily driving is of secondary importance. It is therefore only of limited significance with regard to the assessment of the economy and the level of CO 2 emissions from automobiles . The value was previously determined by the vehicle completing a set driving cycle and measuring the amount of fuel used. Critics complain that experienced drivers are used to determine the data who achieve the lowest possible consumption within the specifications.

In order to create uniform framework conditions, the determination of the fuel consumption has generally been carried out on a roller dynamometer since January 1, 1996 .

The standardized driving cycles represent average profiles. They make the vehicles comparable with each other, but do not match the usage profile of each customer, in particular not with the profile of customers who drive with little foresight (frequent acceleration and braking), who spend a large part of their driving distance in Driving short distances and city traffic and / or driving very high speeds on motorways.

The consumptions resulting from the various cycles differ in some cases considerably and are therefore not directly comparable with one another. Technical measures taken by automobile manufacturers to reduce fuel consumption relate to more efficient engines, a reduction in air resistance and rolling resistance of the tires, and alternative drive concepts. Since newer generations of vehicles are usually wider and taller, the increase in the frontal area stands in the way of an improvement in air resistance through the value . In addition, usage behavior (“ energy-saving driving style ”) can significantly reduce energy consumption.

Consumption related to engine power is rarely given in order to propagate the supposed efficiency of a powerful engine. For this purpose z. B. the fuel consumption determined in the NEDC divided by the nominal power. However, this marketing statement (see also greenwashing ) has no meaning at all, since consumption occurs at maximum power that is far beyond the values ​​determined in the driving cycles and there is no direct connection between the nominal power of an engine and the consumption in a standardized cycle.

In Austria, for many years, car sales brochures, advertisements and posters by dealers have had to provide information on fuel consumption in a - relatively small - minimum font size. Initially, specifications for driving at 90 km / h, 120 km / h and city traffic were common, later also a “third mix” of these. Since 2010, the information has been based on urban and land transport and a 1: 2 weighted mean.

In contrast to Germany or Austria, the usual fuel consumption information in Italy states the distance that can be driven with one liter of fuel. The following applies for the conversion: 1 / (x liters / 100 km) = y km / (1 liter). Example: The specification 4.2 l / 100 km corresponds to 23.80 km / 1 liter.

Since trucks and buses are difficult to represent using the NEDC that applies to cars , other framework conditions apply to them, which are written down in DIN 70030 (Part 2). These vehicles in accordance with DIN 70010 (which also include trucks and buses) must also be packaged with standard lubricants and operating parameters (e.g. tire pressure) during the test drive. The vehicle weight corresponds to the average weight (average of maximum permissible and empty weight). Strict requirements are also placed on the environmental conditions. So dry and windless weather of a certain temperature and a certain air pressure must prevail. The test speed corresponds to 75% of the maximum vehicle speed. To compensate for uncertainties, the fuel consumed over a test track must be increased by 10%. In the commercial vehicle sector, fuel consumption accounts for up to 30% of the vehicle's operating costs. This is especially true for long-distance traffic, in which the vehicle covers several hundred kilometers every day. Since commercial vehicles are generally viewed as capital goods - the owner wants to earn money with them - fuel consumption is very important in the commercial vehicle segment and is continuously optimized. Fuel consumption is not only influenced by the vehicle technology, but also to a very large extent by the behavior of the driver and, to a certain extent, the maintenance status of the vehicle.

The determination of the manufacturer's information takes place without exception on roller dynamometers and according to Europe-wide standardized driving cycles ( NEDC ), which are intended to depict a journey in a European city and on country roads. The vehicle must have a certain load condition and above all the standard equipment. The average consumption values, which are displayed in the vehicle using an on-board computer , often deviate up or down by up to 10% from the actual consumption value . The reason for this is, among other things, the strong fluctuation in the rolling circumference, which is caused by the different dimensions of the mounted wheels (summer or winter tires) or by reduced tread depth.

The actual consumption is heavily dependent on the driving behavior of the driver and other environmental conditions such as weather, road conditions, etc. Contrary to some opinions, it is quite possible to undercut the standard consumption values ​​determined. Particularly large-volume engines in connection with manual transmissions are forced to unfavorable engine operating points in the NEDC.

According to an analysis by the International Council on Clean Transportation , real consumption in 2001 was 10% and in 2011 25% above the official manufacturer's figures. The Auto Club Europa achieved an average of 19.6% higher consumption in 2012.

Since the obligation to publish has led to comparability and has also influenced purchasing decisions , automobile manufacturers have tried to publish values ​​that are as good as possible. To this end, all measures are taken that have a positive effect on the result. In this context, manufacturers are accused of repeatedly using measures that are unrealistic or even contrary to standard specifications. These include, for example:

Compare by mode of transport

Means of transport can be better compared if consumption is related to transport work. Examples:

The utilization of the means of transport, and in the case of airplanes, the flight route also play a major role. The average consumption of the German fleet per person and 100 kilometers is now 3.64 liters. On flights of less than 800 km it was an average of 5.4 liters per 100 passenger kilometers. Capacity utilization also plays an important role in individual motorized traffic, which in Germany is predominantly carried out by cars. For example, of the 924 billion passenger kilometers traveled in Germany in 2008, only around 30 percent were passengers; with an average of just under 1.5 people in the car, the occupancy rate was only around 30 percent. In return, 44 billion liters of fuel were used, which equates to 4.8 liters per 100 passenger-kilometers.

A comparison made by the Austrian Federal Environment Agency in 2009 gave the following information:

The Bundesverband der Deutschen Luftverkehrswirtschaft eV made the following information for the aircraft in 2017: