This article covers the chemical process; for further meanings see under crack . 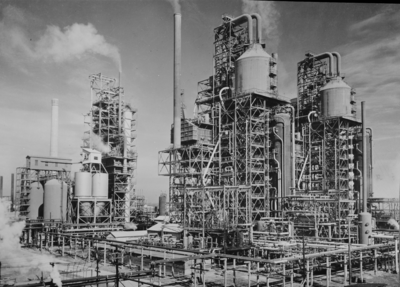 Octane is cracked in butane and butene (animation).

In thermal cracking, hydrocarbon fractions are heated under pressure to approx. 450 to 900 ° C (depending on the process). The long hydrocarbon molecules vibrate so strongly that the hydrocarbon chains break. Short-chain olefinic hydrocarbon molecules are formed, but also - through recombination - higher molecular weight paraffinic compounds as well as aromatics and - as an undesirable by-product - carbon (coke). In 1891 the Russian engineer Vladimir Schuchow and the Russian chemist Sergei Gawrilow were the first to develop an industrial plant for the thermal cracking of petroleum. In the USA, such a process was developed by William M. Burton at Standard Oil and patented in 1913.

In steam cracking , the naphtha (or fractions thereof) obtained in a refinery , which mainly consists of long-chain alkanes (C 5 -C 10 ), is split into short-chain olefins (alkenes) with the addition of steam . Ethane as well as propane and butane that occur in the production of natural gas are also used to produce olefins. In addition, even gas oil fractions and hydrocracker bottoms ( see: Hydrocracken ) are used as so-called alternative feedstocks. The steam cracker is used to produce raw materials that are mainly processed into plastics, paints, solvents or pesticides.

Visbreaking (for viscosity breaking , reduction of viscosity ) is mainly used to produce gas oil from residues from petroleum processing (mostly so-called vacuum residue , but also atmospheric residue from crude oil distillation ). A distinction is made between soaker visbreaking and coil visbreaking. The bitumen-like residue is first preheated to around 200 ° C and then heated in a heating furnace to around 450 ° C (soaker) or 490 ° C (coil). The actual cracking takes place in the downstream soaker (an elongated container several cubic meters in size). With coil visbreaking, there is no soaker, but the reaction temperatures are higher and thus compensate for the shorter dwell time.
The component mixture is separated by distillation behind the soaker / oven (atmospheric and then, if necessary, under vacuum). In addition to the desired main products (gases, naphtha, gas oil, heavy oil components), small amounts of coke are produced, which are deposited in layers on the furnace tubes, in the soaker and in the distillation columns. The system must therefore be shut down and "decoked" at intervals of several months.
A process similar to coil visbreaking is also suitable for cracking vacuum gas oil . Then - confusingly - it is referred to as a thermal cracker .

A typical schematic flow diagram of a delayed coker

When delayed coking (German: delayed Koksbilden) is, for the most violent thermal cracking process, an increase of visbreaking described above. High -quality products are produced from the bitumen-like residue from vacuum distillation in a refinery. This creates a similar product mixture of light (atmospherically distillable) hydrocarbons as in visbreaking. However, the yields of light hydrocarbons are considerably higher, and no liquid cracked residue is formed, but solid petroleum coke . The process consists of a furnace and subsequent coke chambers (English coke drums). The delayed has the following meaning: The formation of coke does not take place in the cracking furnace, but in the downstream coke chambers. Usually there are 2 coking chambers with a volume of 500 to 2000 m³, which are operated alternately. In the oven, the mixture is heated to temperatures of around 500 ° C at 20 to 30 bar. The hot mixture from the oven enters the active chamber, where the non-volatile residue is deposited, while lighter products can be drawn off in gaseous form. The residue is cracked by the hot gas flowing in until only petroleum coke remains. The out-of-service chamber is then cooled with steam and water. The hardened coke is cut from the inactive coke chamber with high water pressure of up to 300 bar. The volatile components are separated by distillation and fed to other parts of the refinery, while the coke can be sold as a valuable end product or is refined in a downstream calciner.

One on one Exxon - Patent produce BASED thermal cracking process of heaviest residue (visbroken vacuum residue u.ä) still valuable light hydrocarbons. However, the hydrocarbon mixtures are highly aromatic and highly olefinic (such as Light Coker Naphtha , LCN) and in most cases require additional hydrogen treatment. The process produces only very small amounts of coal dust, but a large amount of low-calorific gas that can easily be desulphurized and used as heating gas.

In the FCC, the heavy vacuum distillate of a refinery is split into gases, liquid gases , gasoline components, two gas oil fractions (LCO: Light Cycle Oil, HCO: Heavy Cycle Oil) and a residue fraction (slurry). The process was developed by the United States during World War II to increase the production of aviation fuel. All relevant components contain sulfur and nitrogen and are olefinic . The high olefin content is a great advantage for the gasoline components (high octane number ), while the remaining sulfur content is a disadvantage because of the stricter environmental regulations in Germany. The cleavage takes place at temperatures between 450 and 550 ° C and a reactor pressure of 1.4 bar with the aid of a zeolite catalyst (aluminum silicate). Since a considerable amount of coke is also formed in this process , continuous catalyst regeneration is necessary. The cracking process is therefore carried out in a fluidized bed reactor where the catalyst is withdrawn and burned off in a second reactor (regenerator) (i.e. the coke deposited on the catalyst is burned off). The regenerated catalyst is fed back into the process. The reactor product is processed in a system assigned to the process (distillation, Merox treatment, etc.). Some "modern" FCC systems can process atmospheric residue ( crude oil distillation ). Although considerably more coke is produced here, the profitability is possibly considerably better.

In contrast to FCC, hydrocracking avoids coke and olefin formation because hydrogen is fed into the process. Hydrocracking is a very popular process because a wide range of products is possible. However, this process is also very expensive since large amounts of hydrogen are required and the process is carried out at very high pressure. Since hydrogen can diffuse very easily through the reactor walls at high pressure, expensive special steels are required here. The catalyst used is of a bifunctional nature: metals (e.g. nickel) on aluminosilicates. The metals are responsible for the hydrogenation, the acidic aluminosilicates for the cracking.

The usual process conditions in the reactor are temperatures from 350 to 500 ° C. and pressures from 70 to 200  bar ; the residence time is a few minutes. Vacuum distillates are used. The products produced are gases, propane and butane ( LPG ), naphtha , kerosene , gas oil and so-called HCU bottoms (also: hydrowax ) as atmospheric residue . The chemical composition of these components is similar to the corresponding sections of crude oil processing (n- and iso- alkanes , cycloalkanes and - depending on the process control - small amounts of aromatics ). Further advantages are the very low nitrogen and sulfur content of the products as well as the sometimes high product quality (high cetane number of the gas oil fraction).

There are also hydrocracking processes ( H-Oil , Hycon ) for vacuum residues .