Propane is a colorless flammable gas and belongs to the hydrocarbons . It is in third place in the homologous series of alkanes .

Propane crystallizes in space group P 2 1 / n (space group no. 14, position 2) . The packing of the molecules is rather bad, the space filling at 90 K is only 58.55%. This is the reason why the melting point is lower than that of all other alkanes . Template: room group / 14.2

Propane is heavier than air and has a narcotic to asphyxiating effect in high concentrations .

Propane is a naturally occurring gas . It is created together with other hydrocarbons such as petroleum and butane through the decomposition and reaction of organic substances over long periods of time. Propane is released from oil fields by separating it from other hydrocarbons and refining it for commercial use.

Both processes begin when underground oil fields are developed by drilling oil wells. The hydrocarbon mixture is directed from the well into a gas trap that separates the stream into crude oil and gas, which includes petroleum , liquefied petroleum gases, and natural gas . The mixture of liquefied gases can be used as a mixture or further separated into its three parts butane , isobutane and propane.

Industrial propane is in the promotion of natural gas as a by-product recovered and in a petroleum refinery in the cracking of petroleum produced.

In the laboratory , propane can be synthesized by adding hydrogen to propene :

So that the addition reaction can take place, z. B. platinum or palladium catalysts are used. 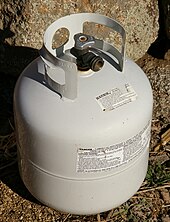 Consumption is increasing rapidly in non-industrialized areas of the world. Propane has replaced many older traditional energy sources .

Propane is used as a liquid gas for combustion and heating purposes, e.g. B. as autogas (LPG) to drive vehicles , in the firing of hot air balloons , in gas stoves and gas boilers, in gas grills , for soldering and welding equipment , gas rechauds or lighters . Usually it is mixed with butane , e.g. B. 40% propane and 60% butane.

Among the industries that use propane include glass manufacturer , brick factories , poultry farms and other industries, the portable heat need. In rural areas , it is used to heat livestock, in grain dryers and other heat generating devices. If it for heating or drying of grain is used, it is usually in a large, fixed gas tank kept, which is replenished from a propane-vans.

As a refrigerant , it has the designation R-290 and is used in cooling devices and heat pumps . In Australia, propane is already in more than one million car - air conditioners used. Propane has a low global warming potential (3.3 times the same amount of carbon dioxide ), no ozone depletion potential and can act as a substitute for R-12 , R-22 , R-134a and other chlorofluorocarbons . However, old systems must not simply be filled with propane, as it is flammable . Separate safety regulations must be met for propane systems.

Propane is a possible component of the propellant gas in spray cans ( food additive E 944) and airsofts . It is used on a large scale for the production of ethene and propene .

Propane is liquefied under pressure and stored in gas cylinders or tanks made of metal or composite materials. The internal cylinder pressure is determined exclusively by the vapor pressure of the connection and is only dependent on the ambient temperature. It is therefore not determined by the filling level of the pressurized gas cylinder and is, for example, 4.7 bar at 0 ° C, 8.4 bar at 20 ° C and 17.1 bar at 50 ° C. The internal pressure drops (as with all liquid gases stored under pressure) only when all liquid propane has evaporated.

It is also stored in underground caverns . Storage is preferably done in the low-consumption months in order to be able to cover consumption peaks in winter.