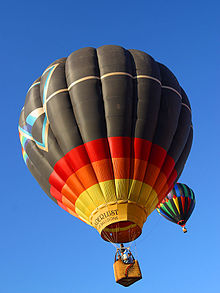 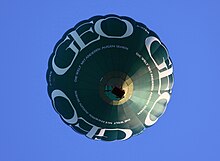 A hot air balloon is an aircraft that uses the static buoyancy of hot air inside. A large amount of air is heated in the balloon envelope . This causes the air to expand, which reduces its specific weight . The balloon takes off when the buoyancy of the heated air volume corresponds to the weight of the envelope, basket and payload . The hot air balloon has no carrying structure - the basket hangs (via ropes) on the cover or this is spanned by ropes from which the basket hangs.

Differentiation from other aircraft

A hot air balloon consists of:

A fan is required for assembly. Most of the parts are loaded into a transport trailer that is pulled by the pursuit vehicle. 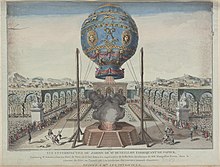 After the much older fettered kites , some of which were also manned, the hot air balloon is the oldest aircraft. However, small, unmanned hot air balloons, the so-called Kong Ming lanterns , were already used in China .

The observation that smoke and hot air rise upwards led to repeated experiments with heated air. According to contemporary reports, the Jesuit priest Bartolomeu de Gusmão demonstrated some balloon models at the Portuguese court and asked King John V for a patent. Brothers Joseph Michel and Jacques Etienne Montgolfier , who are therefore considered to be the inventors of the hot air balloon, made the move from more playful models to practical aircraft .

Their first balloon flight took place on June 4 or 5, 1783, people were not on board. The second trip took place on September 19th in Versailles . But because they didn't really trust the thing and didn't know anything about the “sea of ​​air”, they preferred to carry three animals instead of people, namely a rooster, a duck and a mutton. Hot air balloons were also named Montgolfièren after their inventors .

The first balloonists in human history were Jean-François Pilâtre de Rozier and the guard officer François d'Arlandes , who rose in a hot air balloon from the garden of La Muette Castle near Paris on November 21, 1783 . The first known balloon flight outside France was undertaken by Don Paolo Andreani and the brothers Agostino and Carlo Gerli on February 25, 1784 near Milan .

Before that, Ulrich Schiegg experimented with hot air balloons under the influence of the Montgolfier brothers' experiments and was able to carry out Germany's first (unmanned) balloon launch on January 22, 1784 in the Ottobeuren monastery .

In 1979 two Thuringian families managed to " escape " from the GDR to the Federal Republic with a self-made hot air balloon .

On November 26, 2005, Indian millionaire Vijaypat Singhania made a journey to a height of 69,852 feet (over 21 kilometers) . It started in Mumbai , landing was the city of Sinnar in the state of Maharashtra . 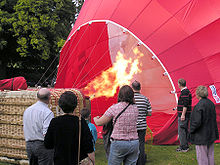 The air in the balloon is heated by the burner 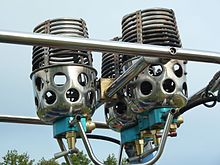 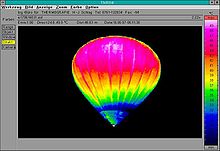 Thermography of a hot air balloon in flight. The shell is heated by the air inside. The balloon is hottest at the top.

Under normal conditions at 0 ° C at sea level, one cubic meter of air has a mass of around 1.3 kg. At constant pressure, the density of gases decreases with increasing temperature according to Gay-Lussac's law . The difference in density between the colder outside air and the warmer air in the balloon creates a buoyancy force . This counteracts the force of gravity (the weight) of the hot air balloon. The weight of the hot air balloon is made up of the weight of the balloon envelope plus the weight of the payload attached to it (basket with burner, gas containers and occupants).

For a first rough estimate of the load capacity of a balloon, it can be viewed as a sphere. Since the volume of a sphere (and thus the buoyancy of the balloon) increases with the third, the surface area (and thus the weight of the envelope) only increases with the second power of the diameter, a larger balloon can carry a larger payload. More refined considerations include the fact that the larger the balloon diameter, heavier torches and firmer envelopes are required.

Common sizes are 3,000 to 10,000 cubic meters. The temperature inside a hot air balloon is between 70 and 125 ° C during a balloon ride, depending on the type of fabric, load and outside temperature. Since the buoyancy increases with the increasing difference in density between the inner air and the ambient air, a hot air balloon has a greater maximum load capacity in deeper air layers with higher air pressure and at colder outside temperatures. The shell gives off heat to the outside air that is slowly sweeping up it; In addition, it radiates heat all around, while solar radiation can heat from one side.

The take-off and landing of a hot air balloon are easily affected by wind. Due to the large attack surface of the balloon envelope, potentially large forces occur. When the buoyancy is already high but not sufficient to lift the balloon completely, the gondola is literally dragged across the ground. This can endanger the occupants of the gondola if there are obstacles. Balloon rides are therefore only started when there is no wind or weak wind on the ground.

Apart from the wind speed during take-off and landing, ballooning also depends on the fact that no strong thermals have built up in the air . Since the balloon envelope is open at the bottom, thermal gusts could compress it and force the hot air out downwards. The balloon then loses some of its buoyancy. As a result, it begins to sink quickly. This creates additional airflow from below, which further compresses the envelope and forces more hot air out. This can lead to a self-accelerating crash that cannot be stopped even by the maximum heat input from the burner. Lateral gusts, such as those that occur when passing through a meteorological front , can also deform the balloon and force out hot air.

Even less strong thermals are generally associated with rising and falling air masses. This leads to the need for more heating in order to maintain the desired altitude. With the same amount of gas, a hot air balloon can therefore stay in the air longer without thermals.

Pile clouds are a sure sign of thermals or the passage of a cold front . Massive nimbostratus clouds occur when a warm front passes through . With low-lying layer clouds , the air is usually calm, but visibility is lacking. High-lying cirrus clouds , on the other hand, are not a sign of choppy air. That is why balloon rides are preferred when the weather is calm and the sky is largely cloudless.

In summer, the sun heats the ground during the day. The rising warm air from the ground creates thermals, which intensify until the early afternoon and then decrease again as the position of the sun sinks. The morning and evening hours are therefore often particularly suitable for a safe balloon flight. 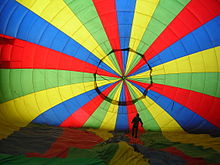 It is not possible to control a balloon directly. In order to influence the direction and speed of travel, the different wind directions and speeds at different heights are used. By deliberately rising or falling, winds can be exploited to approach a desired target.

A balloon can be rotated around its vertical axis by means of a tangential air outlet through air slots near the balloon equator, which are also called "rotary valves" and are operated by a cable pull from the balloon basket, for example to align the basket for landing or to give the pilot a clear view of the direction of travel to grant.

Ballooning is not just a leisure activity, there are also competitions up to the world championship. In the competitions, several balloon rides are carried out, in which usually several tasks have to be solved in the best possible way. A well-known balloon competition is the Montgolfiade .

Other types of tasks are, for example, long journeys within a limited evaluation area (“Maximum Distance”) or the “Minimum Distance” with “time specification”, in which the pilot wins who has covered the shortest distance after a specified minimum journey time. In the “fox hunt”, a balloon, which is usually marked with a flag, starts with a certain time advantage and places a target cross for the following balloons at the landing location, where the following balloonists have to land as close as possible.

The competition management is supported by referees ("observers"). Each pilot and his team are assigned an observer per trip. The observers measure the markers and observe whether everything went according to the FAI rules during the journey .

Balloons of 1,600–2,600 m³ are called competition balloons or racers . They are therefore smaller than the usual balloons with which one can also take part in competitions. Racers are also much slimmer and can climb or sink much faster without creating a parachute effect through the shell.