The Château de la Muette ( French Château de la Muette ) was a castle , which served nearly two centuries as a residence of the French royal family. Until the 1850s, it was located in the middle of extensive parkland between the original Paris suburb of Passy (in the east) and the Bois de Boulogne (in the west). After Passy was incorporated into Paris in 1860, an entire district was named Muette . The castle was completely demolished in 1920 and rebuilt in 1921/22 elsewhere within the 16th arrondissement of Paris . The new building has housed the headquarters of the OECD or its legal predecessor OEEC since 1949 . 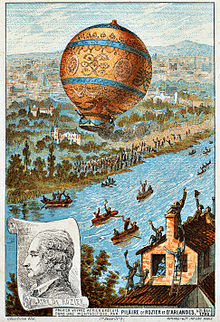 Depiction of the first manned balloon flight on November 21, 1783 from the end of the 19th century.

The knight king Francis I had a hunting lodge built on the edge of the Bois de Boulogne in the 1540s, which was named La Meute . This was in 1572 on the order of Charles IX. converted into a small castle. He bequeathed this to his sister Margaret of Valois , who became Queen of France through her marriage to Henry IV in the same year .

On November 21, 1783, the garden of the castle was the starting point for the first manned balloon flight from Rozier and d'Arlandes , which led across the Seine about 10 km to the Butte aux Cailles in the municipality of Gentilly .

Due to its increasingly in need of renovation, the palace has not been inhabited by the royal family since 1787. The attempt to sell it to a private investor failed because the purchase price was obviously too high. The property remained in the possession of the royal family until it was expropriated in 1792 during the French Revolution .

With the construction of the Passy- Auteuil railway line in 1854, the spacious park was cut up and the land was divided into small parcels, on which a new villa district was created.

Around 1920 the remaining estate was acquired by Henri de Rothschild , who had a new building erected in 1921/22, which is also called "La Muette Castle". In 1949 the property was sold to the OECD legal predecessor OEEC (Organization for European Economic Cooperation), which has had its headquarters there ever since.