Pilâtre is a redirect to this article. For the lunar crater see Pilâtre (moon crater) . 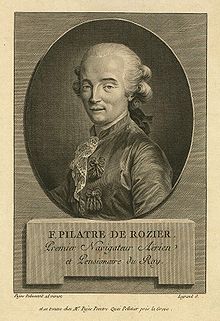 Jean-François Pilâtre de Rozier (born March 30, 1754 in Metz , † June 15, 1785 in Wimereux , Département Pas-de-Calais ) was a French physicist , the first aviation pioneer and, together with Pierre Romain, the first fatality in aviation history.

Jean-François Pilâtre de Rozier was born in Metz as the third son of Magdeleine Wilmard and Mathurin Pilastre. His father, who was nicknamed "du Rosier", was a former soldier who had become a landlord. In the military hospital of his hometown of Metz, an important garrison on the French border, Pilâtres became interested in the chemistry of drugs . At the age of eighteen he went to Paris, worked as a pharmacist and also attended lectures on mathematics, physics and natural history. He then taught physics and chemistry at the Academy in Reims , which attracted the attention of the Count of Provence , who later became Louis XVIII. and brother of King Louis XVI.

Pilâtre returned to Paris, where he was entrusted with the Count's natural history cabinet of curiosities . He also became a courtier of the count's wife, which earned him the nobility name "Pilâtre de Rozier". He opened his own museum, the Musée technique , in the Marais district of Paris on December 11, 1781 , where he carried out physical experiments and demonstrated demonstrations to his noble visitors. He researched the new field of gases and invented a ventilator (respirator).

On October 15, 1783, the then 29-year-old physicist with a royal permit managed to ride in a Montgolfière , a hot-air balloon made by the Montgolfier brothers , in which he reached a height of about 26 meters. With this he succeeded in the first historically secured manned flight of mankind, but the balloon was still anchored to the ground with ropes.

On November 21, 1783, Pilâtre carried out the first free balloon flight in human history. During the 25-minute drive he floated together with François d'Arlandes after starting from the castle garden of the castle La Muette in Passy , today a district of Paris , across the Seine about 10 km to the Butte aux Cailles in the municipality of Gentilly , a few kilometers from the center of the French capital (today part of its 13th arrondissement ). He reported on this air journey in the publication Première expérience de la Montgolfière (1784).

He developed the Rozière named after him , a combination of hydrogen balloon and hot air balloon. On June 15, 1785, he took off from Boulogne-sur-Mer in the direction of Great Britain with such a hot-air-gas hybrid balloon . After driving 5 km, the hydrogen ignited at a height of 900 meters and destroyed the balloon envelope, whereupon the gondola fell into the depths. Pilâtre de Rozier and his passenger, Pierre Romain, were killed in the crash. They were the first to die in aviation.

The Pilâtre lunar crater was named after him in 1991. He is also the namesake for the Rozier Glacier in Antarctica.