This article describes the French commune of Boulogne-sur-Mer . In Argentina there is a city of the same name with the spelling Boulogne Sur Mer .

Boulogne-sur-Mer ( NDL. Bonen or Beunen ) is a French municipality with 40,874 inhabitants (at January 1, 2017) in the Pas-de-Calais (62) in the region of Hauts-de-France . It is a sub-prefecture of the arrondissement of the same name .

The northern French port city lies on the Côte d'Opale at the point where the Liane River flows into the English Channel .

The winters are mild due to the maritime climate and the Gulf Stream . The summer months are relatively dry. 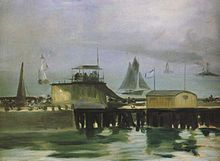 The Celtic name of the port was Gesoriacum ; the Romans called it Portus Itius or Portus Britannicus . The higher city, newly founded by the Romans, was baptized Bononia in memory of Bologna . Due to the strategic importance of the port for the conquest of Great Britain, Caligula had a lighthouse built in Boulogne-sur-Mer based on the model of Pharos in Egypt . This was further improved under Charlemagne in 811, but collapsed due to a landslide in 1644. The ruins of the lighthouse could still be seen until 1930.

From the 4th century onwards, the entire city was known solely as Bononia in the Roman Empire . It served as the main port for the Classis Britannica and as a connection between Britain and the mainland. Julius Caesar and Claudius used the city as a base for the Roman invasion of Britain. Several Roman roads led to Boulogne, including a connection via Bavay to Cologne , which is now called Via Belgica .

In the Middle Ages, Boulogne was the center of the county of the same name . A member of the Graf family of Boulogne Baldwin of Boulogne (Baudouin de Boulogne) , brother of Godfrey of Bouillon (Godefroy de Bouillon) , was at the time of the Crusades under the name of Baldwin I , the first king of the Kingdom of Jerusalem . Boulogne-sur-Mer gained real importance after Baldwin II , Count of Flanders , had a castle built in 918, which his descendants converted into a castle in the 13th century, which now houses a historical museum. The Flemish name Boonen also comes from the time of Baldwin II .

The Marian pilgrimage in Boulogne-sur-Mer was so successful that the French King Philip V ordered the construction of a similar church near Paris in Menus-lès-Saint-Cloud in order to shorten the journey for the inhabitants of Paris . In 1330 the church was completed and the town was called Boulogne-la-Petite, now Boulogne-Billancourt .

The English King Henry VIII , who was allied with the Roman-German Emperor Charles V , attacked northern France in the 4th Italian War during the reign of King Francis I , and the English occupied Boulogne in 1544 after a brief siege . After the capture, the French in turn besieged the city until Boulogne finally became French in 1550.

An attack on French ships at Boulogne-sur-Mer, led by the British under Horatio Nelson , remained on the 15th and 16th. August 1801 inconclusive. On October 22, 1801, an armistice was negotiated between Great Britain and France. Napoleon prepared an invasion in 1804 . He gathered an army of 150,000 men on the Channel coast near Boulogne. In order to be able to carry out the crossing, numerous transport ships were built. In August 1805, however, the Boulogne camp was demolished because of the opening of war by Austria and the French army was forced to march to the Danube.

On August 17, 1850, the South American freedom fighter José de San Martín died in Boulogne-sur-Mer. For this reason, a village about 15 km north of Buenos Aires (now part of the big city) and a street in Buenos Aires was named after the French city.

In 1905 the first World Esperanto Congress was held in the city . To mark the centenary of this event, in 2005 Boulogne2005 took place again in Boulogne-sur-Mer.

On July 29, 1939, the Boulogne Alprech airfield, 4 km south of Boulogne, was opened. At the beginning of the German Wehrmacht's western campaign , French naval aviators were lying there . During the German occupation of France, Boulogne was a base of the Wehrmacht . Later and even after the end of the war, the square was no longer used; the slope was too small and too close to the city. A little further south is the Aérodrome de Le Portel today.

Between June 1940 and June 1942 there was a seaplane base of the Luftwaffe Sea Emergency Squadron 3 in the Westhafen , which was equipped with various types of flying boats and seaplanes. In August / September 1940, part of the 1st squadron of Airborne Flying Group 196 with their Arado Ar 196 was also here .

The Marine Artillery Department 240 was stationed in Boulogne-sur-Mer during the entire period of occupation for coastal defense.

Boulogne-sur-Mer is the largest fishing port in France. On the beach you can visit a sea aquarium, the Nausicaä . This depicts the fauna of the high seas . In Wimille , about 3–4 km north of the city, the Colonne de la Grande Armée built in 1804 commemorates the invasion of England planned by Napoléon I. There the Order of the Legion of Honor was awarded for the first time .

Since 1963 there was a friendship between cities with Stralsund , which is no longer cultivated.

The city is also a member of the Federation of European Napoleonic Cities .

Communes in the arrondissement of Boulogne-sur-Mer