The title of this article is ambiguous. See also: Département Seine and the two Seine rivers .

The Seine ([ sɛn ]; Seine ? / I in French ; Latin / Celtic Sequana ) is a river in northern France . It rises in the Bourgogne-Franche-Comté region , flows from east to west and flows into the English Channel at Le Havre . With a length of 777 kilometers, it is one of the longest rivers in France alongside the Loire (1004 kilometers) and the merging rivers of Doubs , Saône and Rhône (a total of 1025 kilometers) . The catchment area of ​​the Seine covers around 78,650  km² .

Important cities on the Seine are Paris , Troyes and Rouen . The main inland ports in France are located in Paris and Rouen. The Seine is connected to the Scheldt , Meuse , Rhine , Saône and Loire via canals . On the lower reaches of the river in the Normandy area, unusually large loops have formed for a river of this type . The navigable length (to Nogent-sur-Seine ) is 560 km. Seagoing ships can sail the river as far as Rouen (120 km inland).

The banks of the Seine in Paris are on the UNESCO World Heritage List .

Sources of the Seine

Artificial spring grotto of the Seine

The source of the Seine is located on the Langres plateau , 25 km northwest of Dijon in the Côte-d'Or department in the Bourgogne-Franche-Comté region , 470  m above sea level. A special feature is that the sources of the Seine have been the property of the city of Paris since 1864. An artificial grotto was built a year later to protect the main spring and a statue of a nymph was placed to symbolize the river. The capital has meanwhile lost interest in the plot and returned it to the region. Near the source are the remains of a Gallo-Roman temple in which a Dea Sequana ( Latin goddess of the Seine ) was worshiped and whose archaeological finds are now in the Archaeological Museum of Dijon.

The valley of the Seine

Its at Caudebec-en-Caux , about 25 km before the start of the estuary

The Seine flows along its entire length through the layered stepland of the Paris basin , the relief of which is characterized by broad-based high waves like in the dry Champagne and some more prominent hills. The narrow valley of the upper reaches of the Langres plateau in the Troyes area is followed by an approximately one kilometer wide valley floor between very gentle slopes. Further west to the mouth of the Voulzie near Bray-sur-Seine , the valley floor widens to over 5 km, and finally the slopes become steeper, at least on the north side. The surrounding heights are here on the north side about 100 m, on the south side about 50 m above the river. At Fontainebleau , whose city center lies in a side valley, there is a narrow valley, and the Seine valley crosses a ridge in the form of a gate . Near Paris and from there to just before the mouth, the valley runs in numerous loops and accordingly asymmetrical valley sections with sliding slope and impact slope . The width of the valley floor varies greatly and is small over long stretches. The cross-section is even asymmetrical at the Île de la Cité in Paris, where the course of the river is almost straight: South of the river, the Latin Quarter does not rise steeply, but it rises significantly, while the flat Marais ("swamp") extends over several from the north bank Kilometers to almost the Gare du Nord . From Paris to shortly before the mouth, the valley does not become flatter, the valley floor necessarily sinks from about 50 m above sea level to almost zero, but the hills remain almost the same height.

The Seine valley is known for its numerous castles (“ Seine castles ”), but also for the automotive industry, petrochemicals and several power plants that exist there.

Islands in the Seine

View from the Seine to the Île des Impressionnistes

Above the greater Paris area:

Below the greater Paris area

Cities on the Seine

- in brackets the number of inhabitants, medium- sized cities in italics , large cities in bold -

Above the greater Paris area: 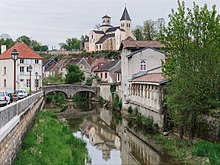 The Seine near La Défense

Below the greater Paris area:

Map of the Seine estuary around 1875

Three large bridges span the wide river valley in the estuary: the Brotonne Bridge , the Bridge of Tancarville and the Pont de Normandie . The latter was at times the longest bridge in Europe. The Seine flows between Le Havre and Honfleur and forms a long estuary from Tancarville . This is spanned by the Pont de Normandie. In 1997, an area of ​​8,528 hectares was placed under nature protection. Reed areas, dunes, sandbanks and wet meadows provide habitat for over 250 different bird species. An information center at the northern bridgehead offers natural history about the nature reserve and an observation station.

Just looking at the map shows that the Seine river system is characterized by a number of long first-degree tributaries that flow parallel to the Seine at a great distance, but sometimes arise not very far from it. The tributaries of the tributaries often run quite a long distance parallel to their target water before they make an arc to it. The length comparisons in the table make it clear that the source of the Marne has the longest stretch of river to the sea. The flow paths to the Seine estuary from the sources of the Aube , the Yonne and some of their tributaries, as well as the Aire and the Aisne, are hardly shorter than that of the Seine itself.

River system of the Seine

Surface water of the Seine is used for the Parisian water supply . After its purification, the wastewater from the greater Paris area is fed to the Seine and flows into the English Channel via Rouen and Le Havre. The Seine is brown in winter as it passes agricultural areas for 400 km . In summer it is colored green by algae. Until the middle of the 19th century, the Parisian sewage was discharged untreated into the river. From around 1850 onwards, they were taken out of the city in sewers and led down into the river. After that, people switched to not directing the wastewater directly into the Seine, but using it to fertilize fields . Sewage treatment plants were built from the middle of the 20th century. Compared to 1850, when the Seine was a stinking sewer, the water quality has improved significantly. Today, 35 species of fish live in the Seine again, including salmon and trout .

The oldest surviving flood of the Seine in the Paris Basin occurred in the winter of 358 during the stay of the Roman Emperor Julian in Lutetia and was mentioned in his Misopogon . The description of the flood of February 582 was handed down to Gregory of Tours (Grégoire) in the Historia Francorum .

After severe winters in 1197, 1325/26, 1708/09 the water masses tore away bridges in Paris and plague epidemics broke out. The last severe flooding occurred in January 1910 , when twelve of the 20 arrondissements in Paris were flooded for six weeks.

Ice drift on the Seine in Paris: the Quai Saint-Michel in January 1880.

The following list of floods in Paris does not claim to be exhaustive.

The Seine in art 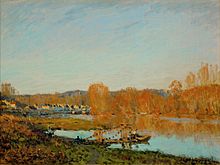 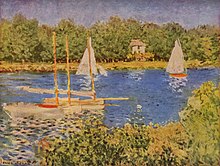 François Beaudouin was the founder of the Musée de la batellerie in Conflans-Sainte-Honorine and was the curator there until 1994.

Competition venues for the 1900 Summer Olympics

Competition venues for the 1924 Summer Olympics