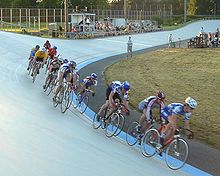 The German youth champion on the street from 2009, Lisa Küllmer , at the standing start of a track race

The track cycling includes cycling , on a Radrennbahn be exercised. It has been part of the Summer Olympics program since its inception . The track is driven counter-clockwise.

The UCI has precisely defined the technical characteristics of track bikes . Only what is technically necessary should be permitted. Above all, they have to be designed for the special forces (e.g. acceleration, changes in direction and centrifugal forces in curves). For this reason, weight is not as important as stability. In order to reduce the risk of falling at the high speed and tight conditions on the track, the track bikes have neither freewheel nor brakes, the so-called rigid gear is mandatory.

In order not to collide with another driver, the driver takes some pressure off the pedal (without countering) and moves - especially to the right / upwards. Due to the level crossing and the resulting further path, the distance to the vehicle in front increases immediately. In an emergency, the speed can also be increased by countering, i. H. Counter-holding with muscle power against the rotating pedal. Another reason for the lack of freewheel is the stabilization of the bike and safety. If a driver keeps pedaling, he can carry out steering maneuvers in a more controlled manner. In order to prevent the pedals from hitting the track during certain steering maneuvers, the bottom bracket of the track bikes is moved upwards by around two to four centimeters compared to road racing bikes.

In track cycling, a distinction is essentially made between short-term and endurance disciplines.

Start of a keirin race in Tokyo

The Omnium is an eventing competition that originally consisted of short-term and endurance disciplines and has been an endurance all-round competition since the end of 2016.

The record attempts for the hourly world record are also carried out on the track. It is an attempt to drive as long as possible alone within an hour without a slipstream. After a lot of experimentation with aerodynamic wheels and seating positions, the UCI has canceled the records since Eddy Merckx's record drive and prescribed wheels that are largely identical to the one used at the time.