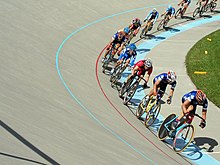 When cycling , Swiss also Velosport is called sports , with the bike to run.

These include road cycling with the road bicycle racing , the cycling marathon , the cycling and the Jedermannrennen to continue the track cycling , mountain biking , cyclocross , Trial (driving skills) , BMX , mountain bike orienteering , the unicycle and the indoor cycling kinds artistic cycling , cycle ball and bicycle polo . Spinning or indoor cycling has developed as a form of training and independent fitness training .

The early types of bicycles before the development of today's low-level bike - that is, the walking machine often called the draisine in the 1820s and above all the high bike of the 1870s and 1880s - were shaped by the fact that the bicycle was not a utility vehicle, but rather as a sport and Fun device was used. High cyclists were considered brave gamblers and accordingly attracted a lot of attention with adventure tours since the 1870s . The American Thomas Stevens is said to have succeeded in cycling around the world on two wheels from 1884 to 1886.

In Germany, the Eimsbüttel Velocipede Club was launched on April 17, 1869, the first cycling club in Altona / Elbe . Already on September 10th, during an industrial exhibition in the same year, the bicycle fans held a first race with participants from France, Denmark and England.

The public's interest soon shifted from adventure drives, which were more like voyages of discovery than sport, to record drives in which individual racing drivers drive a certain long distance (e.g. the greatest possible distance on the British Isles from Cornwall to northern Scotland of 1,400 km) in the shortest possible time had. This enabled skeptical contemporaries to demonstrate the superiority of the bicycle over all other individual means of transport from the turn of the 20th century.

On December 8, 1867, the world's first one-day race took place in Paris. Around 100 participants gathered on the Avenue des Champs-Élysées and started for the Palace of Versailles, around 23 km away .

The first women's cycling race was held in Bordeaux on November 1, 1868. The scene of the event was the Parc Bordelais. Four women completed a race on a 500 meter long track.

The first road race is said to have taken place in Amiens (France) as early as 1865. Many of the races initiated at that time are still “ classics ” today, such as the “spring classics ” Liège – Bastogne – Liège (since 1892), Paris – Roubaix (since 1896) or Milan-San Remo (since 1907). Since the first Olympic Summer Games in 1896 , road and track cycling have been part of the Olympic disciplines . A hundred years later, in 1996 , the mountain bike race started and in 2008 the BMX race was added.

Especially from the 1890s onwards, distance races attracted increasing attention from the public, in which a large number of competing racing drivers had to cover distances of almost always more than 500 km.

Finally, in 1903, the Tour de France was launched as the first stage race , in which the length of the course was similar to that of the distance races - in this case, however, on several consecutive days. At that time 2,428 km were completed in six stages, the average of the winner was a remarkable 26 km / h.

Cyclists having a massage before the endurance race (Berlin 1906)

In addition to road races, cycling events on the track, such as six-day races and standing races, were extremely popular even in the early days of cycling.

An important aspect of cycling is the fact that the first systematic sponsorship in modern sport was practiced here: From the very beginning, all types of cycling were supported and influenced by bicycle companies, because the performance of the bicycle as a product, which was initially often doubted, and later on of the various makes in particular could be excellently illustrated. As early as the 1910s, the professional cyclists in the Tour de France did not compete in national teams, but, as they do now, in company teams. This illustrates the completely different development than in decades of amateur sports such as gymnastics , football or athletics .

In general, from the turn of the 20th century to the First World War, cycling is considered by historians to be perhaps the most important and most popular spectator sport alongside boxing .

Cycling as a health sport

Since the body weight is supported by the saddle and the weight load on the joints is lower than with jogging or Nordic walking , cycling is considered a sensible health sport in all age groups. Even if there is a certain risk of accidents, the health-promoting aspects predominate. With a corresponding increase in performance in health sports , the principles of periodization of sports training must be taken into account. These were used by Arnd Krüger as part of the Sattelfest program . Even regular cycling to work has long-term health benefits, as has been proven in Sweden in a long-term study (10 years) on over 23,000 people.