Salmon are different medium-sized fish of the genera Salmo , Salmothymus and Oncorhynchus from the family of salmon fish (Salmonidae) within the order of the salmon-like . The Atlantic salmon ( Salmo salar ) and the Pacific salmon ( Oncorhynchus ) migrate into the sea and come back to the fresh waters to spawn ( anadromous migratory fish ), where they swim up to their spawning grounds in the upper reaches of the rivers and obstacles such as lower waterfalls and weirs , etc. . U. also over fishways , overcome. During their migration from salt water to fresh water, they also have to adapt physiologically to the different salt concentrations. Corresponding conversion processes - i.e. changes or, more precisely, getting used to it, as well as adaptations , in English usage called smoltification (also borrowed "[the] smoltification " and further borrowed "[the] smoltification ") - are also necessary for the young fish if they do Leaving fresh water and migrating into the sea. The is Osmoregulation a decisive factor.

Salmon for human consumption come widely from Norwegian or Chilean aquaculture or as wild-caught salmon from Alaska.

The fish marketed as pollock and Alaska pollock ( coalfish or Pacific pollack ), on the other hand, belong to the cod .

Salmon are already mentioned in Pliny the Elder . There were also many schools of salmon in the rivers in Europe . The Rhine in particular was seen as a river with numerous salmon fish. When industry settled on the banks of the river in the 19th century, hydropower plants blocked the rivers and the water quality deteriorated more and more due to heavy pollution, the salmon gradually disappeared.

In Alaska and Canada , the Pacific salmon population was severely decimated from around 1900 onwards by overfishing using traps that blocked entire rivers and by hydropower plants. A major spawning site in the Pacific Northwest is the Columbia River in Oregon and Washington.

Today fish ladders for salmon are attached to many weirs and only controlled fishing is allowed. One reaction to this restriction is the establishment of salmon farms (see also aquaculture ), which, however, cause problematic pollution of the seawater used.

The salmon died out in Germany in the 1950s. The Salmon 2000 campaign resulted in a successful reintroduction in the Upper Rhine in 1983 , which was crowned in 1997 with the first return of young salmon. The salmon catch on the Upper Rhine was and is operated with a fishing gallows.

In Switzerland, the previously numerous salmon disappeared from the rivers in the 1960s. As a result of the successful reintroduction of salmon on the Rhine, the return of salmon is also expected in Switzerland. In October 2008, a salmon was caught in Basel for the first time in Switzerland.

Due to their regular migrations to the spawning grounds in the rivers, they represent a reliable food source for over 200 animal species. The forests of Alaska are also dependent on these fish: Around 80% of their nitrogen supply comes from the adult salmon that have died after spawning in their waters (and thus from the sea).

The breeding of salmon is done, given the close relationship essentially the same methods as the breeding of trout . Parents that are ripe for spawning are grazed, the sex products obtained in this way are carefully mixed and the fertilized eggs are kept in Zuger glasses or hatching basins with running fresh water. The broodlings are raised on dry food and kept in basins or ponds until the age at which they adapt to life in seawater. The fish are then usually kept in net cages in fjords or off the coast and fattened with dry food until they are ready for slaughter.

Norway is the largest producer of farmed salmon, followed by Chile. Salmon farming has also met with severe criticism. On the one hand, wild fish is caught and fed to farmed salmon, and on the other hand, salmon repeatedly manage to break out of the net cages. They then compete with the wild salmon and displace them, but above all they do not migrate to their spawning areas, so that the rivers through which they migrate and the biotopes there are completely changed if the salmon do not appear. For example, the bears of British Columbia are dependent on the salmon trains, just as the cultures of the Indian coastal inhabitants are inconceivable without salmon. Furthermore, sea lions and other predators get caught in the nets and suffocate. In Chile, which is located in the southern hemisphere, where salmon are not at all native, they lose their sense of direction due to the reverse course of the sun and do not find their way back into fresh water.

Farmed salmon are also very susceptible to diseases and parasites, such as the salmon louse. One reason for the susceptibility is the large amount of excrement of the salmon which pollutes the water and the seabed. Because of this, antibiotics have to be used again and again.

In 2017, 4.5 tonnes of transgenic Atlantic salmon were sold in Canada as the first genetically modified animal intended for human consumption. The GM salmon with the brand name AquAdvantage have a gene for a growth hormone from another salmon species (king salmon) and another gene from the fish species Zoarces americanus, which is adapted to cold sea regions . With these two genes, GM salmon produce more growth hormones. Instead of three years, it is ready for slaughter after 16 to 18 months. The application was made in the USA in 1995 and the safety tests required by the FDA were passed (according to the FDA, GM salmon are just as safe as other salmon). Among other things, it had to be ensured that the genetic modifications remain stable and do not have any negative effects on animal health. All animals are also female and sterile and should be kept in closed tanks so that undesired outcrossing is not possible.

The US Food and Drug Administration (FDA) approved a genetically modified animal as a food for the first time on November 19, 2015 . The edible fish with the name AquAdvantage Salmon is bred by the US company AquaBounty Technologies . The transgenic salmon are fully grown within 16 to 18 months. Without a genetic change, this takes 30 months for Atlantic salmon . The US company operates breeding stations in Canada and Panama. 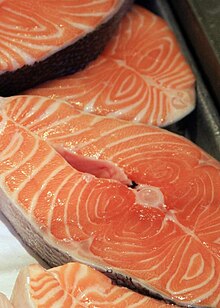 Ready-to-cook salmon, cut as a steak

Salmon is one of the most valued food fish today . Its orange-pink to dark red meat is rich in omega-3 fatty acids . It can be eaten raw, boiled, fried and smoked . Its translucent orange roe is marketed as " salmon caviar " or " keta caviar ", preferably from the ketal salmon ( Oncorhynchus keta ), one of the five Pacific salmon species.

Salmon was an expensive species of fish until the 20th century. In the 17th century, the number of salmon caught increased repeatedly and the price fluctuated accordingly. This is how the completely absurd but widely spread legends arose, according to which servants should have protested against being fed too often salmon by their employer, or even official or legal regulations existed with regard to this. Despite extensive research, no evidence has been found. In German usage, Salm referred to the fish swimming upriver with reddish and more fragrant meat, of which culturally historically house names, e.g. B. in Basel "Zum Roten Salmen" or "Zum Kleinen Salmen", or street names such as the Spayer "Salmgasse", bear witness. Since the beginning of the 20th century, the situation began to change - due to overfishing, water pollution and the construction of artificial water structures that made it difficult or sometimes impossible for the salmon to migrate to the spawning grounds, salmon was scarce and increasingly regarded as a delicacy.

Baltic salmon, a subspecies of the Atlantic salmon, has a significantly lighter color because it mainly feeds on herrings , sprats and brislings .

Differences between aquaculture and wild catch

The color intensity differs between Atlantic salmon from aquaculture and those from wild caught. In a sensory analysis, the wild salmon was found to be darker, more colorful and less yellowish than the salmon from aquaculture. However, instrumental color analyzes could not determine any color differences. In the case of silver salmon, comparisons showed that wild salmon is consistently dark red in color, while silver salmon from aquaculture appears more yellow. Astaxanthin (E 161j) is added to the fish meal so that the meat of farmed salmon also looks appetizingly pink . Without this additive, the meat will be gray in color. Wild salmon also consume astaxanthin with their natural diet, but in much smaller quantities.