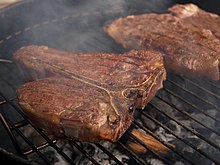 Porterhouse steaks on the grill

A steak ( English steak [ steɪk ], from Old Norse Steik , "roast", to steikja "roast on a spit"; cf. Icelandic Steik "roast" ; steikt , "fried") is a slice of beef that is suitable for short frying or grilling . Steaks that come from other animals and meats, marked accordingly in their name (eg. As veal steak , pork steak , turkey steak , venison steak , etc.). Slices of larger, firm-fleshed fish such as swordfish , tuna , shark or salmon that are cut across the spine are also known as steaks.

In principle, a beef steak can be cut from any part of the beef muscle that is suitable for short frying. However, lean, low-connective tissue sections are preferably used. As a rule, steaks do not contain bones. Exceptions are: T-bone steak, porterhouse steak, rib steak, sometimes also club steak and American cuts of sirloin steaks (pin bone sirloin steak, wedge bone sirloin steak, etc.). It is not prescribed for all steaks which part they are cut from; rather, terms such as gourmet steak, barbecue steak, grill steak, councilor steak are purely imaginary names. Most steak cuts, however, are precisely defined by food law and their names clearly indicate the use of certain cuts of meat.

Suitable cuts of beef are:

filet
Divisible into the thin fillet tip (end piece), the high quality middle piece and the fillet head located in the leg, qualitatively below.
Hip (also called flower)
A section from the club that can be dismantled into the hip pin, the narrow and the thick hips. The latter two pieces form the so-called steak hip (sometimes only the thick hip is used for steak cuts).
Upper shell
Another part of the leg, which can be divided into the (round) upper shell , which is more suitable for braising, e.g. for roulades , and the smaller corner piece (also called cone), which is better suited as steak meat.
roast beef
Divisible into the round roast beef , which protrudes into the high rib in the shape of a tongue (hence also called tongue piece in some regions), and the flat roast beef, which comes from the lower back. The flat roast beef with backbones and fillet is known as the big loin.
Prime rib (also called high rib or high roast beef)
Lies between the sixth and ninth thoracic vertebrae . The raised rib consists of the flat high rib lid and the round roast beef, which forms the lean core or the rib eye of the prime rib. Complete slices of the prime rib (also with bones) or just the removed core can be used for steaks.

A well-known steak is the T-bone steak, which consists of the meat of the roast beef and the fillet and also contains an eponymous T-shaped lumbar vertebrae . The butcher cuts these steaks into slices weighing up to 700 grams . A beef fillet medallion, on the other hand, consists of the meat of the fillet tip or the center piece and weighs less than 150 g. In general, a cut of approx. 200 g per person (160–250 g) is recommended for boneless steaks. For smaller cuts (tournedos, filet mignon, beef fillet medallion), two pieces of meat may be required per person. Bone-based steaks are heavier due to their non-edible components. The slice thickness of a steak is usually at least two centimeters.

The cooking times relate to well-hung meat from a young cattle and to the medium cooking level.

A fish steak is a slice of the fish cut across the center bone, compared to a fish fillet , which is always cut parallel to the center bone. In order for the steak not to fall apart during the cooking process, the fish meat needs to be fairly firm.

Suitable for cutting steak are e.g. B. salmon , swordfish , halibut , turbot or tuna . The larger fish make boneless steaks, while smaller fish (such as salmon) make steaks that contain skin, meat, the middle bones and smaller bones. Fish steaks are usually grilled, fried, baked or deep-fried (with or without breading ).

Poultry steaks (turkey steak, chicken steak) are usually obtained from the breast fillet of the animals.

Horse steaks are mainly cut from the fillet, the back and front back, the topside and the hip.

Steaks, venison fillets or medallions are cut from venison .

All steaks (with the exception of fish steaks) are cooked by roasting or grilling , rarely also by poaching . However, with some types of steak, short, spicy searing, followed by cooking in a preheated stove, is becoming increasingly popular. Different cooking levels are distinguished here.

Before a steak is put on the grill or in the pan, it should be stored for some time at room temperature so that the core temperature reaches ambient temperature (approx. 20 ° C).

The steak prepared in the pan should rest in the preheated oven for about five to eight minutes before serving. The reason for this is that the meat fibers are under great tension from the heated meat juice and so a lot of juice escapes when the meat is cut. Resting reduces the pressure in the cells and thus the juice leakage during the cut.