Master Butcher is a redirect to this article. See also: The master butcher: German butcher courier

Production of liver sausage in Berlin (1948) 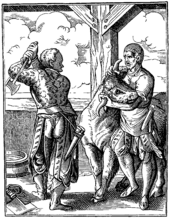 Master butcher and journeyman during the slaughter, engraving by Jost Amman , 16th century. 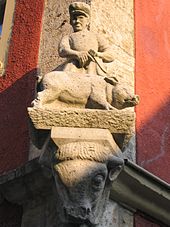 The butcher (common in central and eastern Germany ), also butcher ( southern and southwest Germany , North Rhine-Westphalia , Switzerland , western Austria ), butcher , butcher and Küter ( northern Germany ) as well as butcher and butcher ( Austria ), is an old craft occupation . Butchers deal with the slaughter and the production of meat and sausage products , they work in slaughterhouses and butcher shops .

The first evidence of these activities can be found among the Gauls who made sausages .

In northern Germany in the Middle Ages the butchers who were organized in guilds or guilds who processed and sold the meat were known as bone cutters. In many cities, for example in Bremen or Hanover, there are still the street names Bonehauergasse and Bonehauerstraße , in Hildesheim the Bonehaueramtshaus . The craftsmen responsible for the slaughter were called Küter (see Küterstrasse in Kiel and - until 1940 - in Riga, Kütertor in Kiel, Lübeck, Stralsund, Rostock) because they received the animals' entrails ( mnd. Küt ) and heads as wages . The meat hall in Zurich was one of the traditional meat markets .

The job description of the butcher has changed a lot in recent years. Instead of slaughtering, meat is refined today. Due to this change in the profession and the associated concentration on a few slaughterhouses, the processing of slaughter-warm meat for the production of boiled sausage, which was customary until the 1970s, is almost no longer possible. For this, a close connection between slaughter and processing is necessary, as the meat has to be boned , selected and processed within twelve hours .

Regional distribution of the names

The name butcher became the sole name of the trade in Germany in 1966, but it has not been able to displace the widely established names butcher, butcher and meat chopper . Metzger has remained the predominant name, especially in southwest and south Germany and in Switzerland . In East Germany, the profession is referred to as a butcher, in some areas also as a butcher . In the north of the German-speaking area, the butcher is referred to as a butcher (sometimes also butcher ); in Austria butchers and butchers are the most common varieties. The historical variants, butcher or southern German Metzler , however, have almost died out.

Personal equipment of the butcher

Personal equipment and protective clothing of the butcher

During the slaughter work, the butcher always has his knives close at hand and safely stored in the knife quiver, strapped to his belt. The sharpening steel is also attached to the belt and always ready to hand.

The training to become a butcher takes three years.

Elective qualification Two must be chosen, at least one of them from numbers 1 to 3

The focus is on meat production, meat processing and meat refinement.