The bone carving office building originally built in 1529 is the most famous half-timbered house in Hildesheim . Today the listed building houses, among other things, a restaurant and the Hildesheim City Museum.

The Knochenhaueramtshaus was the Guildhall of Fleischer (Knochenhauer). Like the guild houses of the other Hildesheim craft associations, the half-timbered building , which belongs to the German Renaissance, stands on the market square of the old town, opposite the town hall. Due to the prestigious, towering decorative facade, the building was considered "the most beautiful half-timbered house in the world", which is said to go back to a remark by Eugène Viollet-le-Duc in the 19th century.

In addition to being used as a sales room, the cellar vaults were also used as storage space. Meetings of the guild were held on the first floor , and store rooms and apartments were housed on the other upper floors. The gable roof and the gable were destroyed in a fire in 1884.

The 26 meter high building was completely destroyed by British and Canadian air forces on March 22, 1945 during the air raid on Hildesheim . Although it was not hit by bombs itself, it was caught in the fire that destroyed almost the entire city center.

After the Second World War , the Hotel Rose was built in its place in 1962 based on a design by the Hanoverian architect and university professor Dieter Oesterlen (1911–1994) . Many Hildesheimers considered the bone carving office building to be the symbol of Old Hildesheim, and so the desire to restore it remained alive. The opportunity arose in the 1980s when the Hotel Rose went bankrupt. During the same period, the Hildesheimer Stadtsparkasse was planning to build its new headquarters on the south side of the market square. The city administration took this opportunity and decided to completely rebuild the historic market square.

In contrast to the buildings on the north and south side of the square, in which only the facades were closely based on the original historical design, the bone carver's office building was reconstructed from 1986 to 1989 together with the baker's office building on the left using the traditional half-timbered construction . For this purpose, 400 cubic meters of oak wood were used and over 4,300 wood connections were made with approx. 7,500 wooden nails. Above all, the carvings on the entire beam structure of the two exposed facades, on windboards and on consoles are impressive . The original decoration of the wind boards on the north side facing away from the market square was not precisely documented and could therefore not be reconstructed. Instead, they were decorated with modern paintings by various artists that symbolize war and destruction. A portrait mask of Norbert Blüms , who was Federal Minister of Labor at the time of the reconstruction of the building, is also located on a clasp on this facade .

Today the building houses, among other things, a restaurant and the Hildesheim City Museum. In a 2006 NDR survey, viewers voted it the most beautiful of the “100 most beautiful buildings” in the broadcasting area.

Some sayings on the wind boards

The world wants to be betrayed

Avarice is the root of all evil

Wherever one sings, sit down happily! Bad people don't have songs.

If the guard is not watching, the thief is watching.

Poor or rich, death makes everything the same.

The reconstruction of the bone carver's office building with the baker's office building was controversial and in the 1970s and 1980s sparked considerable controversy not only among urban society, but also among monument preservationists. A highlight was the documented debate at the 1989 annual meeting of the Working Group for Theory and Teaching of Monument Preservation, which was specially convened in Hildesheim . At the same time, this dispute has also become history, so that both half-timbered houses were entered in the monument register in 2018, around a generation later after a renewed specialist debate, now with the significance as outstanding evidence of urban repairs in the second half of the 20th century. 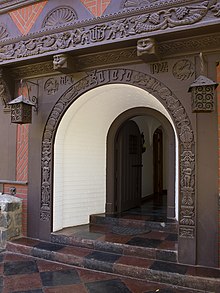 The "Casa Hildesheim Baviera" from 1924 in Zapallar, Chile

In the Chilean Región de Valparaíso in the seaside resort of Zapallar , a very freely modeled replica of the bone carver's office was created in 1924, which was placed under monument protection in 1975 and was given the name Casa Hildesheim Baviera ("Bayernhaus Hildesheim"). The architectural taste of the Chilean upper class that prevailed at the beginning of the 20th century was based on European models. The architect Josué Smith Solar designed an opulent holiday home by the sea that stylistically took up the shapes of the bone carving office.