from Wikipedia, the free encyclopedia
This is the spotted version , flagged on June 26, 2020 . There is 1 pending change that has yet to be viewed.

The Hildesheim Cathedral was completely destroyed. After ten years of reconstruction, it was re- consecrated in 1960 .

The air raids on Hildesheim in the last ten months of the Second World War destroyed large parts of the Lower Saxony city ​​of Hildesheim . In the period from July 1944 to March 1945, Hildesheim was targeted seven times by units of the United States Army Air Forces (USAAF), the Royal Air Force (RAF) and the Canadian Air Force (RCAF). The last and heaviest attack by the RAF and RCAF, which hit the center and the old town at noon on March 22, 1945, killed 824 people.

In particular, the area bombing of civil targets (inner city, residential areas) by the RAF Bomber Command took place on the basis of the Area Bombing Directive issued by the British Air Ministry on February 14, 1942 . The aerial warfare of World War II claimed a total of 1,511 victims in Hildesheim. Other sources give a figure of 1,736.

Economic importance of the city

With the exception of the last year of the war, the medium- sized town with almost 72,500 inhabitants in 1939 was considered an insignificant destination because, according to the British RAF Bomber Command, the industry there was of little military importance. At most , the freight and marshalling yard to the west of Hildesheim's main train station was considered of military value .

Bosch magneto ignition and starter from Hildesheim were u. a. in the V12 - Maybach - petrol engines of the type HL 230 of the Tiger tank installed

Contrary to this assessment, new factories important to the war effort were created in the city in the 1930s as part of the armament of the Wehrmacht . VDM -Halbzeugwerke GmbH at Römerring, founded in 1934 (colloquially known as "Metallwerk Hildesheim" ), was an important supplier to the aircraft industry with the manufacture of components for controllable pitch propellers , landing gears and aircraft engines ( cylinder heads , crankcases and oil pans ). In addition to its well-known field kitchens , the long -established Senkingwerk in the immediate vicinity also manufactured fuses and parts for armored vehicles of the Wehrmacht . Not far away, Eduard Ahlborn AG (today Kelvion PHE in Sarstedt ) built torpedoes for the navy in its 1938/39 factory on Cheruskerring . The Wetzell rubber Werke AG (from 1968 part of the Hamburg Phoenix rubber works ) presented on Moritzberg gas masks and life vests and life boats for Navy and Air Force ago.

In December 1937, planning began for the plant with the cover name "ELFI" ( Elektro- und Feinmechanische Industrie GmbH ) under the direction of Robert Bosch GmbH . (see also: Neuhof - ELFI-Werk ) To the southwest of the city in the Hildesheim forest , starters , alternators , magneto starters and inertia starters for large truck and tank engines were to be manufactured. Production at ELFI, which began in 1940, reached its full extent two years later. The company, renamed " Trillke -Werke" at the end of 1942, was the sole manufacturer of these important components from autumn 1943, as their production facilities at the Bosch headquarters in Feuerbach were at great risk from the air raids on Stuttgart and were moved to the Trillke-Werke in Hildesheim. In addition, at the beginning of 1945 the Bosch subsidiary Blaupunkt relocated its production in Küstrin, which was endangered by the battle for East Pomerania, to Trillke in the Hildesheim forest.

The first direct attack on the city on July 29, 1944 killed 34 people. The sugar refinery on the Römerring opposite the Senkingwerk received severe damage.

On the night of August 13, 1944, 20 explosive devices and 80 incendiary bombs fell in the Römerring industrial area. There was slight damage to the sugar refinery and the VDM metal works. Some bombs hit a residential area in Südstadt , where one house was destroyed and five others were badly damaged. Several bombs hit a POW camp in the area of ​​the streets Am Pferdeanger / Vor der Lademühle. Ten prisoners of war died there.

On November 26, 1944, the city was attacked again, presumably as an alternative target ("Target of Opportunity"), from 11 a.m. to 1.30 p.m. There were no personal injuries; in the center, several houses on Burgstrasse and the corner of Alter Markt were damaged. A house on Matthiaswiese in Weststadt was destroyed.

On February 13, 1945, an aerial mine fell on the tennis court on Johanniswiese at night , damaging numerous house roofs, but not harming people.

On the afternoon of February 22, 1945, as part of the Allied Operation Clarion , the destruction of traffic routes such as railway junctions, stations, ports, bridges and similar facilities, an attack on the Hildesheim freight and marshalling yard was severely damaged. 102 houses in the city were completely destroyed. 106 houses and the two churches of St. Bernward and St. Lamberti were badly damaged, a further 998 houses, the cathedral and Michaeliskirche as well as St. Jakobi and St. Andreas were slightly damaged. About 250 people died in this attack. To repair the damage caused, the SS set up the Hildesheim subcamp , which existed from March 2 to March 26, 1945.

On March 3, 1945, Hildesheim became an alternative target ("target of opportunity") for a planned air raid on Braunschweig . A total of 583 high-explosive bombs fell on the Oststadt , with 51 houses being completely destroyed. Of the 58 damaged houses, 22 were only lightly hit. 52 people were killed. 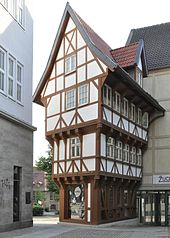 Back of the cathedral with the “ millennial rose bush ” in bloom, June 2016

On March 14, 1945, parts of the First Air Division bombed several targets in the Hanover area , including the VDM metal works and the freight and marshalling yard in Hildesheim. While the latter was hit hard again and had to be shut down for several days, the bombers missed the VDM plant and instead hit the halls of the neighboring sinking plant , which was completely destroyed. Over 150 people died, including 60 prisoners of war.

On March 22, 1945 Hildesheim was the most important daily destination of the Allied bomber fleets. British Royal Air Force units flew an attack on the city center together with Canadian Air Force bombers. The RAF Bomber Command used a combination of high explosive and incendiary bombs . This combination should create a firestorm . The exact selection of the area to be bombed was made on the basis of aerial photographs, statistics on population density and fire insurance cadastral maps that had been deposited with British reinsurance companies by German fire insurance companies before the war . The Hildesheim old town was selected as the core area of ​​the attack, as the proportion of combustible materials was highest in the old half-timbered houses . From 2:00 p.m. to 2:15 p.m., over 250 bombers (according to the RAF Bomber Command's war diary: 227 Lancasters and 8 mosquitos) dropped a total of 438.8 tons of high-explosive and 624 tons of incendiary bombs. 75 percent of all buildings were destroyed or damaged by the attack, including almost all of the historic old town.

The thousand-year-old rose bush on the apse of the cathedral, one of Hildesheim's landmarks , burned and lay buried under rubble. The center with its medieval development known as the “Nuremberg of the North” was almost completely destroyed, while the war-important Trillke works in the Hildesheim forest and the Ahlborn torpedo building on the Cheruskerring were not hit.

Christmas market 2007:
The bone carving office building (back right) on the market square was reconstructed from 1986.

Around 34,000 inhabitants (46%) were homeless at the end of the war. The rapid reconstruction in the 1950s with its simple buildings characterizes today's cityscape . All the churches, two of which were later added to the UNESCO World Heritage List , had been rebuilt by 1960. Partial reconstruction of the historic market square began in the 1980s . Some of the concrete buildings erected in the 1950s and 60s, including the "Hotel Rose", were demolished and replaced by reconstructed historical buildings such as the bone carving office. In autumn 2007 the decision was made to rebuild the inverted Sugar Loaf , a half-timbered house that was completed in October 2010.

Every year on March 22nd, the main bells ring in all inner-city churches to commemorate the air raid in 1945.