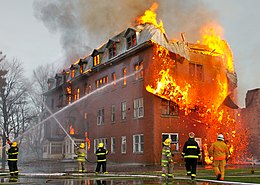 A fire insurance replaced substantially by a fire damage caused in accordance with its policy conditions . It can be used to insure movables, real estate and loss of income via fire business interruption insurance. In addition, the insurance cover includes the reimbursement of a number of costs such as cleaning and demolition costs.

According to the company, the oldest insurance company in the world is the Hamburger Feuerkasse , founded by the Hamburg council in 1676 , which is based on the conclusion of the Hamburg "fire contract" from 1591 by Hamburg breweries. Almost as old is the “Tiegenhöfer Brandordnung” from 1623. It was brought into being by Mennonites in the Great Werder near Danzig and is based on the Christian idea of ​​mutual help in emergencies. The fire insurance for buildings, usually known as “fire insurance”, was compulsory and monopoly insurance in many areas of Germany . In addition to their actual tasks, the insurers promoted the development of the fire brigade in their regions by subsidies for equipment purchases and payment of extinguishing premiums after fires.

Fire insurance was required by law in Bavaria , Baden-Württemberg and Hamburg as well as in parts of Hesse and Lower Saxony until 1994. The insurance was taken over by the respective public insurers, which acted as a regional monopoly . In the course of the liberalization of the insurance market in 1994, monopoly and compulsory insurance were abolished. This meant that public insurance, which existed as building insurance companies in every federal state , had to be privatized. Most of the building insurance companies were merged in several stages and sold to the respective savings bank insurers.

Fire insurance has now lost its status as an essential insurance line to life and motor vehicle insurance.

The state-sponsored Extremus Insurance was founded as a result of the events of September 11, 2001 to protect companies against terrorism damage .

Fire insurance is essentially intended to replace fire damage. While fire insurance is usually not offered in its pure form in private customer business, the General Conditions for Fire Insurance (AFB) published by the General Association of the Insurance Industry apply to the commercial and industrial sectors. Since the insurance market has not been regulated since 1994 and insurance conditions are no longer subject to content control, insurers can also develop their own sets of conditions. In practice, the AFB (especially in the AFB 87 version) play a dominant role.

The definition of fire damage is therefore uniform in most insurance contracts and as follows:

"A fire is a fire that has arisen or left without a designated stove and that is able to spread on its own."

A fire is a burning process with the appearance of light. A glow or glow is already considered a light phenomenon. According to the prevailing opinion, a combustion process only occurs when oxygen is supplied . In industry in particular, however, other atmospheres can also prevail in containers and boilers, in which a combustion process can occur. That is why there are often more detailed formulations in the relevant insurance contracts.

From the above definition it can be deduced in particular which damage is not included:

In practice, in the event of fire damage, a so-called operational damage is often deducted from the compensation. For example, if a fire occurs due to a technical defect in a television or machine, the preceding defect is not an insured damage. The subsequent fire only destroys a worthless / unusable defective object and therefore does not cause any further damage.

Fire insurance not only covers fire damage, but also

and is therefore much more extensive than in the beginning. In industrial insurance in particular, the FLEXA dangers (Fire, Lightning, Explosion, Aircraft) are often used because of the initial letters . The fire hazards can be expanded for commercial and industrial customers by a large number of clauses, such as the improper escape of glowing molten molten mass (e.g. in a steelworks) or useful heat damage (damage to objects that are expediently exposed to great heat). The aforementioned operational damage can also be insured within certain limits.

Fire insurance also reimburses damage caused by arson . If a perpetrator can be identified, the insurer will take recourse after the settlement . A self-arson by the insured is exempt from this, as it is then insurance fraud. There is a strict burden of proof attached to a damage rejection due to arson, and the insurer must provide full evidence that the policyholder (or an authorized person) is responsible for the arson.

Pure fire insurance contracts are rarely found in practice; the risk of fire is usually combined with other components (e.g. tap water or storm / hail) in one contract. Due to the high potential for damage, fire insurance is the determining factor for the insurance premium .

In industrial insurance, the premium rate for fire insurance (in per mille of the sum insured) is determined by what is known as a tariff, often as part of a fire safety inspection. The main factors are the operating mode, the structural fire protection (e.g. fire walls) and the technical fire protection (e.g. sprinkler systems). The General Association of the German Insurance Industry published a series of tariff books for the calculation, the last time in the 1990s. This included statistics from the member companies on a large number of fire damage. The most recently published tariff T96 is still in use today, as there are no market-wide statistics on the fire risk of individual operating modes and many smaller insurers are unable to make actuarially reliable calculations due to a lack of data / claims experience . The disadvantage of this practice is the fact that the data contained in the tariff is based on the technical status of the 1990s and no longer depicts any new risk potential. In addition, in recent years various industries (e.g. meat processing, paper production) have suffered significantly more damage than previously assumed. The GDV tariff can therefore no longer be assessed as a reasonable calculation basis in some areas.

The term Probable Maximum Loss (PML) should be seen in connection with industrial fire insurance . This indicates the probable maximum damage in the event of a fire, if all technical fire protection measures (e.g. sprinkler system) and some structural fire protection measures should fail. Cases of arson and disaster scenarios such as plane crashes are not considered . The PML is an essential parameter for insurers and has a significant influence on the willingness to subscribe. Large corporations with many different locations have extremely high sums insured (regularly in the billions), but the risk of individual damage is significantly lower, since only one location is affected at a time. The PML is also an important criterion when passing the risk on to a reinsurer.

In order to prevent the risk of fire, which is higher in comparison to private risks, there are usually further obligations in industrial fire insurance contracts . In the event of a breach of these requirements, the insurer may be exempt from the payment or entitled to a reduction in the event of a claim. The corresponding regulations can be found in the Insurance Contract Act or individual contractual agreements. An important regulation is, for example, the revision of the electrical systems by a VdS-recognized expert on an annual basis. Since around 30% of all fire damage in the commercial / industrial area results from defective electrical systems, property insurers do not consider the trade association / official test regulations (e.g. BGV A3) to be sufficient. The test by a VdS-recognized expert is much more extensive and often reveals a large number of deficiencies that are not discovered by other test methods. Due to the additional costs that arise, a number of companies refuse the VdS audit in practice, but this puts their insurance cover at considerable risk.

The general safety regulations of fire insurers for factories and commercial plants are also frequently encountered . These are to be displayed in the insured company and employees are obliged to comply with them. The safety regulations include 10 points such as dealing with fire barriers (fire protection gates) or hot work.

In addition to fire insurance, a premium-free fire shell insurance is usually granted if necessary . This protects objects under construction / renovation against fire damage. This special solution is necessary because buildings and components under construction under the usual conditions are not covered by insurance. Fire shell insurance is usually granted free of premiums if the property to be constructed is then included in the insurance contract.

The fire insurers and the German insurance industry as a whole carry out extensive studies and tests to prevent fire damage. Through the VdS Schadenverhütung GmbH, u. a. published a large number of guidelines and articles on fire protection. These are used by most of the insurance companies active in Germany as a basis for risk assessment and are particularly important for industrial customers. Without compliance with the VdS guidelines (e.g. design of sprinkler systems), significantly higher fire insurance premiums can be expected. The requirements of the VdS (and thus of the insurance industry) are usually much more extensive than official requirements, as the protection of property is the priority for insurers, while the focus of official requirements is on personal protection .