Bodyguard is a redirect to this article. Further meanings are listed under Bodyguard (disambiguation) . 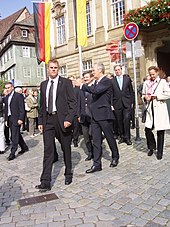 Personal protection is the guarantee of the personal safety of a person worthy of protection (protection person ) against attacks (kidnapping, assassination, etc.) by third parties. The protection of objects, however, is guaranteed by object protection. State and private security services are active in both areas . Bodyguards also be bodyguards or anglizistisch as a bodyguard called. Due to the high personnel costs , bodyguards are usually only used for wealthy, significant or directly threatened people ( politicians , business leaders, stars , key witnesses , mafia bosses ).

Bodyguard (bodyguard) work both in the private security service as in the public sector such. B. at the police . They are mostly equipped with firearms and communication equipment and trained in hand-to-hand combat . High risk protection persons receive personal protection from several bodyguards. The classic tactic of protection is the protective cross, which is a diamond-like arrangement of the bodyguards around the guardian. Bodyguards often work in civilian clothes. They usually move in close contact with the guardian. If several bodyguards are active, they are also active in the personal environment of the guardian. The main task is the timely recognition and prevention of dangers for the protected person. In doing so, you pay particular attention to conspicuous behavior of people, unusual appearance, as well as striking objects and processes.

Armored (specially protected) vehicles (divided into different protection classes) can be used to transport a person in protection. According to the current state of the art, these can hardly be distinguished from normal motor vehicles from the outside.

In Germany , the work of state bodyguards is regulated by law and recorded in service regulations. The Federal Criminal Police Office (BKA) is responsible for the security of the members of the constitutional organs and their foreign guests and maintains the Security Group (SG). For the protection of prime ministers or ministers of state is state police of the federal state or local police headquarters responsible; here the principle of residence applies. Politicians abroad are supported by bodyguards from the security group (SG) of the Federal Criminal Police Office (BKA) and by a component of the specialized personal protection for foreign and special operations (ASE) . The protection of the German ambassadors in Iraq and Afghanistan is taken over by the personal protection forces of the Federal Police ( PSA) and officials of the state police, with the exception of the state of North Rhine-Westphalia . The ambassadors accredited here are accompanied by the responsible federal state. The type and scope of personal protection are determined by the state security according to individual risk analyzes (protective measures 1–3) and can vary daily. In the Bundeswehr there are also bodyguards with the same training as the BKA and LKA etc. a. for the inspector general of the Bundeswehr and in foreign deployments of the Bundeswehr for national and international contingent leaders, visitors and guests of the Bundeswehr, as well as for the permanent representative at the NATO headquarters in Brussels. These belong to the military police .

On the other hand, actors or pop stars, for example, have to hire and pay their bodyguards themselves, provided they are not subject to any particular threat (see above). In order to be considered particularly threatened and thus entitled to state-guaranteed personal protection, comparatively high requirements must usually be met. Even in cases of acute threat from, for example, organized crime , comprehensive state protection is rarely guaranteed and usually referred to private service providers who are also monitored by legal regulations and have to meet special requirements.

For personal protection of the Pope is Swiss Guard jurisdiction.

These are as follows:

Even at risk level I, personal responsibility is usually encouraged. State personal protection for private individuals is very rare.

The first requirement is the state security permit according to § 34a GewO for security companies with certain conditions of approval. For employees, this also includes a 40-hour briefing or the IHK proficiency test, both of which, however, do not convey or require any personal protection-specific content and are therefore not sufficient. There is no generally recognized occupation of bodyguard in Germany. In addition to the above-mentioned commercial access requirements for guarding activities, interested parties have the opportunity to complete further training in this field of activity, which primarily private educational institutions offer due to the lack of government regulations and recognized educational content in different quality. At least an extended legal and psychology training, basic personal protection training , the weapons proficiency test according to § 7 WaffG and personal protection-related training measures , a multi-day driver safety training , conditioning and self-defense as well as first aid knowledge should be part of such training and further education. Holistic personal protection also includes property protection elements and other subject areas.

There are significant differences between official and private personal protection both in the way they work and in relation to the legal framework and the training of bodyguards. In private personal protection there are seldom acute threats, escort protection often serves the subjective sense of security of the protected person and prevention. Official bodyguards usually protect the lives of high-ranking politicians and state guests .

Private security service providers only work on the basis of “ everyone's rights ” (such as temporary arrest according to Section 127 StPO , self-defense , emergency aid, emergency) and have no police powers or sovereign rights. You can be assigned property servant rights (see also § 855 BGB ).

Official bodyguards, on the other hand, can make use of their sovereign enforcement rights. This fact is of considerable advantage both in the preventive preliminary investigation of an operation and during the actual protection mission.

The bodyguard in history

Historically, a bodyguard (as a military association known as the bodyguard ) is a force that was intended for the immediate protection of the ruler . The bodyguard was already known in ancient times, for example the Persian kings had the 10,000 immortals as a select group of guards. Even Philip of Macedon and his son Alexander the Great created from the sons of the gentry a mounted bodyguard ( somatophylakes ). However, it was not only the protective function of these guards that played a role for their masters. In the opposite case, the aspect of the bodyguards as hostages was just as important. Because their sons served in the ruler's bodyguard, the lesser princes were also under his control - a good way of preventing insurrections.

In republican Rome the commanders of the army had the Cohors praetoria as bodyguards, which later developed into the Praetorian Corps. The Roman emperors created a special bodyguard, the Custodes corporis , which consisted of Teutons . The bodyguards of the Byzantine emperors also traditionally consisted of foreign pagan mercenaries such as Varangians , Cumans or Pechenegs , who themselves could not lay claim to the throne.

In the Ottoman Empire , the Janissaries were bodyguards for a long time. In the Middle Ages, bodyguards were the only standing troops of a prince and were often used against insubordinate vassals . Before 1918, only the rulers of Austria-Hungary and Bavaria had special bodyguards in the German-speaking area . During the time of National Socialism , Adolf Hitler's bodyguard was provided by the Führer Accompanying Command , which administratively belonged to the staff of the Leibstandarte SS Adolf Hitler .

The United States Secret Service (USSS) is one of the most famous personal protection organizations worldwide. In addition to the financial police, his job is to protect the president, vice presidents, their families and other high-ranking US politicians.