Hermann Otto Prinz zu Solms-Hohensolms-Lich (born November 24, 1940 in Lich ) is a German politician of the FDP and was, with interruptions, treasurer of the party from 1987 to 2020 . From 1991 to 1998 he was chairman of the FDP parliamentary group and from 1998 to 2013 one of the vice-presidents of the German parliament . He has been the age president of the 19th German Bundestag since 2017 and thus also opened its constituent session . Mostly he uses the name Hermann Otto Solms in public , under which he is generally better known.

Hermann Otto Solms attended the Stein an der Traun educational home from 1950 to 1960 . After high school in 1960 at the Humanities College Pasing made Solms initially until 1961 his military service in the Air Force air defense battalion 45 in Lindau and completed in 1962, a bank clerk at BHF-Bank in Frankfurt, which he 1964 with the commercial assistant examination completed. He then began studying economics and agriculture at the Johann Wolfgang Goethe University in Frankfurt am Main and the Justus Liebig University in Gießen , which he completed in 1969 with a degree in economics .

From 1969 to 1970 he was Research Assistant for Agricultural Economics at Kansas State University . From 1970 to 1973 he was a research assistant at the Institute for Agricultural Management at the Justus Liebig University in Giessen. From 1973 to 1976 he was personal advisor to Liselotte Funcke, then Vice-President of the Bundestag . In 1975 he became the department 20 (Nahrungswirtschafts- and Home Economics), University of Giessen with a dissertation The company game as a training method in agriculture to Dr. agr. PhD.

From 1976 to 1984 Solms was as entrepreneurs independently. From 1976 to 1982 he was the managing partner of Datagraph GmbH Computersysteme in Lich near Gießen. 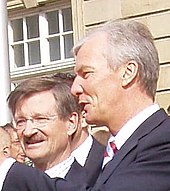 In 1997 Solms, in his role as treasurer of the FDP, had requested the quarterly installments of the state party financing , but forgot to set the total amount. The then Speaker of Parliament Rita Süssmuth ( CDU ) had the amount paid out, but the Cologne Administrative Court denied the legality of the payment - it was about DM 12.4 million . The Münster Higher Administrative Court later reduced the repayment amount to DM 300,000, and the Federal Administrative Court ruled in May 2000 that the application had been submitted correctly and on time and that repayment was therefore not necessary.

After the sudden death of his successor Günter Rexrodt in August 2004, Solms was provisionally reappointed treasurer and elected on May 5, 2005 at the federal party conference in Cologne with 90.6% of the vote.

On December 7, 2013, he was re-elected as federal treasurer at the federal party conference in Berlin with 88.6% of the vote. 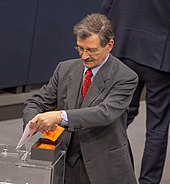 After the 1998 Bundestag elections , he was elected to the office of Vice President of the German Bundestag on October 26, 1998 , which he held until October 2013. Hermann Otto Solms always entered the German Bundestag via the Hesse state list . As Vice President, he was allowed to perform a historical function marginally and unnoticed: On July 1, 1999, he closed the last regular session of the Bundestag in the plenary hall of the Bundestag building in Bonn. This ended 50 years of Bonn parliamentary history.

On December 8, 2012, Solms lost to Heinrich Kolb in a fight for the top spot on the Hessian state list . As a result, Solms refrained from applying for positions on the list below. After the federal elections in 2013 , Solms left the Bundestag; the FDP failed in this election anyway because of the 5 percent hurdle.

Solms then announced that he would run again in the 2017 federal election. According to his own statement, he wants his candidacy to be understood in particular as an encouragement for older people to get involved in society. As a direct candidate for the FDP in constituency 173 , he received 7.7 percent of the vote. He moved into the new Bundestag as one of six Hessian liberals via the state list of his party and is thus again a member of the German Bundestag after a four-year break.

Solms is the age president of the 19th Bundestag , as he was a member of the German Bundestag for 33 years until 2013. Originally, with 45 years of service, Wolfgang Schäuble would have granted this honor . As a candidate for the office of President of the Bundestag and because of the associated inaugural speech, Schäuble renounced the retirement presidency.

Solms is involved in the German Property Foundation on a voluntary basis , where he is chairman of the board of trustees. He was a founding member of the Association for the Promotion of the Berlin-Hohenschönhausen Memorial , which supports the work of the memorial at the Hohenschönhausen Stasi prison . Since 2003 he has been a member of the Board of Trustees of the Friedrich Naumann Foundation for Freedom .

Solms criticized Daimler AG's announcement that it would no longer make party donations in the future. Corporate donations are "so wanted by our constitution" and an appreciation of the voluntary work of party members.

Solms' grandfather was Reinhard Ludwig zu Solms-Hohensolms-Lich (1867–1951), 1920–1951 head of the House of Solms-Hohensolms-Lich, which was raised to the rank of imperial prince by Emperor Franz II in 1792 . His father was Hermann Otto Wilhelm Ludwig Prince of Solms-Hohensolms-Lich (1902–1940), Doctor of Philosophy and Lieutenant in the Air Force Reserve . He had an accident a few months before Solms was born while serving in the Second World War in Neuruppin . His mother, a granddaughter of the Prussian diplomat Count Georg von Werthern-Beichlingen , Gertrud (1913–1987), born baroness and mistress of Werthern-Beichlingen , married the writer Hans Joachim Sell for the second time in 1950 . Solms has four older siblings: Philipp Reinhard (1934–2015), farmer and 1951–2015 head of the Solms-Hohensolms-Lich family, Dorothea Countess Razumovsky (1935–2014), publicist and journalist, Wilhelm Solms (* 1937), Germanist and former professor of communication science and media didactics at the Philipps University of Marburg , and Eleonore von der Burg (* 1938).

In addition, he has two younger half-brothers from his mother's second marriage, Konstantin Sell and the economist Friedrich L. Sell .

His daughter Marie Christine is the founder of a start-up company and moved into the Lich city ​​council in 2016 for the FDP .

Hermann Otto Solms is Protestant . From 1969 to 1971 he was married to Margit (* 1944), daughter of the businessman Albert Mayer, and has been married to Christiane Meyer (* 1955), who has a PhD in agricultural engineering , since 1989 , daughter of the landowner Horst Meyer zu Eissen. He has three daughters with her.

Chair of the FDP parliamentary group

Vice-President of the German Bundestag from the FDP parliamentary group

Age President of the German Bundestag