Linda Teuteberg (* April 22, 1981 as Linda Merschin in Königs Wusterhausen ) is a German lawyer and politician ( FDP ). Since 2017 she has been a member of the German Bundestag , chairwoman of the FDP parliamentary group in the interior committee and its migration policy spokeswoman. Before that, Teuteberg was a member of the Brandenburg State Parliament from 2009 to 2014 . She has been an elected member of the FDP federal executive committee since 2011 and FDP general secretary from April 26, 2019 to (probably) September 2020 . In addition, she has been chairwoman of the FDP Brandenburg since November 30, 2019 .

Linda Teuteberg grew up in Görsdorf near Storkow as the daughter of a teacher and an engineer. She completed her Abitur at the Catholic high school Bernhardinum in Fürstenwalde / Spree .

With a scholarship from the German National Academic Foundation, she studied law and economics at the University of Potsdam and completed her studies with the first state examination in law. During and after her studies, she worked as a student and research assistant at chairs for public law and criminal law at the University of Potsdam. In 2003 she was awarded first prize in the student competition of the Federal Ministry of the Interior in the category Scientific Elaboration and the Wilhelm von Humboldt Prize from the Association for the Advancement of Legal Philosophy eV in Potsdam for her legal philosophical work on the subject of the “fair tax system” .

Teuteberg completed the legal preparatory service at the Court of Appeal and passed the assessor examination in 2013 . She was employed by the Federal Ministry of Education and Research and is admitted to the bar.

Teuteberg has been a member of the federal executive committee of the FDP since 2011 . Their re-election by the federal party congress in March 2013 led to criticism in the Brandenburg FDP because Teuteberg had stood for election without a vote by the regional association and had been proposed by the chairman of the FDP parliamentary group in the Schleswig-Holstein state parliament, Wolfgang Kubicki . The state party had provided for the position of the Brandenburg parliamentary group leader Andreas Büttner , who with a share of votes of 23.56 and 20.52% of the votes in two ballots at the federal party congress failed to make it into the body.

On April 17, 2019 she was proposed by FDP chairman Christian Lindner as the successor to Nicola Beer for the office of FDP general secretary. The election took place at the 70th ordinary FDP federal party conference.

On August 17, 2020, Lindner announced that Volker Wissing , Minister of Economics in the Dreyer II cabinet (Rhineland-Palatinate) would be elected as the new FDP General Secretary at the FDP Federal Party Conference 2020 , which was postponed to September due to the corona pandemic .

Teuteberg was elected to the Brandenburg state parliament on September 27, 2009 via the state list. During the election campaign she received support and a. by Hans-Dietrich Genscher .

In the state parliament, Teuteberg was a member of the legal committee, the judges' selection committee and the commission of inquiry "Dealing with the history and coping with the consequences of the SED dictatorship and the transition to a democratic constitutional state in the state of Brandenburg", and also a deputy member of the state parliament's budget and finance committees for Economy and for European affairs and development policy. Teuteberg was her parliamentary group's legal and media policy spokeswoman.

Teuteberg's political work focuses on coming to terms with the SED dictatorship, redressing the injustice caused in the GDR and advocating a liberal economic policy. In 2011, Teuteberg spoke out against the fact that municipal companies could compete with private companies and operate economically. In 2010, Teuteberg campaigned for the University of Potsdam , which, according to plans by the Brandenburg state government, should lose its law faculty. In 2010 she campaigned to lower the voting age to 16 years.

When Teuteberg was preparing for the second state examination in law in the fall of 2012 , FDP state chief Gregor Beyer claimed that Teuteberg was not fulfilling its duties as a member of parliament in terms of time. Teuteberg rejected the allegations and received support from colleagues in the parliamentary group: Teuteberg had agreed everything in the parliamentary group "down to the last detail". The Potsdam Latest News spoke of "defamatory" accusations and described Beyer as a "defamator". To state election in 2014 it did not happen again. 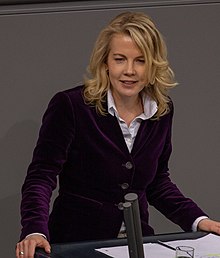 Linda Teuteberg in April 2019 in the German Bundestag

In November 2016, Linda Teuteberg was elected the top candidate of the Brandenburg FDP for the 2017 federal election at a state party conference . With 57 percent of the delegate votes, she prevailed against her competitor Axel Graf Bülow . In Brandenburg the FDP received 7.1% of the second vote, in Teuteberg's constituency 9.2%; Teuteberg received 7.5% of the first votes.

Teuteberg is also a member of the advisory board of the contact and advice center of the state of Brandenburg for former home children of the GDR as well as the board of trustees of SC Potsdam and the Karl Hamann Foundation .

Teuteberg is married to Björn Teuteberg and is Protestant . She lives in Potsdam with her husband.

State chairwoman of the FDP Brandenburg