Daniel Föst (born August 10, 1976 in Schweinfurt ) has been state chairman of the FDP Bavaria since November 2017 and an assessor in the FDP federal executive committee since May 2015 . In the 2017 federal elections , he entered the Bundestag as the top candidate on the FDP's Bavarian state list . He is the spokesman for building and housing policy for the FDP parliamentary group.

Föst was born in Schweinfurt. He attended the Rhön-Gymnasium in Bad Neustadt an der Saale , Lower Franconia , where he passed the Abitur. During his school days, Föst was a furniture maker and restorer of antiques. After an apprenticeship as a salesman in the furniture retail trade in Hamburg , Föst studied business administration at the University of Passau . From 1996 to 2005 he was in charge of Marketing & Communication at Opti Wohnwelt. From 2005 to 2006 he was a freelancer for various advertising and marketing agencies. From 2006 to 2016 Föst was an independent entrepreneur in the field of marketing and start-ups and was a consultant for the vocational school teacher training at the Technical University of Munich . He is married to Dagmar Föst-Reich and has two sons. 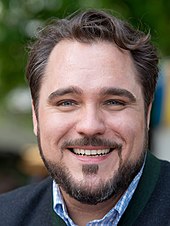 From 2005 to 2009 Föst was chairman of the Young Liberals in Munich. From 2010 to 2014 Föst was chairman of the FDP Munich and from 2008 to 2013 he was a member of the Upper Bavaria District Assembly. At the FDP state party conference in Bamberg in November 2013, Föst was elected General Secretary of the Bavarian Liberals, whereupon he did not run again for city chairmanship of the Munich FDP in April 2014. From 2008 to 2013 he was also an honorary member of the board of directors of the psychiatric clinics in Upper Bavaria. According to his own statements, Föst stands for a self-confident liberalism that encompasses the entire spectrum of civil rights, economic policy, but also educational and social policy.

In the 19th German Bundestag, Föst is chairman of the committee for building, housing, urban development and local authorities. In addition, he is a full member of the Committee for Family, Seniors, Women and Youth and is represented as a deputy member of the Children's Commission (commission for the perception of the interests of children).

As concrete political goals, he names more flexible working hours and workplace laws, a "year free of bureaucracy for company founders", the elimination of superfluous building regulations and an allowance for real estate transfer tax for one's own apartment, and new flexibility for families. He wants to change the reputation of the FDP "away from the image of an elite entrepreneurial party" towards a problem solver for people's real concerns. Föst is also a member of the non-partisan European Union Germany .

In 2017, Föst moved into the Bundestag via the Bavarian state list. In his constituency Munich-North (217) he got the best first vote result for the FDP in Bavaria with 9.6%. For the FDP parliamentary group, Föst is a full member of the committee for building, housing, urban development and municipalities as well as the committee for family, senior citizens, women and youth.

State chairwoman of the FDP Bavaria