Headquarters of the regional office of the FDP Rhineland-Palatinate in the provisions office in downtown Mainz .

Reference to the Hambach Festival

The Hambach Festival on May 27, 1832 is considered the cradle of political liberalism in Germany. An estimated 20,000 people moved to the ruins of the Hambach Castle to demonstrate for freedom, German unity and democracy. Freedom of the press and assembly included, in particular, the demand for equality for women before the law. The speakers had already outlined the idea of ​​a united, confederate republican Europe. Even today, the Rhineland-Palatinate FDP cites freedom of expression, freedom of the press and assembly, the rule of law and democracy as its defining values.

Liberal new beginning in the north and south

After the Second World War there were several liberal movements in Rhineland-Palatinate.

In the north, Peter Wolf and Wilhelm Rautenstrauch met in October 1945 to build a liberal party in the Trier area. The application for approval of a liberal-democratic party was initially not decided by the French military government responsible at the time. Wolf and Rautenstrauch, however, concentrated on the local elections in September 1946. Since the party was still not admitted, many liberals ran on free lists. At that time, the main focus of the liberal elected officials was the shortage of supplies, housing shortages and the establishment of a democratic school system. After the local elections, the application for approval was granted. However, the military government rejected the name and instead approved the name "Liberal Party Rhineland-Palatinate".

In the south, two liberal parties were founded after the Second World War , the Liberal Party (LP) and the Social People's Federation (SV). Both parties competed against each other with their own lists in the local elections in September 1946. The Soziale Volksbund spoke out against the planned economy , in favor of competition and medium-sized entrepreneurship . The “teachings of Karl Marx would lead to catastrophe when applied to the present day”, was the creed of the liberals. The aim was to achieve the abolition of the zone borders in order to enable the free movement of goods between the zones of occupation. 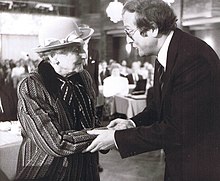 After the failure of a merger between the two southern liberal parties LP and SV in November 1946, they agreed on a joint delegates' day on 19/20. April 1947 in Bad Kreuznach . In Café Wahl, which still exists today, the delegates decided to merge the Liberal Party and the Social People's Federation to form the “Democratic Party of Rhineland-Palatinate”. Wilhelm Rautenstrauch was elected chairman, but died a few days after the election. Ellen Thress then took over the provisional chairmanship as a managing board member. In 1955, Ellen Thress was the first woman from Rhineland-Palatinate to receive the Great Cross of Merit of the Order of Merit of the Federal Republic of Germany (Great Cross of Merit ). In 2012 a street in Bad Kreuznach was named after Ellen Thress. In 1947 the party was renamed the “Free Democratic Party of Rhineland-Palatinate”, the name it still bears today.

Liberals between government responsibility and opposition

Peter Caesar 1989 in Andernach at the local political congress 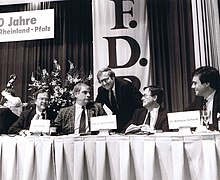 The first freely elected state parliament in 1947 elected an all-party government into office after a “tolerance agreement” between all parties. The FDP supported this government, which was due to the exceptional situation in the immediate post-war period. Fritz Neumayer became Minister of Economics and Transport. The communist minister for reconstruction, Willy Feller , fell out with the other governing parties over fundamental questions of the Marshall Plan . The CDU terminated the all-party government and formed a CDU / SPD coalition.

In the subsequent state elections, the Liberals competed against what they termed bloated administrative structures and rampant party-flocks. In addition, the FDP formulated economic policy principles and stood at the side of the farmers and winemakers. It moved into the Rhineland-Palatinate state parliament with 16.7% and achieved government participation with the CDU. During the government, the FDP was able to assert itself with its basic positions in school policy ("Protection of Simultanschule").

Several government participations followed until in 1963 the CDU and SPD were almost on par and the FDP, with 10.1%, tipped the scales. Even before the coalition negotiations, the SPD offered the FDP the office of Prime Minister if a coalition was entered into with the SPD. After negotiations with the CDU and SPD, the FDP refused and entered a government with the CDU. In the education sector and teacher training in particular, the FDP was able to agree on a liberal line with the CDU. An application for the mayor's primary election failed.

After the federal FDP entered the social-liberal federal government under Chancellor Willy Brandt , the state FDP lost government participation in Rhineland-Palatinate in 1971 and remained in the opposition until it failed to enter the state parliament in 1983.

On July 2, 1983, Rainer Brüderle took over the party chairmanship as head of economic affairs in Mainz and began a consistent consolidation. In 1987, Brüderle led the FDP back into the Rhineland-Palatinate state parliament and into the state government. With the CDU, the FDP pushed through the cumulation and variegation in local elections. In 1989 the introduction of the first and second vote in state elections followed. The FDP could not enforce the demand for direct elections of mayors and district administrators.

In 1991 the Liberals entered a coalition with the SPD. The FDP laid the foundations for the civil use of the many military facilities that were empty after the Allies withdrew. In 1993 the first civil flight to Mallorca took off from Hahn Airport . The FDP was committed to the expansion and further conversion of conversion properties, especially in structurally weak regions.

In 1994, Brüderle brought the Rhineland-Palatinate Clock into being as the responsible minister. The strong networking and timing of local public transport contributed to better mobility. After 25 years, the FDP was able to enforce the demand for a primary election of the mayors and district administrators, as well as the introduction of referendums and petitions .

With the state elections in 1996, Nicole Morsblech became the youngest member of the German parliament at the time. Rainer Brüderle became Minister for Economic Affairs, Transport, Agriculture and Viticulture. The focus was on the transformation of the “land of vines and beets” into a federal state with a wide range of medium-sized companies, strong industry and modern research. The 2001 state elections confirmed the FDP's government responsibility.

In 2006 the SPD achieved an absolute majority. The FDP refused the offer to participate in the government and went into the opposition. After a tough election campaign, the FDP missed re-entry into the state parliament in 2011.

The FDP Rhineland-Palatinate is divided into 32 district associations:

The district associations of the FDP Rhineland-Palatinate are divided into about 245 local associations at the association and local community level.

Group chairman in the state parliament

the FDP was involved in the following state governments in Rhineland-Palatinate:

Regional associations of the FDP

Historically represented in the state parliament: