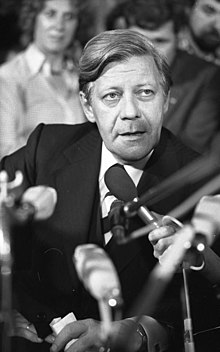 Helmut Schmidt during an interview on election night

The 1976 Bundestag election took place on October 3, 1976. The election to the 8th German Bundestag was the first after the resignation of Federal Chancellor Willy Brandt ( SPD ) in May 1974 and thus the first practical test for his successor Helmut Schmidt . The SPD lost first place to the Union parties , but the social-liberal coalition of the SPD and FDP maintained an absolute majority and was continued.

The CDU Chairman and Prime Minister of the State of Rhineland-Palatinate , Helmut Kohl , stood for the Union parties .

Despite an increase in votes for the Union parties, which led to an almost absolute majority, the social-liberal coalition was able to assert itself, but the SPD lost its position as the strongest parliamentary group .

The SPD took part in the election campaign under the motto Model Germany , while the CDU put up posters such as “safe, social and free”.

¹ in brackets: number of Berlin Bundestag members elected on the same day by the Berlin House of Representatives who are not entitled to vote 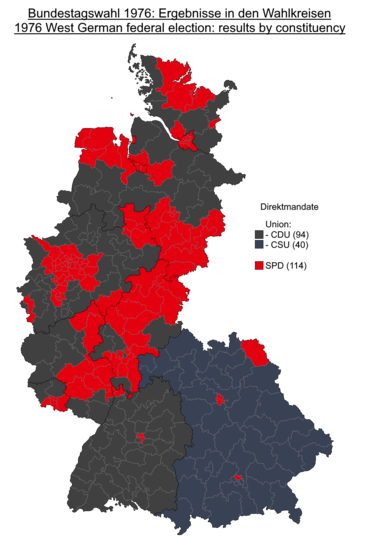 Helmut Schmidt was re-elected as Federal Chancellor with the votes of the social-liberal coalition in the Bundestag. Helmut Kohl moved to Bonn as the opposition leader of the CDU / CSU, he resigned his office as Prime Minister of Rhineland-Palatinate, and in addition to the party chairmanship he took over the chairmanship of the CDU / CSU parliamentary group .

The previous opposition leader, Karl Carstens , was first elected as the new President of the Bundestag and in 1979 as Federal President.