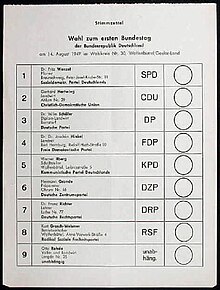 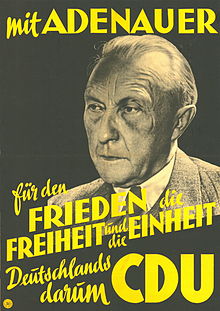 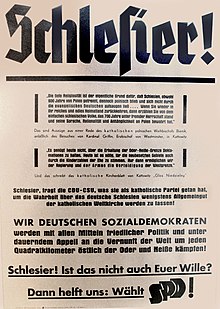 Election poster of the SPD

The election took place only in the newly established Federal Republic of place, the Basic Law on behalf of the three Western occupying powers from the Parliamentary Council in Bonn worked out, approved by them, with the exception of Bavaria by all provincial assemblies in the three western zones adopted and then on 23 May 1949 announced had been. This Basic Law only stipulated that the members of the German Bundestag should be elected for four years in general, direct, free, equal and secret elections. The rest of the matter was regulated by the electoral law for the first Bundestag and the first Federal Assembly of the Federal Republic of Germany , which the Parliamentary Council decided and which the Prime Ministers of the federal states had made with the changes made by the Allied military governors .

The mandates were then distributed at the state level. The five percent hurdle only applied nationwide. In order to move into the Bundestag, a party only needed to get five percent of the vote in one country or to win an electoral district directly, which limited the effect of the threshold clause. However, parties that were nationwide over 5% received no seats in the federal states in which they neither won 5% nor a direct mandate. In contrast to all later federal elections, voters only had one vote. Eleven parties were represented in the first Bundestag, including the Südschleswigsche Voters' Association with MP Hermann Clausen . The three independent MPs were Eduard Edert from the Flensburg constituency , Richard Freudenberg from the Mannheim-Land constituency and Franz Ott from the Esslingen constituency . In Flensburg the CDU, FDP, DP, Zentrum and DKP / DRP had renounced their own candidates in favor of Ederts and in Mannheim-Land the FDP / DVP in favor of Freudenberg. Ott belonged to the expellees' organization Notgemeinschaft Württemberg-Baden , which had not received a party license from the occupying powers.

The number of parties was limited, since until March 17, 1950 parties needed a license from the respective occupying power.

The first Bundestag had 410 members, including 402 members with full and eight Berlin members with limited voting rights. The high voter turnout of 78.5% was also seen politically as approval of the electorate for the Basic Law, which only the state parliaments had voted on.

On February 1, 1952, eleven additional Berlin MPs entered the Bundestag, bringing the total number of MPs to 421.

The result was as follows:

1In brackets the number of Berlin Bundestag members elected on the same day by the Berlin City Council who do not have full voting rights . On February 1, 1952, another four SPD, three CDU and four FDP members joined the Bundestag from Berlin.

The strengths of the factions changed in the course of the legislative period due to conversions and by-elections . On the day of the Chancellor election, September 15, 1949, one of the three independent MPs joined the CDU / CSU and one from the FDP parliamentary group. Heinrich Leuchtgens , who was elected via the Hessian FDP state list, became a member of the DRP parliamentary group. 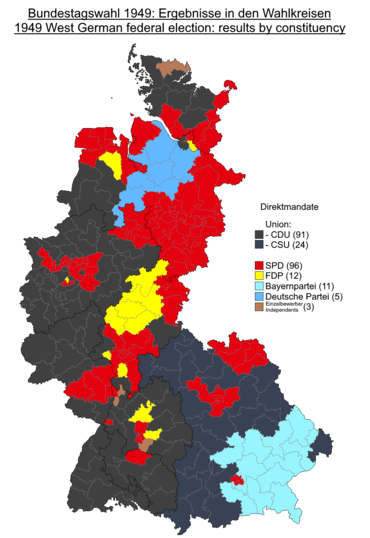 The results in the individual countries:

The Bundestag was constituted on September 7, 1949.

Although large parts of the CDU were in favor of a coalition with the SPD, Konrad Adenauer was able to push through a coalition with the FDP, in which the DP was also accepted in order to achieve an absolute majority. Adenauer benefited from the fact that SPD chairman Kurt Schumacher committed his party to an opposition role against internal resistance. Part of the coalition agreement was the election of Theodor Heuss as Federal President. On September 15, 1949, Adenauer was elected Chancellor with 202 votes, 142 against and 44 abstentions; he received exactly the number of votes required to achieve an absolute majority.

The coalition government made up of CDU / CSU, FDP and DP remained in office for the full electoral term until 1953.