The 1969 federal election took place on September 28, 1969; it was the election for the 6th German Bundestag . After this election, a social-liberal coalition was formed at the federal level for the first time in the then 20-year history of the Federal Republic of Germany . For the first time, the Union parties no longer provided the Federal Chancellor , although they continued to form the largest parliamentary group (as had been the case from 1949 until this election) . 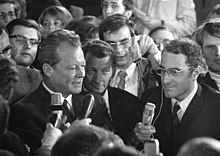 Willy Brandt during an interview with Peter Merseburger on election evening 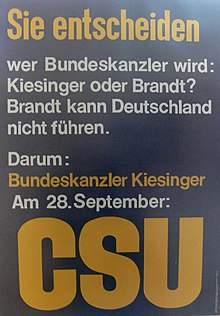 Election poster of the CSU 1969

This was preceded by a change of Chancellor in 1966 during the current legislative period . Chancellor Ludwig Erhard resigned on November 30, 1966 after the coalition of CDU / CSU and FDP broke up on economic policy issues . The previous Prime Minister of the State of Baden-Württemberg, Kurt Georg Kiesinger , who formed a grand coalition of CDU / CSU and SPD ( Kiesinger cabinet ) , was elected as his successor . Federal Foreign Minister and Vice Chancellor became Willy Brandt , previously Governing Mayor of Berlin . The appointment to the federal government was decisive for Willy Brandt to run again, contrary to a renunciation of a renewed candidacy for chancellor declared after the federal election in 1965 .

Brandt stood for the third time as candidate for chancellor of the SPD, Kiesinger for the CDU / CSU for the first time.

For the second time since 1949 , the parties forming the government received less than half of the votes cast in an election. The SPD and FDP received the majority of the seats in the Bundestag because the NPD failed with 4.3% of the five percent hurdle .

¹ in brackets: number of Berlin Bundestag members elected on the same day by the Berlin House of Representatives who are not entitled to vote 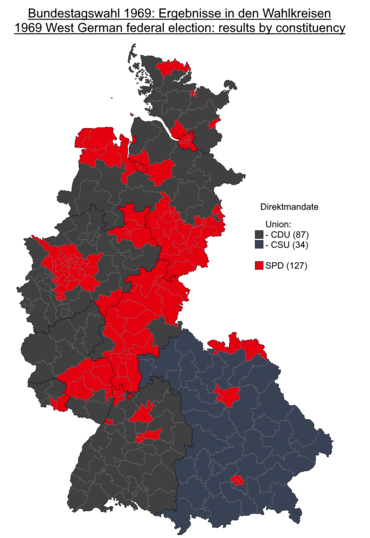 On October 21, 1969, Willy Brandt was elected Chancellor by a narrow majority of the social-liberal coalition . This made him the first social democratic chancellor of the Federal Republic. The formation of a government, from election day to the swearing-in of the cabinet on October 22, took a total of only 24 days - much shorter than in all previous elections. The social-liberal coalition continued until 1982.

By turning away from the Union, the FDP got into violent wing battles. Part of the FDP organized itself in the National Liberal Action and later in the German Union . A number of FDP members of the Bundestag around Siegfried Zoglmann left the party and switched to the opposition.

The NPD was unable to continue the series of electoral successes it had achieved during the time of the grand coalition and failed in all state elections in 1970 because of the five percent hurdle. Since then she has never again entered a West German parliament.