Election poster with Helmut Kohl , Leipzig 1990. Kohl holds the record of having been a candidate for chancellor six times (1976 and between 1983 and 1998, the first time as opposition leader).

In accordance with Article 63 of the Basic Law for the Federal Republic of Germany, the Federal Chancellor is not elected by the people, but by the German Bundestag on the proposal of the Federal President. This is especially true for the beginning of a new legislative period of the Bundestag, because at that time the term of office of the former chancellor ends and thus to choose a new chancellor and a new government is to be formed. Since the majority in the Bundestag is also decisive for the election of the Chancellor, the two major parties traditionally nominate a candidate for Chancellor before the Bundestag election in order to show the eligible population who they think should become Chancellor.

At the SPD party conference in Hanover in 1960, a German party elected a candidate for chancellor for the first time. It was the Governing Mayor of Berlin Willy Brandt . The SPD strategist and long-time companion of Brandt Egon Bahr said in retrospect that the then member of the Bundestag Klaus Schütz brought this idea with him from the USA when he was watching the election campaign of the Democratic presidential candidate John F. Kennedy .

With the exception of Angela Merkel in 2021, the incumbent Chancellor has run again each time in the next federal election in order to be able to continue in office with the support of the voters. Nevertheless, there may be a discussion in the Chancellor's party about whether the incumbent should run again, as was the case in the run-up to the 1998 Bundestag election , when voices in the CDU called for a “generation change” from Chancellor Helmut Kohl , who has been in office since 1982, to the CDU / CSU parliamentary group leader Wolfgang Schäuble demanded.

Specifying a candidate for chancellor - a position with great media effectiveness - can lead to strong disputes within the party, especially with the respective opposition party, for example in the run-up to the 2013 federal election when the party chairman Sigmar Gabriel , chairman of the SPD parliamentary group in Frank- Walter Steinmeier and the former Federal Minister of Finance Peer Steinbrück three names were discussed in the SPD as candidates for chancellor.

The sister parties CDU and CSU nominate a joint candidate; So far the election has been made twice, in 1980 and 2002, for a CSU candidate (namely the respective party chairman Franz Josef Strauss and Edmund Stoiber ). In the run-up to the federal election in 2002 , the term Chancellor question ( K question for short ) was coined for the decision between the two possible Union Chancellor candidates - CDU chairmen Angela Merkel and Edmund Stoiber . Usually, a candidate for chancellor who challenges an incumbent chancellor is party or parliamentary group chairman or head of government of one of the German states - exceptions were or are the chancellor candidates for the SPD by Hans-Jochen Vogel 1983, Frank-Walter Steinmeier 2009, Peer Steinbrück 2013 and Olaf Scholz 2021. Three times (1969, 2009 and 2021) the acting deputies of the Federal Chancellor , Willy Brandt, Frank-Walter Steinmeier and Olaf Scholz , who served in a grand coalition of CDU / CSU and SPD, stepped or stepped . as candidate for chancellor. Usually, the candidate for chancellor receives first place on the state list from his home state association . 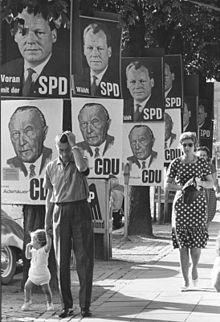 A development that only came to its preliminary conclusion in the course of the 1950s brought a change here: the concentration of voters on a few competitive parties and the associated development of the CDU, CSU and SPD into large popular parties with the prospect of an absolute majority of the Mandates in parliament or on an alliance with a smaller coalition partner. Only now were these parties able to realistically claim that if they won the election they would actually be able to assert their candidate as Federal Chancellor. Before a candidate for Chancellor, Willy Brandt, was expressly nominated for the first time in 1960, the respective party and parliamentary group leaders of the opposition were regarded as “natural” candidates.

Shoes with the number “18” on the sole: The FDP chairman Guido Westerwelle presented himself in 2002 as a candidate for Chancellor in accordance with Strategy 18 , who was supposed to win 18 percent of the vote. It was 7.4 percent.

After the nomination was made a chancellor candidate long time only by the two major parties represented in the Bundestag CDU / CSU and SPD, which has named FDP for 2002 elections with its leader Guido Westerwelle also the first time a candidate for the chancellorship. The nomination was made with the aim of appearing in a personalized media environment on an equal footing with the Chancellor candidates Gerhard Schröder (SPD) and Edmund Stoiber (CDU / CSU), and as a supplement to the official election target of achieving 18 percent of the second votes (“ Strategy 18 "). The attempt to force the participation in the television debates of the candidates Schröder and Stoiber by a court decision brought the FDP a defeat before the Federal Constitutional Court :

"Accordingly, the complainant's chairman is ruled out because he - which the complainant ultimately does not deny herself - has no realistic prospect of assuming the office of Federal Chancellor after the election on September 22, 2002."

- Extract from the court decision

For the parliamentary elections 2021 with annalena baerbock established a chancellor candidate of Alliance 90 / The Greens for the first time after the party continuously since about October 2018 poll numbers have been certified as the second strongest force after the CDU / CSU and thus ahead of the SPD.