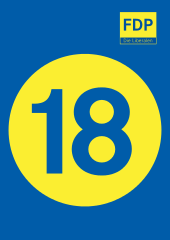 Election poster of the FDP for the federal election 2002

With Strategy 18 , also Project 18 , called the campaign strategy was FDP for 2002 general elections called. In May 2001, the Düsseldorf Federal Party Congress of the FDP decided on the strategy that "with new forms of communication and representation ... should open up new groups of voters" for the party and position the FDP as an independent and independent political force outside of a given camp. The name referred to the electoral goal to triple the proportion of the vote from 6 to 18%. In the midst of controversies about a possibly related right-wing populist orientation, the FDP ultimately achieved 7.4% and moved away from this course after the election.

In 1999 the FDP found itself in a crisis that threatened its existence. In the Bundestag election on September 27, 1998 , she lost the decade-long government participation in a coalition with CDU / CSU to the red-green coalition , and both in the European elections on June 13, 1999 and in most of the 1999 state elections , she failed on the five Percent hurdle .

Against this background, Jürgen Möllemann , then state chairman of the FDP NRW, had Fritz Goergen develop an election campaign concept for the state elections in May 2000 . It was named "Werkstatt 8"; it was under the motto “NRW needs speed. Möllemann. ”The topics of education, traffic jams, bureaucracy and security come to the fore. Guido Westerwelle, the General Secretary at the time, was “very impressed” with the overall concept. During the campaign, one poster was particularly controversial: it showed Adolf Hitler between Osho and Freddy Krueger with the subtitle “If we don't find teachers quickly, our children will find them themselves.” The share of the vote rose from 4 to 9.8 percent to be doubled. During the election campaign, the "media conveyance of emotions and diffuse resentment ... the FDP was stylized into a protest party similar to the FPÖ ... and Möllemann into a tribune in the style of Haider". The election success prompted Möllemann to propagate more ambitious goals for the federal FDP. The use of the number 18 has also been interpreted as a right-wing extremist symbol , as this is a code common in the neo-Nazi scene for the initials of Adolf Hitler (the 1st and 8th letters of the alphabet).

At the following federal party conference in 2001, with the election of Guido Westerwelle, it was decided to turn away from the previous image of the FDP as a “party of high earners” . The concept remained controversial in the party leadership. After the FDP won only 5.1% of the votes in the conventionally conducted election campaign for the state elections in Hamburg in September 2001 , while the right-wing populist Schill party immediately gained 19.4% of the vote, the ideas of Westerwelle and Möllemann prevailed. Goergen was one of Westerwelle's election campaign advisors from January 2002 and worked on Project 18.

The other ideas of Strategy 18 were not new: The idea for the candidacy for chancellor came from Ralf Dahrendorf , the breaking out of the bourgeois camp had been postulated decades earlier by Wolfgang Döring and Karl-Hermann Flach .

Westerwelle's shoes, with which he also advertised Project 18 on television

The aim of doubling the result from NRW to 18% for the Bundestag election should also be achieved using methods similar to those used in “Werkstatt 8”. Guido Westerwelle advertised Project 18 in a yellow-blue Winnebago Elanté 37 motorhome , built around 1992, which was named “www. guidomobil .de “and was used at public festivals, swimming pools and beaches as well as at a McDonald's branch. Westerwelle sometimes wore coordinated clothing and tried to attract interested citizens to his party. Among other things, he also paid a visit to the Big Brother container. This form of election campaign was often referred to and criticized in the media as a joke campaign .

According to Westerwelle, an "equidistance" - an ideologically equal distance - should be created to the popular parties CDU , CSU and SPD , which should enable the FDP to enter into a new coalition at any time. The liberalism should more emphasis be enforced awarded and so own positions in total, which was subordinated until then, according to many party Active too strong coalition discipline, and similar considerations.

Möllemann, the leader of the FDP parliamentary group in the state parliament of North Rhine-Westphalia, supported Jamal Karsli's attacks on the Israeli government in April 2002 because of its actions against the Palestinians . Some received or rated this as Möllemann's targeted anti-Semitism in the federal election campaign. Some leading FDP politicians strictly rejected Karsli's faction change from the Greens to the FDP. Karsli finally resigned from the FDP in June. In the course of the dispute, Möllemann also criticized Michel Friedman , the then Vice-President of the Central Council of Jews in Germany. Shortly before the general election, Möllemann released the leaflet “Klartext. Courage. Möllemann ”as direct mail to households in North Rhine-Westphalia. In this paper he sharply attacked Israel’s Prime Minister Ariel Sharon and Friedman. The resulting anti-Semitism debate thwarted Westerwelle's “fun election campaign” and increased tensions between Westerwelle and Möllemann.

In the 2002 Bundestag election , the FDP finally achieved 7.4% of the vote; the red-green coalition under Chancellor Gerhard Schröder was able to continue to govern . On the evening of the election, the moderator of the elephant group Hartmann von der Tann, Guido Westerwelle, asked : “Mr. Westerwelle, are 18 minus Möllemann seven?” Westerwelle replied that it was not only Möllemann's fault; the FDP was "below its possibilities". Fritz Goergen left the party.

Since the election, the party’s conflicts over Westerwelle’s leadership style and Möllemann’s behavior have intensified. Hildegard Hamm-Brücher (1921-2016) resigned from the FDP after more than fifty years of membership. She called for a review of the “campaign strategy 18 that was wrong from A to Z”. This includes that not only Möllemann, but also the party chairman as a candidate for chancellor is responsible. On the other hand, she turned against the "rapprochement of the FDP to the anti-Israeli and one-sidedly pro-Palestinian positions of Mr. Möllemann" and found the demarcation of Westerwelle inadequate. The Hessian state chairman Ruth Wagner asked Möllemann to leave the FDP because of the affair surrounding his “anti-Semitic” leaflet. Möllemann resigned the chairmanship of the parliamentary group and the regional association in October 2002 and preceded a party exclusion procedure by leaving the FDP in March 2003; he died in June 2003 (see The Möllemann Affair 2002/2003 ).

Although the FDP was able to mobilize an above-average number of young voters through the “fun election campaign”, the controversies surrounding Möllemann led to a departure from the project. At the FDP federal party conference in 2004 - one year after Mölleman's death - the turning away from Project 18 and the “fun party” was demonstratively emphasized. In the commercials for the 2005 Bundestag elections , the FDP, in the person of its chairman Westerwelle, presented itself seriously and in a way that supported the state.

Parts of the public perceived Project 18 more as a media production and not as an independent election concept. Even before Westerwelle became candidate for chancellor in the federal election campaign in 2002, some media attributed the FDP to the image of a “fun party”. The media scientist Christian Schicha summarized this with the words: Möllemann “recognized that the personalized form of political communication is an important yardstick for political success.” The media staging of a politician would become questionable if “the presentation of the actual content is too strong dominates and problem-solving skills are replaced by populist appearances. "