As Palestinians, all residents in the entire League of Nations Mandate were originally considered to be Palestine . Today this term is mainly used for the Arabic- speaking residents in the West Bank and the Gaza Strip as well as for relatives living in other countries. For Palestinian Arabs in Jordan and Jewish residents of Israel , this term is no longer in use, even if it is “ Saber ” (Jews born in Palestine) from the mandate period . Arabs with Israeli civil rights are often referred to as Israeli Palestinians or Arab Israelis . Officially, the second term is preferred in Israel and Palestinians are used primarily for the citizens of the autonomous areas. Druze, as well as parts of the Bedouins from the Palestine region , who today mostly live in Israel, do not count themselves among the Palestinians or are not counted among the Israeli state. To date, defined UNRWA much of the Palestinian people as refugees , because the status of "Palestine refugee" ( "palestine refugee" ) is inherited paternal line, now about 3.7 million of the more than 9.0 million Palestinians worldwide.

Most of the Arab Palestinians in the Palestinian Territories are Muslim ( Shafiite ). After above-average emigration and expulsions since the middle of the 20th century, the minority of Christians has shrunk from around 15% to 1.5%. Within the borders of Israel (including parts of Jerusalem which Israel has occupied since 1967), the proportion of Christians in the Arab population (including Druze) was 8% in 2008, compared with 21% in 1950. Palestinian Christians are predominantly members of the Orthodox Church ( Patriarchate of Jerusalem ).

The term "Palestine" comes from the Roman province of Palestine ( Hebrew פלשת, Pleshet down) and was used by the British as a term for their mandated territory seized after the end of World War II. The first attempts at national independence for the region, which was then under Ottoman rule, began on the Jewish side at the end of the 19th century and on the Arab side at the beginning of the 20th century. In the Faisal-Weizmann Agreement of 1919, these efforts were formulated by mutual agreement.

The term "Palestinians" in its present meaning only existed since the Charter of the PLO in 1964. In UN resolutions was of "Palestine refugees" is mentioned, which also included Jews. But the relevant provisions of the United Nations Relief and Works Agency for Palestine Refugees in the Middle East (UNRWA) influenced the subsequent redefinition of the term “Palestinians”. "Palestinians" did not appear in official documents of the Federal Republic of Germany at that time.

First approaches to state formation in the mandate area 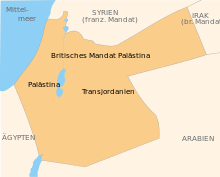 The Mandate Territory of Palestine in the borders from 1920 to 1923 (including Cis and Transjordans )
→ Main article : League of Nations mandate for Palestine
See also : Palestinian Territories , Nakba, and expulsions of Jews from Arab and Islamic countries

On March 25, 1923, Transjordan (78% of the entire mandate area) became semi-autonomous and therefore inaccessible to Jewish settlements. On March 22, 1946, Transjordan gained independence from Great Britain and in 1950 was named the Hashemite Kingdom of Jordan . In the wake of the escalating Middle East conflict , several different partition proposals were made into an Arab and a Jewish state, which then resulted in the UN partition plan in 1947 . After the end of the British mandate in May 1948, was carried founding of Israel by residents and immigrant Jews , while the Arab side rejected the United Nations partition plan, claimed the entire area and the Palestine war began. Jordan subsequently annexed the West Bank and the eastern part of Jerusalem with the Old City; the Gaza Strip fell under Egyptian occupation. Since the Six Day War of 1967, the West Bank has been under Israeli control with limited Arab-Palestinian autonomy. Under the Sharon Plan , Gaza was evacuated by Israel in 2005 and is currently controlled by the Islamist Hamas ; today there is no longer a Jewish population in the Gaza Strip.

The pan-Arabism was at the beginning of the 20th century in response to the Ottoman imperialism and initially found among the Palestinian Arabs in the sense of connection of Palestine to its neighbors some encouragement, however, the decreased more and more in the course of the century. After the establishment of Israel, the Syrian-controlled as-Sa'iqa under Zuheir Mohsen tried to join the Palestinian territories to the Syrian state, which also failed. Today many Palestinians see themselves as belonging to a Palestinian nation. The flag of the Palestinian Authority, the Arab revolutionary flag of 1916, is often a sign of this identity.

In exile, in Jordan and in the Gulf States, according to Christopher Hitchens , the Palestinians initially played a positive role. With the exception of Jordan, they never had full civil rights, but they were well educated, secularly oriented and cared little about regulations on alcohol consumption, music, culture and restrictions on freedom of expression. According to Hitchen, it has become fashionable for some Arab reporters to describe the Palestinians in the diaspora positively as Jews of the Middle East . This ended abruptly with the expulsion of the Palestinians from Kuwait in 1991 .

Under his leadership, the United Nations declared the Palestinians a subject of international law. In addition, Arafat's PLO achieved the establishment of the Palestinian Authority , which today has observer status within the UN, but is not actually a state.

Arafat's support for Saddam Hussein's invasion of Kuwait sparked the displacement of the Palestinians from Kuwait in 1991 . Immediately after the Second Gulf War , the 450,000 or so Palestinians living in Kuwait were almost completely expelled , and other Palestinians in the Gulf States were also excluded and discriminated against. Loss of assets running into billions and the collapse of support for the PLO in the Gulf States were the result. The resulting loss of power of the PLO and its strongest political faction, Fatah , strengthened the Islamist Hamas, which emerged from the Egyptian Muslim Brotherhood . This movement is in conflict with the goals of Fatah, which continue to be the establishment of a secular state of Palestine that is independent of the neighboring Arab states. The 1988 Hamas charter denies Israel's right to exist and calls for “to raise the flag of Allah over every inch of Palestine ”; Israel is claimed as an "Islamic homeland" ( Waqf ).

The Oslo peace process , which was started in 1993 by Fatah leader Arafat and the then Israeli Prime Minister Yitzhak Rabin , ended with Israel accepting the PLO as the official representative of the Palestinians and the PLO undertaking to remove all passages from its Palestinian National Charter name the destruction of Israel as a goal, to delete. Arafat was allowed to return to the Palestinian Territories with Fatah . As a result, Rabin and Arafat received the Nobel Peace Prize .

According to UNRWA , 3.7 million Palestinians are recognized as refugees. These are people who have been displaced or fled from their traditional areas, as well as their descendants.

However, the Jordanian authorities do not publish any official statistics on how many residents are of Palestinian descent. Estimates are between 50% and 80%.

On October 20, 2004, the Palestinian Statistical Office announced the official worldwide number of Palestinians as 9.6 million; in 2001 it was 8.8 million according to statistics.

Handala on a wall in Bil'in

Solidarity with the Palestinian people: GDR postage stamp from 1982